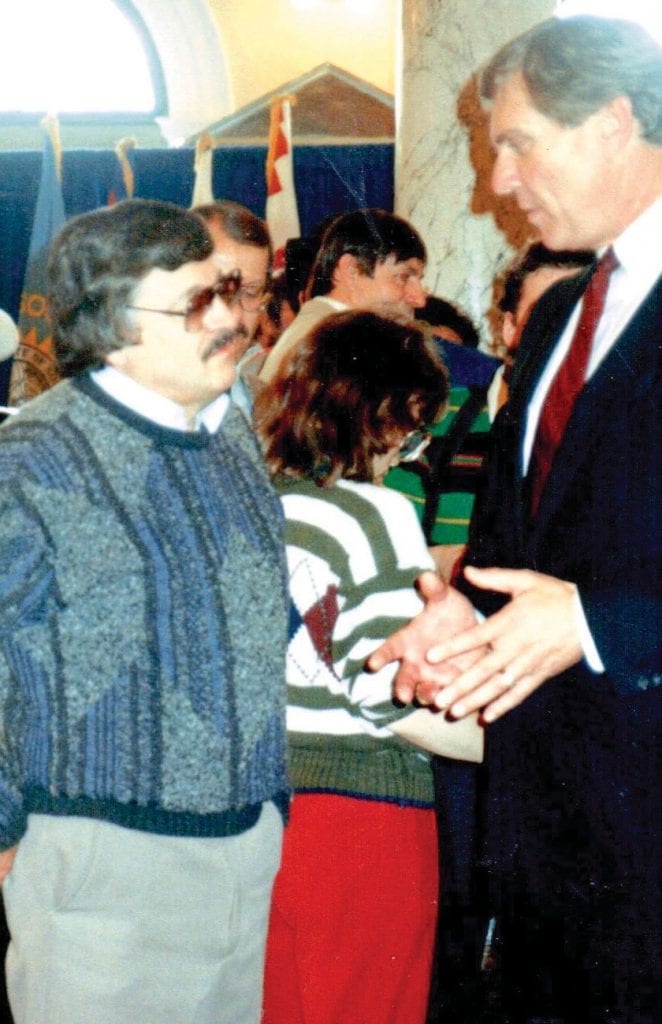 Tim Giago, left, is shown with the late Gov. George Mickelson in 1990. Giago lobbied the governor to proclaim 1990 a year of peace between Indians and non-Indian people.

The state of Minnesota proclaimed 1987 a Year of Reconciliation. The formal proclamation commemorated the 125th anniversary of the U.S. Dakota conflict of 1862. But more than that, it was designed to bring about a healing of wounds between the Indian and non- Indian people.

At a conference last week sponsored by the South Peace and Justice Center and held in Watertown, S.D., I was honored to be one of the speakers. Prior to that I had visited at length with good Hunkpapa friend Harold Iron Shield and he told me about how he had helped to coordinate some of the activities in Minnesota in 1987.

I decided to broach the subject during my presentation by suggesting to the largely non-Indian audience that they call upon their elected representatives and upon you as Governor, to make 1990 a Year of Reconciliation for the State of South Dakota.

The significance of 1990 should not go by without an all-out effort by those in leadership positions to help solve the major problem within this state: The racial discord between the whites and Indians.

The year 1990 will also be the year that Indians from across this nation and from across the State of South Dakota will hold special events to commemorate the Massacre at Wounded Knee. It was on December 29, 1890, that nearly 300 Lakota men, women and children were shot down in cold blood by soldiers of the Seventh Cavalry at Wounded Knee Creek.

It has always been my contention that South Dakota will never achieve a status of greatness until it faces up to the racial problems within the state and begins to make an effort to solve them.

Having visited North Dakota and Montana, I can assure you that the racial conditions in those states are as bad as or worse than they are in South Dakota.

It should be up to the leadership to bring about change and you are now being offered the opportunity to make a small beginning toward healing the wounds that have torn this state apart for more than a century.

Our elected officials in the U.S. Senate and House of Representatives should stand at your side and offer their assistance in proclaiming 1990 a Year of Reconciliation between the races.

While listening to a radio talk show in Watertown a few months back dealing with the Bradley Bill, the proposal to return a portion of the federal lands in the Black Hills to the Tribes of the Great Sioux Nation, a friend of mine was appalled at the bigotry that wove its way into the conversation of the callers.

He wrote down the most of the comments made that morning as one reads them, it is apparent that there are many prejudiced people living in this state who do not even realize they are prejudiced. As a matter of fact, most of their racial comments were made from a position of ignorance.

And that is what a state proclaimed year of reconciliation can begin to do; start to educate the people of this state about the minorities who are their neighbors. But, in my opinion, that education must begin at the top.

Our elected leaders are supposed to represent all of the people of the state and when some of them issue statements based upon half-truths and outright fiction about Indians, they only serve to create more tension between the races.

Our leadership should become truly non-partisan when it comes to dealing with issues between the races and instead of inciting anger among their white constituents based upon rumor, they should act as sounding boards for both sides and initiate contact through meetings between the races in order to promote understanding based upon communication.

Man fears most that which he does not understand, wrote one philosopher many years ago and that statement is as true as today as it was then.

I call upon the leaders of the Great Sioux Nation and upon the Indian leadership in the other states celebrating centennials to urge their elected officials to also initiate a year of reconciliation in 1990.

What better time to reconcile our differences than during the anniversary of one of the most heinous actions ever carried out by one people against another: the Massacre at Wounded Knee.

We implore you, Governor Mickelson, to get the ball rolling.

Just recently, my mother asked me if I was ever troubled about Native American/white relations in South Dakota.

When I confirmed this was one of the most troubling areas facing me as governor, she recalled that my father, who served as governor in the late 1940s, mentioned time and time again that strife between the races was a frustrating, ongoing dilemma in his administration as well. She and I wondered how, in 40 years, so little improvement could be realized.

As little improvement as there has been, I do believe there has been some progress. Some of that can be attributed to the work of Dr. Martin Luther King who made many of us realize we should celebrate our racial differences and draw on those differences for the betterment of all. And, some of that progress can be attributed to the people right here in South Dakota – Indians and non-Indians who for those 40 years and more have striven to understand our differences to educate those of us who have grown up together but who have never made the effort to bridge the cultural gap.

I couldn’t agree with you more, Tim. We must reconcile those differences. As the state of South Dakota celebrates the beginning of its second century, we must also remember that statehood was a very side time for the Native American. Two of the greatest tragedies in Dakota history happened just thirteen months after South Dakota became a state. In December 1890, Sitting Bull was murdered near Mobridge and a group of nervous, inexperienced soldiers opened fire and killed more than 300 Indians at Wounded Knee. Two-thirds of the dead were defenseless women and children.

Because 100 years is a significant milepost, the state’s centennial and the centennial of the Wounded Knee Massacre are good times to look back at how we can better understand how and why things are done today by looking at how and they things were done 100 years ago, 75 years ago, or even 40 years ago when my father was governor.

I believe your suggestion that we, you and I, as well all the citizens, observe 1990 as a year of reconciliation is an excellent idea. And, for my part, I will be happy to prepare such a proclamation. But, in anticipation of that, and in order to ensure that the proclamation be more than just the paper on which it is composed, I would ask you and others to help me prepare it. We must determine not only that we will educate each other, but how we will educate each other. We must decide not only to improve communication, but how we will do it. We must have a plan so that when we reach the end of this year of reconciliation, we can also show some kind of measurable improvement.

I do not want my own children to look back over 40 years and see little progress in solving racial discord in South Dakota, Tim. I look forward to hearing your suggestions and those of your readers – Indians and non-Indian – as we count 100 years of history.