A radio station for Eagle Butte 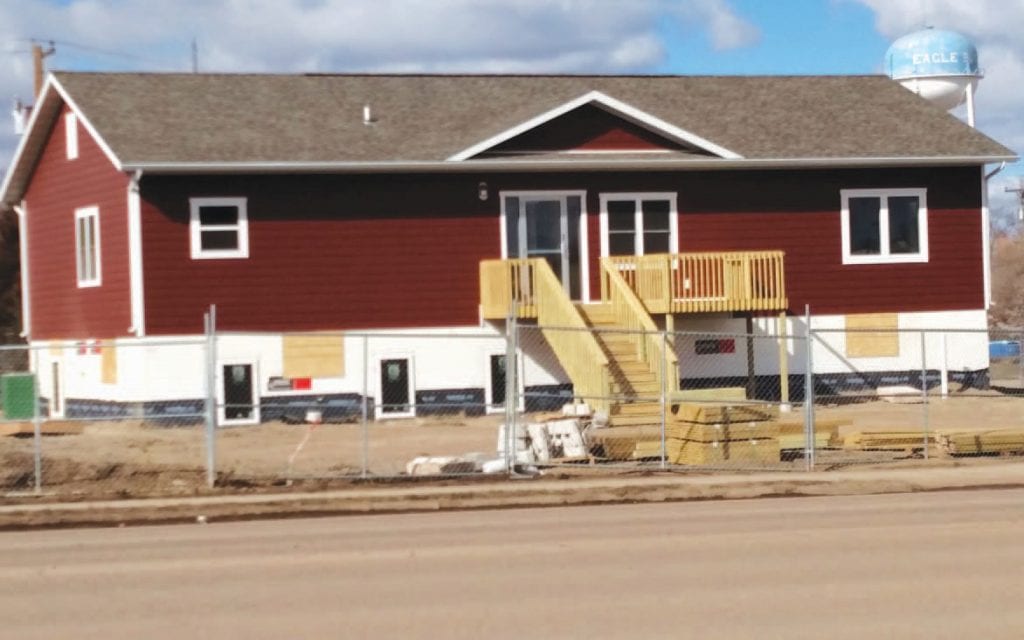 Work continues on the new headquarters for the new radio studio in Eagle Butte. Listeners can find the station, which should be operational by July 1, at 93.5 FM on the radio dial.

EAGLE BUTTE –– For decades the airwaves above the Cheyenne River Indian Reservation were filled with the tunes of Credence Clearwater Revival, Waylon, Willie and the Boys streamed live from KLND 89.5 FM radio in Little Eagle, S.D.

But beginning July 1st, members of the Cheyenne River Sioux Tribe will begin enjoying their very own radio station, streaming live from Cheyenne-Eagle Butte at 93.5 FM on the radio dial.

According to project manager Tom Eagle Staff, Cheyenne River relied on KLND for broadcasting and the sister tribes enjoyed a good working relationship for years.

“What they were doing before then is Tribal Ventures was working with KLND and trying to enhance their programming so that it would include Cheyenne River programming as well,” Eagle Staff said.

In 2003, CRST was one of three tribes chosen by the Northwest Area Foundation (NWAF) to address the root causes of poverty. NWAF invested $9.5 million dollars, with a CRST match of $1.5 million, with the goal of boosting the reservation economy. Cheyenne River Tribal Ventures was the entity created to administer the grant and devise a ten year plan for poverty reduction.

Part of the plan they mapped out for Cheyenne River included an initiative to improve communication reservation wide to strengthen unity amongst the people. So in 2011 they partnered with KLND and created a remote broadcast studio located in the Lakota Technologies Inc. building with equipment and a portable broadcast unit purchased with funding from the initiative.

However KLND began experiencing problems with continuity in their broadcasting and Eagle Staff set out to help them, but found himself on a different path.

“If you remember for two years in a row KLND went off the air for about six months. The second year it went off the air, I came in and approached Eileen Briggs director of Tribal Ventures at that time to see if they could help KLND,” he said.

Briggs informed him about the CRST initiative for improved communication and gave him the nod to conduct a feasibility study on the possibility of Cheyenne River constructing their own radio station.

“I started following up on that and found that the FCC had a new rule at that time called the Tribal Priority Rule. Because the FCC didn’t have any windows open at that time for new non-commercial FM radio stations like KLND, KILI, KINI and other PBS radio stations,” Eagle Staff said.

According to the FCC, in 2010, through President Obama’s stimulus package, the FCC established a Tribal Radio Priority to expand the number of radio stations owned by American Indian Tribes broadcasting to Tribal lands. The Tribal Priority is a FCC rule through which Tribes or Tribally owned or controlled entities may more easily obtain broadcast radio licenses in both the AM and FM bands. The Tribal Priority is intended not only to provide radio service tailored to specific Tribal needs and cultures, but to increase ownership of such radio stations by Tribes and Tribally owned entities. In doing so, the Tribal Priority also fosters localism and diversity of ownership.

“The need for Tribal radio stations is clear. There are 566 federally recognized American Indian Tribes and Alaska Native Villages. Approximately one-third of the 4.1 million Native American population lives on Tribal lands, which comprise over 55 million acres, or 2.3 percent of the area of the United States, exclusive of Alaska. Despite this, fewer than 100 broadcast radio stations are licensed to Tribes or affiliated groups, a fraction of one percent of all radio station owners. We have visited many parts of Indian Country and we have seen how people in Native Communities can benefit from radio – to prepare for and recover from emergencies, to preserve Native culture, language and music, and to convey important information to Tribal members,” the FCC states.

Eagle Staff said he conducted the feasibility study and determined that the Cheyenne River Sioux Tribe could sustain a commercial radio station and that the commercial venture could be successful.

The feasibility study was presented to the tribal council who gave Tribal Ventures carte blanche in applying for a Commercial radio station license with the FCC.

“We are at the point where we are waiting for a tribal construction permit and that will enable us to formally begin constructing our radio station tower and antenna. We have our building identified for the studio in Eagle Butte,” which he said was purchased with a grant from the Shakopee Mdewakanton Sioux Community. The new studio building is located across the street from Lakota Thrifty Mart on the west side of Main Street.

“We put a down payment on all our equipment and we are just waiting for a construction permit from the FCC so we can begin setting everything up,” he said. “With the license we’ll be identifying what our call sign will be and then we’ll get our license as that entity.”

The FCC has assigned the frequency of 93.5 FM for the new radio station and the tower will be constructed one and a half miles north of Eagle Butte. The radio station will be a for-profit commercial venture.

“We will be selling advertising and programming to maintain our operations,” he said. “We will use our website as well as the airwaves to sell our advertising.”

The station will employ four full time and four part time staff members with plans to be operational by July 1st and they will begin recruiting staff sometimes in April or May.