A Sioux Cowboy Hall of Fame 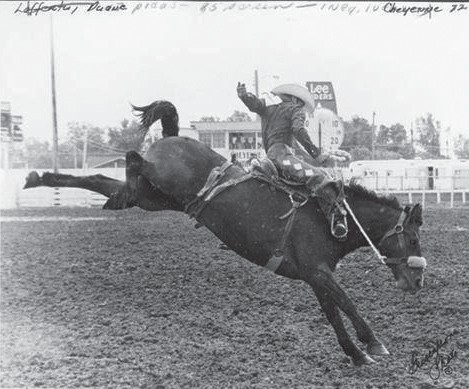 Coming back from the Denver Stock Show, I was reminded about a past effort to establish a Native American hall of fame in South Dakota.

Two Lakota-descendent rodeo cowboys, Dugan Le- Beaux and Duane “Boy” Lafferty, made up their minds in 1980 to promote a Sioux Indian Cowboy Hall of Fame.

Both had plenty of rodeo experience. LeBeaux started racking up state bull riding championships at a young age before competing in the pro rodeo ranks. He made a name for himself at rodeos in the Southwest.

With his size and classic riding style, Lafferty was the perfect fit as a professional saddle bronc rider traveling regularly with LeBeaux and the legendary Howard Hunter. He was once told he turned out his toes “way too much.” 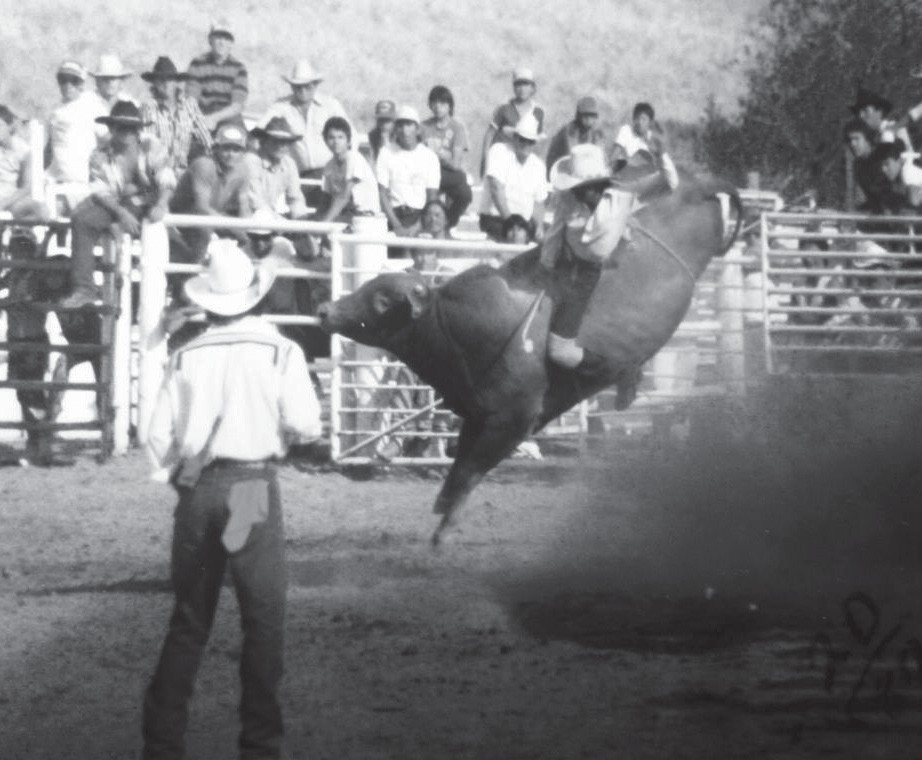 Dugan LeBeaux takes on a rampaging bull at Pine Ridge.

As promoters, their vision was to recognize Native American cowboys from ranching backgrounds along with rodeo competitors. To do this, they would publish a grass-roots newspaper, the Sioux Nation Cowboy News.

Neither had publication experience. There were no finances to hire staff. So they turned to Little Wound School administrator Rick Albers for the volunteers and technical support to start the printing press in Kyle, S.D. 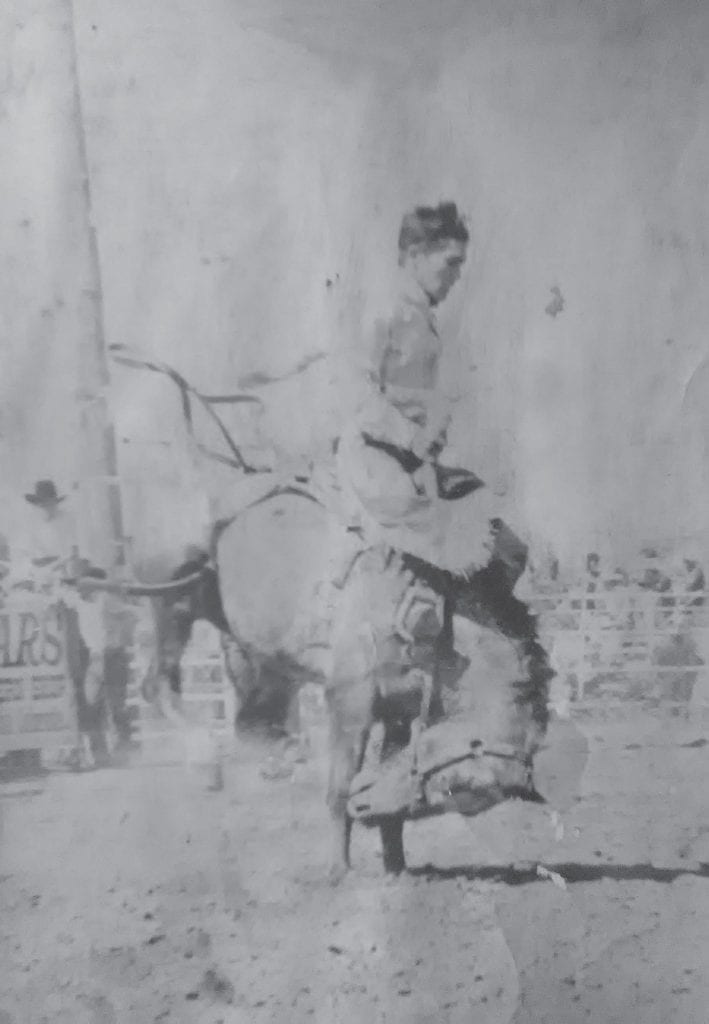 For the next several years, a monthly newspaper carried the oral stories about Native American cowboys and cowgirls for a nominal subscription fee.

Early on, LeBeaux and Lafferty appeared to have generous public support for an Indian cowboy hall of fame.

“After getting the newspaper started, we needed more people to help us get off the ground,” LeBeaux said in a recent interview. “So we gathered up rodeo folks interested in creating an organization.” 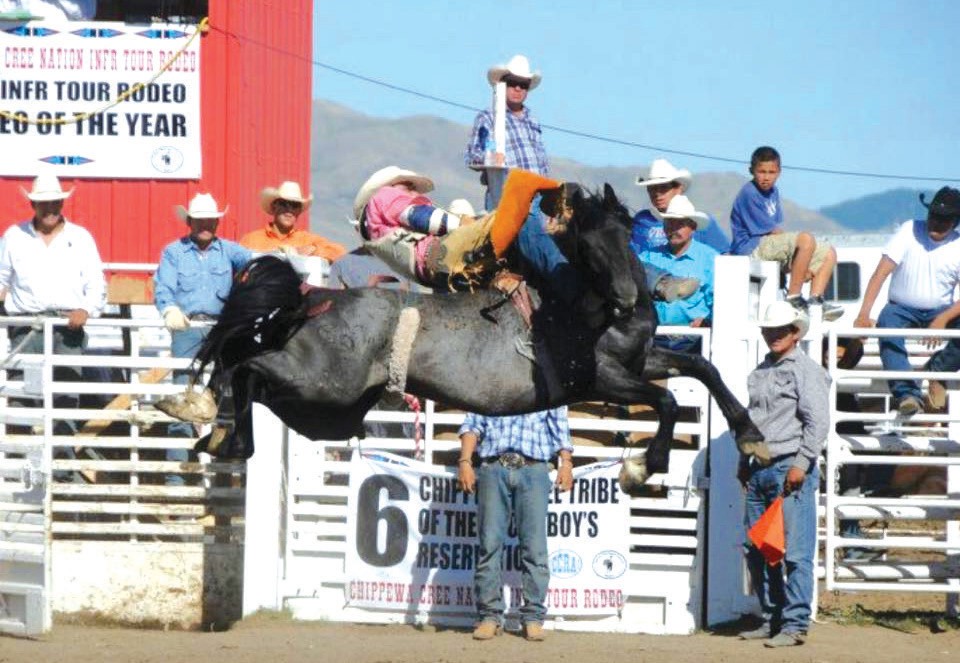 There were several more meetings to shape the organization. At one held in Pierre, S.D., LeBeaux was elected president of the Association for a particular reason.

From the meetings came the idea of creating another Indian rodeo association. “We were looking for another pathway to qualify contestants for the Indian National Finals Rodeo,” Le- Beaux said. He was the best person to pursue this with his professional rodeo background and networks.

Looking back, the new board may have underestimated the task. There were other rodeo organizations in the northern Great Plains competing for the same contestants, sponsorships and purses.

Already in place was the Northwest Ranch Cowboys Association (NRCA) and the South Dakota Rodeo Association (SDRA), started back in the late 1940s and 1950s.

The Great Plains Indian Rodeo Association (GPIRA) grew out from the All- American Indian Activities Association (AAIAA). The latter organization was started in the mid-1960s to promote intertribal competition with championship titles and prize money.

When the Indian National Finals Rodeo (INFR) opened its first go-round in 1976, there were 13 qualifying associations including the GPIRA. The Sioux Nation Association emerged at a time when some believed the GPIRA needed leadership change.

There were other Tribal rodeo groups in the region had similar thoughts about the INFR. In the late 1970s, the Oglala Sioux Indian Rodeo Association (OSIRA) and Standing Rock Rodeo Association (SRRA) were formed, competing for the same contestants, sponsorships, and purses.

But the enthusiasm and commitment of the fledging rodeo organizers did not wane. The first Sioux Nation Rodeo Association Finals was held September 18-19, 1981 at the Fort Pierre rodeo grounds.

When the dust settled, it was apparent that creating another rodeo association was not the answer to the original goal of honoring Native Americans in a hall of fame. There would be no more go-rounds for a Sioux Nation Rodeo Finals.

In 1982, LeBeaux, Lafferty and others refocused on selecting inductees for the proposed Sioux Nation Hall of Fame. The documentation of worthy candidates came in the form of written stories published in the Sioux Nation Cowboy News.

The accuracy of “cowboy storytelling” was recognized as an important element of the nomination process. LeBeaux credited western historians Dave Strain and Jim Aplan with sorting the oral histories. “They really helped us identifying Native people worthy of recognition.”

The Sioux Nation Cowboy News brought greater awareness to the Native American presence in the western cowboy culture of the state.

LeBeaux knew there are many more people who deserve to be honored. “If we didn’t get them in the paper, that’s because they are still locked up as oral stories with their families and relatives,” he said. “Somehow we need to find a way to continue the search and bring light to these stories.”

Just as quickly as it was started, the printing press for the Sioux Nation Cowboy Hall of Fame shut down.

“We just got burnt out at the end,” said LeBeaux with his cowboy drawl. “We had no board or hired staff to help keep moving things along.”

Funding was the biggest challenge. “Everyone was fired up in the beginning. But that didn’t bring in the money we hoped to get,” he said. “We did the best we could.”

When asked about what was accomplished, Le- Beaux said “I hope we showed the world that we had great Native American cowboys, ranchers and rodeo contestants in history.”

“You know, our Native People are very humble about their lives and what they did, but they deserve to be recognized.”

The same can be said for the two cowboys who started and ended a “sunfishing” ride of the Sioux Nation Cowboy Hall of Fame. They hung in there through the final go-round with championship attitudes.

Somehow, somewhere, these cowboys need to be honored.

(Phil Baird is the cofounder and past longtime president of the N.D. Cowboy Hall of Fame. He was a past vice president of the GPIRA and NDRA, and currently serves as the Provost/COO of Sinte Gleska University).