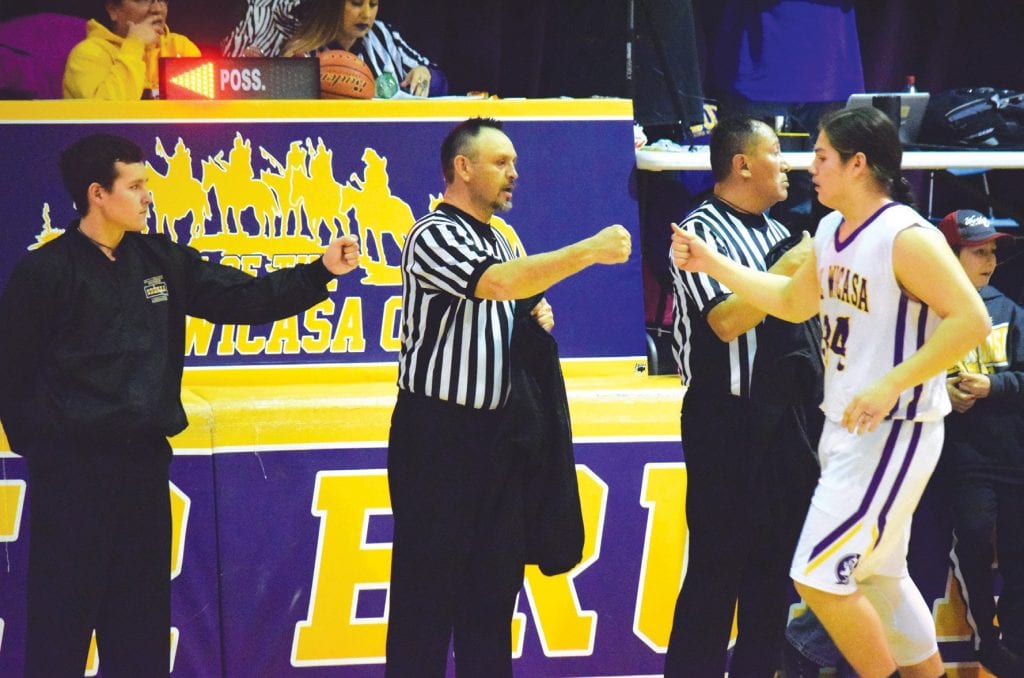 LOWER BRULE — It is a day into Christmas vacation, and a school bus idles in the frigid cold in the Philip High School parking lot. Two hours east on Interstate 90, on the banks of the Missouri River, the doors of Lower Brule High School, the home of the Kul Wicasa, are being opened, and later that afternoon there will be a basketball doubleheader, Girls and Boys varsity, between Philip and Lower Brule.

A hundred miles to the north, Scott Landreaux and Jeff Turning Heart are driving down from Cheyenne River. They are experienced basketball officials, and tonight, the third member of their crew will be refereeing his first varsity basketball game. Nineteen year-old Justice Morrison will drive up from White River. A freshman at Dakota Wesleyan in Mitchell, attending on a double golf/basketball scholarship, Morrison is back home in White River for the holidays. 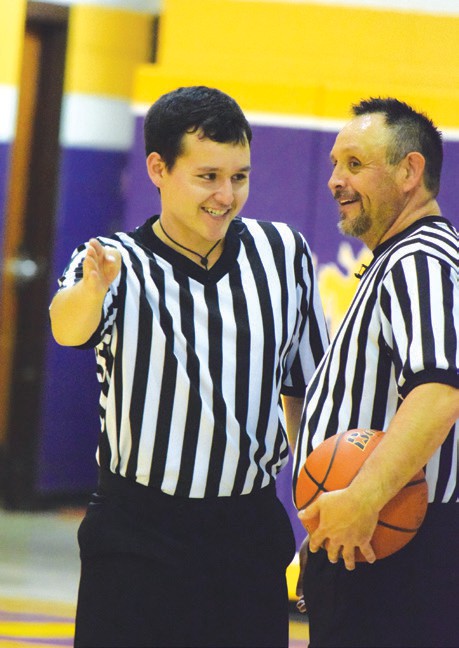 When these three official meet up in Lower Brule to work the doubleheader, they will be an all- Lakota crew, which obviously is fine with the Kul Wicasa, but Philip anticipates no bias from these officials, even though they have no Lakota on either basketball team. 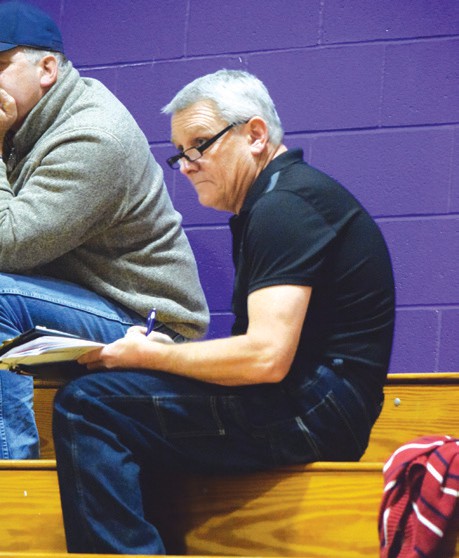 There is a talented little Eighth Grade guard on the Scotties, all five-foot-four of him, Ethan Burnett, and he is the son of David Burnett, a veteran high school basketball official from Philip, who will be in the stands watching both games. As far as Morrison knows, Burnett is there to support his alma mater, and cheer on son Ethan, and both of those things are true, but Burnett is also there doing his job. He may not be down on the court blowing his whistle, but he is evaluating how Morrison does his job, and Morrison does not know this. 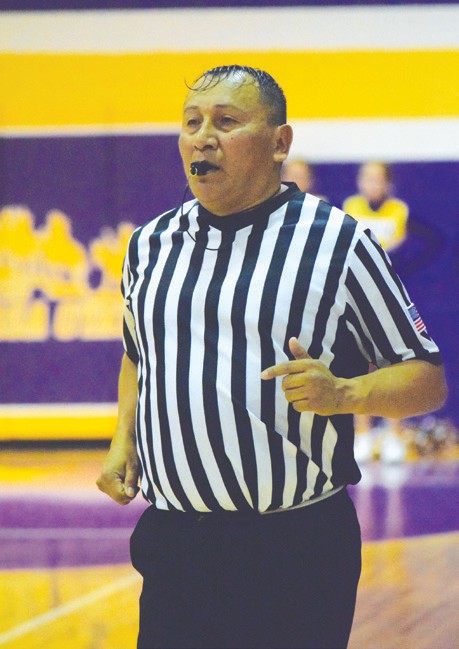 Morrison is obviously nervous, he has reffed junior varsity games, but his first officiating of a varsity game produces the same determination in him being a player did, to “not be bad.”

All his life Morrison has been driven to give a good account of himself, to “not be bad.” And this is his focus, to do his job, to call a good game. He realized from the beginning other players were better athletes: “I’m not fast, I don’t jump high, I’m not a great athlete.” But that is not exactly true. Morrison is not especially athletic, in the traditional way people define it, but he is and was a great athlete, who is the epitome of what his old coach Eldon Marshall drilled into his players: “good things come to those who work hard.”

Landreau and Turning Heart have spent decades officiating. One of the all-time great distance runners in state history, Turning Heart picked up a whistle for the first time in 1999, when he reffed a middle school game at Rocky Ford. His first varsity game was Pine Ridge v Standing Rock at LNI in 2001. According to Burnett, Turning Heart has developed his own signature style of calling a basketball game, because refs aren’t cookie cutter products, but they all want to arrive at the same result, getting the calls right, keeping the game under control.

“I went to an NBA game,” Turning Heart said. “I picked out one official and I followed all his movements and mechanics. When I got home, I went and practiced in front of the mirror, and this is how I developed.”

Each year Turning Heart takes a look at the upcoming schedule. He averages about eighty games a year, and networks with other officials to form three-man teams. Each school pays differently, but the officials must sign a contract, and Turning Heart says: “Once you get a contract, you are committed to that contract.”

Let’s say Turning Heart was officiating a Todd County doubleheader. He says he would get $90 a game and 37 cents a mile traveling expense: “I would get $180 for the doubleheader, plus mileage, so you’d be walking out of there with about $325.”

For a single game at an average school, driving an average distance, Turning Heart estimates he would make, “about $130.”

Turning Heart’s day job is resource officer at Tiospaye Topa, but he manages his officiating job separately: “I usually save my money for the next game, for fuel, for meals, for a babysitter.”

Burnett sits in the stands with a pad and pen, and while he talks about his son Ethan, he keeps a watchful eye on Morrison. Like most officials, Burnett has no negative experience with Morrison as a player, and Morrison simply calls Burnett “the best.”

There is a big difference between most Girls and Boys basketball games. The official must adjust to the different pace, the Boys game is much faster and physically explosive. Turning Heart has developed an internal dial he can adjust to whatever pace a game presents. He is always looking to maintain a certain standard of officiating, and he focuses on basic benchmarks to make sure he does.

Basketball can get emotional, tempers can flare, and the officials must be proactively responsive to this part of the game. When he sees it starting to escalate, Turning Heart says, “I try to visit with coaches and team captains, tell them you got to control the emotions. I also tell my officials, do not provoke anything to help it get out of control.”

Many times abuse comes an official’s way. Turning Heart has been called some racial epithets that need not be repeated here, and he receives what he calls “bully texts.” But although it stings internally, he “swallows his pride” and tries not to respond provocatively. He seldom calls a technical foul, and “I’ve never thrown a player out.”

The Lakota basketball official clearly sees there are two different basketball worlds, three actually, because the third world is where these two worlds collide or blend. The first world is wide open rez ball, and much of the basketball a Lakota official will call will be this basketball. The second is East River half-court basketball, and Turning Heart says officials who mostly call this game, have a tendency to over-officiate the fast break game. The third world is where these two styles of play clash on the floor, and the tough test for any official is to keep a balanced, educated, racially unbiased whistle which fairly assesses these diametric styles. At this, David Burnett, excels.

The most common officiating mistake, however is “ball watching.” Each official has a territory he is responsible for; the court has been divvied up to achieve maximum coverage. As a player, Morrison was a superior ball watcher: “That ball is what you want.” As an official he realizes he can revert to thinking like a player, and watching the ball and not his assigned area. Most officials are ex-players, often excellent ones, and they all wrestle with this tendency.

As far as the game went, the Lady Sioux had little trouble with a Lady Scotties team that had come in 4-1, but had not faced the competition 3-2 Lower Brule did at LNI. Philip lost 65- 51, and Burnett, explained they were just too “quick and athletic.” In the second game, things went bad from the get for the Scotties, and it was 16-4 five minutes in, and never got better. Little Ethan Burnett did a nice job of bringing the ball up court, and even drained a three.

A couple of slam dunks by 6-2 forward Jayshawn Milton highlighted the fact that the Kul Wicasa boys were also too quick and athletic for the Scotties. They prevailed, 70-52. Justice called a charge on a player and seemed to be getting the hang of it.

Turning Heart says they are “happy” with Morrison’s development: “He has the knowledge, he knows the game. Couple more games, he should know what’s going on.”

As far as Morrison goes, Burnett had a checklist of what he must work on, chief of which was to “stay with the play,” and “make sure I have closed down the center position on free throws.”

Most of the players on the floor played against Morrison last year, and he realizes this is what he must work on most: “Gotta make sure I am watching the defense, and not the ball.”