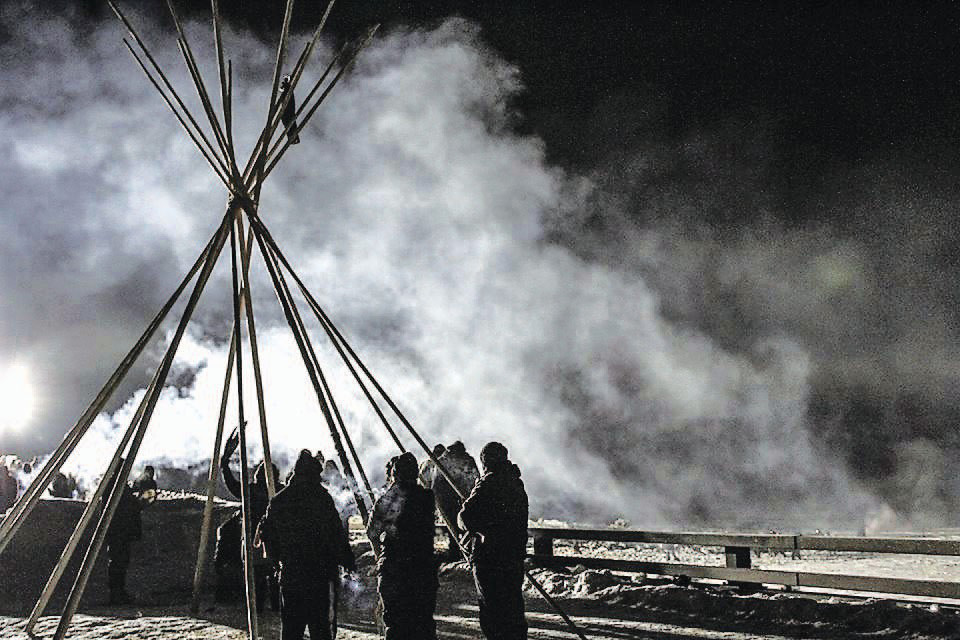 WASHINGTON –– The action was a cliff-hanger, but after Dakota Access Pipeline’s unsuccessful lastditch legal attempt to block an Environmental Impact Statement, or EIS, the Department of the Army gave official notice on Nov. 18 that it will bow to Standing Rock Sioux tribal government and public pressure to conduct one.

Anybody who wants to comment on the scope of the EIS process can submit remarks by Feb. 20 on the pipeline’s proposed Oahe Reservoir crossing of the Missouri River one-half mile upstream from Standing Rock’s main drinking water intake, the Army said in a Federal Register publication.

“This notice opens the public scoping phase and invites interested parties to identify potential issues, concerns, and reasonable alternatives that should be considered in an EIS,” it said.

The publication coincided with a federal judge’s denial of DAPL’s filing earlier in the week in the District of Columbia to block Inquiries into the project’s threat to cultural and natural resources.

U.S. District Court Judge James Boesberg turned down DAPL attorneys’ request for a Temporary Restraining Order, which sought to block publication in the Federal Register of the Notice of Intent for an Environmental Impact Statement.

The Standing Rock Sioux Tribe welcomed publication of the Notice of Intent, locking in the EIS process just two days before the end of U.S. President Barack Obama’s Administration.

From tribal headquarters in Ft. Yates, North Dakota, Standing Rock Sioux Tribal Chair Dave Archambault II responded, “We appreciate the time and effort it took to get us to this point — yet another small victory on the path to justice.

“We commend [U.S. Assistant Secretary of the Army] Jo Ellen Darcy for her leadership and decision to require the EIS, and are thankful to both our supporters and the many government workers who it took to bring us to this point today. This continues to be historic,” he said in a written statement.

Citing treaty and water rights, he noted, however, “While the EIS is exactly what we called for, the final product must be stronger and more broad in scope. Rightfully, it should include, at the very least, the territory of the entire Great Sioux Nation, and not just Lake Oahe and the northern boundary of the Standing Rock Sioux Tribe’s Reservation.”

If the venture receives Army approval, the pipeline could proceed to move oil from the Bakken Formation centered on the Ft. Berthold Indian Reservation across more than 200 surface water bodies in the unceded 1851 Ft. Laramie Treaty lands of North and South Dakota through Iowa to an Illinois transfer station.

Lead associate Energy Transfer Partners said it has “great respect for the concerns of the Standing Rock Sioux Tribe,” and it plans “to continue to work with their leaders to address those concerns.”

However, it said in a written statement, “Recently, their interests have been overtaken by politically-motivated, anti-fossil fuel protesters who are using this issue as a cover for their often violent and extremist efforts to cause disruption.

“Their actions deny private property rights and freedoms to the landowners who are near and adjacent to the Standing Rock Reservation and deny American citizens and businesses the energy they need to produce jobs and build a vital and healthy economy.

“The behavior by some of these extremist organizations is not only criminal but dangerous to themselves and others, and we join with law enforcement and others in asking them to obey the rule of law,” the Fortune 500 company said.

The statement referred to the thousands of grassroots supporters of the No DAPL campaign, calling themselves “water protectors”, who have carried out civil disobedience and taken shelter in prayer camps established near the proposed river crossing since April.

In the wake of the latest federal decisions favoring water protectors’ position, state law enforcement’s way of “asking them to obey the rule of law” became increasingly militarized with the deployment of an AN/TWQ-1 Avenger missile launcher to its arsenal overlooking the encampments.

On the night of Jan. 18 and the morning of Jan. 19, the Morton County Sheriff’s Department, in charge of the $22- million Emergency Operations Center created by former Gov. Jack Dalrymple to confront anti-DAPL expressions upped the total of water protectors arrested since Aug. 10 to 624.

Hundreds of dissidents had gathered for three nights in a row, setting up tipi poles at the police line blocking North Dakota Highway 1806 on the north side of the Backwater Bridge adjacent to the encampments, drawing fire from rubber bullets, drag stabilizer bean bag rounds, hand-deployed pepper spray canisters and smoke riot control chaser separating canisters.

“Our officers faced the same type of hostility and aggression that we have been subjected to for the past six months,” said Mandan Police Chief Jason Ziegler. He said, “Rioters once again violated their December agreement to stay off the Backwater Bridge as they set fires and assaulted officers using a variety of materials including ice chunks, rocks, and other home-made projectiles.”

Law enforcement cleared the bridge of protesters three times, resulting in 21 arrests for criminal trespass, engaging in a riot, disorderly conduct, preventing arrest on misdemeanor or infraction charges and remaining after requests to leave, according to the Morton County Sheriff’s Department. It said many of those arrested were transported to the jail in Stanton, North Dakota, located in adjacent Mercer County.

The North Dakota Bureau of Criminal Investigation is conducting an investigation.

Pavel Sulyandziga, chair of the U.N. Working Group on the Issue of Human Rights and Transnational Corporations and Other Business Enterprises, scheduled a day-long public hearing Jan. 23, to take testimony at the tribe’s Prairie Knights Casino Hotel on abuses in the standoff involving treaty lands.

At the same location on Jan. 22 at 1:30, American Civil Liberties Union Human Rights Director Jamil Dakwar offered a pubic presentation on “The Right to Peaceful Protest and Assembly, and the Long-Term Impacts of Police Use of Life- Threatening ‘Crowd Control Weapons’.”

The ACLU co-sponsored the two-day session with the International Indian Treaty Council. They received support from the Libra Foundation and the UN International Working Group on Indigenous Affairs.

The most recent spate of arrests came on the heels of peaceful disobedience activities at four fossil-fuel pipeline construction projects, organized in observance of the Martin Luther King holiday on Jan. 16.

At Standing Rock, hundreds of water protectors led a prayer walk to a razor-wire barricade approximately 700 feet from the drill pad where the Dakota Access Pipeline would cross the Missouri River.

According to the Sacred Stone Camp, law enforcement fired tear gas, pepper spray, and rubber bullets at point blank range, hitting one person directly in the eye, arresting 14, and holding some of them in cold dog kennels overnight.

“We came together to honor Martin Luther King, a man who stood up for injustice. We came to stand in prayer, and we were attacked,” said camp founder Ladonna Brave Bull Allard.

Osage and Muskogee tribe youth leaders took part a nonviolent blockade in which seven water protectors locked their arms to barrels of cement at the entrance to the Valero Refinery in Memphis, Tennessee.

The demonstration to stop the 440-mile Diamond Pipeline, being built from Cushing, Oklahoma across 500 waterways, led to 12 arrests for criminal trespass, blocking of a highway overpass, and disorderly conduct.

“In the words of Dr. Martin Luther King Jr., ‘It is no longer a choice between violence and nonviolence in this world; it’s nonviolence or nonexistence,’… and that’s all this whole thing is about,” said Eryn Wise of the International Indigenous Youth Council.

“As protectors, we have risen against all odds, to protect the water and the future of our children,” Wise said. “Though we may be wounded and weary, we stand because we cannot look at the future of America, in the light our nation’s impending Administration, and see anyone else that will stand for indigenous peoples and our rights.”

In Texas, an indigenous water protector and an Alpine resident locked themselves to pipe-laying equipment of the Trans-Pecos pipeline, another Energy Transfer Partners project. The Two Rivers Camp and Society of Native Nations have set up camps to prevent the project from carrying fracked gas from Texas into Mexico.

In Florida, several hundred people occupied a construction road near the Suwannee River to thwart the completion of the Sabal Trail Pipeline. Eight were arrested as two locked themselves to a truck carrying equipment to the site where workers are currently drilling under the river.

They argue that the 515- mile natural gas pipeline project being built from Alabama through Georgia to Florida threatens the Floridan Aquifer, one of the largest underground freshwater tables in the world.

With North Dakota’s new Gov. Doug Burgum declaring that DAPL’s cancellation “would send a chilling signal to those in any industry who wish to invest in our state and play by the rules,” lawmakers are introducing bills to sue the federal government for law enforcement costs, to protect drivers from liability for injuring or killing a pedestrian obstructing traffic on a public road, and restrict the use of face masks.

“Unarmed citizens exercising their right to free speech are hit with tear gas and rubber bullets for opposing a fossil fuel pipeline,” she said, adding, “The people’s revolution continues – this is our planet and our children’s futures at stake.”

Honor the Earth, on Jan. 16, announced a March 3 deadline for entries in an indigenous visual arts contest for its 4-year-old traveling exhibition that helps raise funds and depict extractive industries’ impact on communities.

Written comments on the EIS scope may be submitted via email to Mr. Gib Owen at gib.a.owen.civ@mail.mil. Use “NOI Comments, Dakota Access Pipeline Crossing” as the subject of the email. Postal service or hand delivery by advance arrangement may be addressed to Mr. Gib Owen, Office of the Assistant Secretary of the Army for Civil Works, 108 Army Pentagon, Washington, DC 20310-0108. Include submitter’s name, return address, and “NOI Comments, Dakota Access Pipeline Crossing” on the first page.