Barking Water: A tale of love, forgiveness and humanity 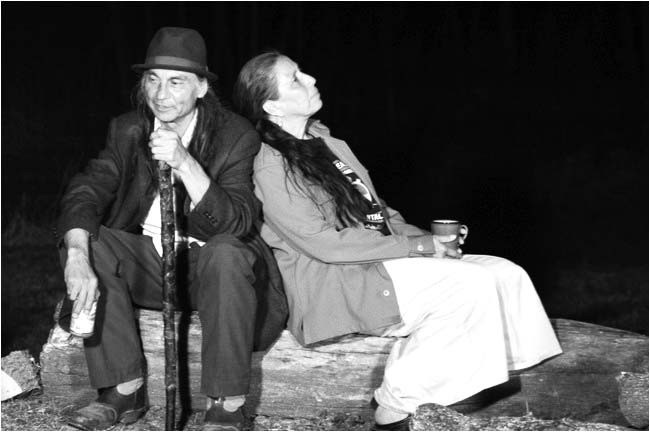 Richard Ray Whitman and Casey Camp-Horinek as a couple on a final journey in “Barking Water.”

TALEQUAH, Okla. ––The film Barking Water starring Casey Camp-Horinek (Ponca) and Richard Ray Whitman (Yuchi/Creek), is a tale of love, forgiveness, and humanity in all its frailty and strength. Written and Directed by Sterlin Harjo (Seminole Creek) and Chad Burris (Chickasaw), this film is a story about the end of life journey of an aging Native American man, Frankie, played by Whitman, and his estranged wife, Irene, played by Camp-Horinek, and their trek through their home state of Oklahoma, visiting relatives along the way, and finally going home.

Barking water is about honoring death as part of the circle of life, of respecting the end of life and of honoring relatives. It spins a yarn about the journey of an aging couple and a man’s last reconnection to family and place. A sensitive storyteller, Harjo had recently experienced the death of his own grandmother and wanted to relate that experience through the occurrences and emotions encountered by an older couple.

Irene and Frankie had been in a 40-year-long, but very rocky, relationship. Upon hearing of Frankie’s fatal illness, Irene breaks him out of the hospital where he had been sent to die. They take the long way home, over the Oklahoma plains, tolerating the insensitivities of some family members and soaking up the warmth of others until finally arriving back to the old home place. The journey in between is one of comedy, drama, and adventure, with the ever-present feather hanging from the rearview mirror.

It is a story about the interwoven strands in the lives of a modern Native American family, told by Native Americans. At the film premier, several members of the cast and others were interviewed. Richard Whitman discussed with Nick Ortiz, his thoughts about a documentary, in which he had acted, about the 1973 incidents at wounded knee. The documentary included actual footage from that time. Whitman stated there were “no reenactments, the real event itself! It’s real important how we can bring our people into this century, you know. We seem to be preoccupied in the film industry with Indians from the past, past issues, past concerns, past culture; so, it’s very important, that we as Indian people, we bring our culture right to this moment.”

Carly Kohler interviewed Casey Camp-Horinek who stated, “I’m a member of the Ponca Nation from Oklahoma….; Its nice as a woman, a grandmother many times over, to play a lead part and to be in this century in the year 2009 and not be in another western where I get killed…(laughs). I’ve died in 13 different tribes so far, so it’s nice to stay alive.” When asked what message she would like to give young Native people, she stated, “I think it would be awesome if you followed the role models of people like Sterlin who is 29 years old and is following his dream and it’s difficult, it’s difficult. I believe in the traditional ways and in the early 1980s… I’m a long-time activist… the spirits were telling me ‘utilize the media.’ At the time, I thought it meant bigger protests, but I understand more that the United States of America as well as the global community will not begin to understand us until we tell our own stories. We don’t need all of the other non-Indians telling the native stories. We need you.”

Though Camp-Horinek was not in the film documentary about wounded knee, she stated, “but my brother Carter Camp was one of the leads in that.” She had some family members who had taken part in the actual 1973 occupation, but she, as an expectant mother with her 2nd child on the way, provided a home for the warriors to reside in Oklahoma. “I’ve always felt very proud of fulfilling the woman’s role in my life, so I washed dishes, I cooked dinners and I took care of children, and I provided a home for many AIM warriors, and I was a behind warrior myself in many of the instances,

When asked if it was hard to cry in the movie she stated, “Not at all. With age comes experience, so we’ve had many experiences in our lifetime that we can draw from as actors to be able to portray what we need to portray; and of course, Richard is a good friend of mine, a lifelong friend and brother, so it was easy (he did such an awesome job) to be able to feel the way that I would feel if something tragic like that happened.”

Jon Proudstar, when asked the same question, told Ortiz “You never anticipate that it’s gonna be beautiful and I thought it was beautiful… it was my first crying scene.” Proudstar said that because of the believability of the lead actors it was not hard to cry, “you really thought he [Frankie/Whitman was dying”.

The rural scenery and small town atmosphere permeating the film is enhanced by the cinematography of Frederick Schroeder and the realistic attire of the actors is accentuated by the attention to detain exemplified by Wardrobe Supervisor Spring Houghton. Also of note are Production Designer Greg Hulett, Editor David Michael Maurer, and Executive Producer Jack Clark. Interviews were made available by Jack Kohler. A memorable quote from the film is, “When he sees the horses, then he’ll know.” The film itself has been described as a love letter to the people and places of the director’s home state.

Sterlin Harjo is well-recognized as a film-maker by the media arts community. While working on his first featurelength film, Four Sheets to the Wind, in 2004 Harjo was chosen as one of the Sundance Institute’s Annenberg Film Fellows. The program provides fledgling filmmakers with hearty financial and creative assistance. In 2006, he became the first Native American recipient of a prestigious United States Artists’ Fellowship. In addition to two feature-length films, Harjo has completed three short films—all premiering at the Sundance Film Festival. He has future plans for nonfictional documentaries.

Chad Burris produced the award-winning Goodnight Irene, written and directed by Sterlin Harjo, which screened at the Sundance Film Festival, Berlin, Tribeca, Los Angeles Film Festival, Aspen Short Fest and many others and Four Sheets to the Wind by Harjo. Burris was awarded Sundance Institute’s Mark Silverman Award in 2007 for his independent film projects and is in the process of developing three feature-length films. Burris, a graduate of the University of Tulsa Law School, received a J.D. emphasizing Indian Law. During this time, he worked toward developing federal economic development incentives that would attract film production to and within lower income areas of Oklahoma and other states.

Access to the full film version of Barking Water, released on Saturday January 17, 2009, is royalty-free to members and subscribers of NETA, the National Educational Telecommunications Association.