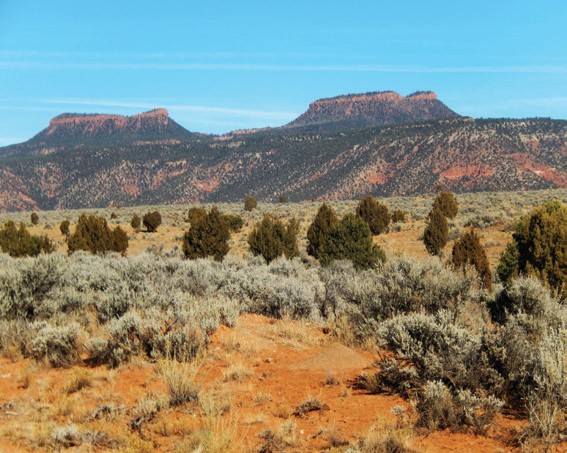 The central feature of the monument is so distinct that in each of the native languages of the area it’s called Bears Ears.

With the strokes of a pen, Trump opened large swaths of indigenous ancestral territory in Bears Ears National Monument and Grand Staircase-Escalante National Monument to mining, ranching, and motorized travel. 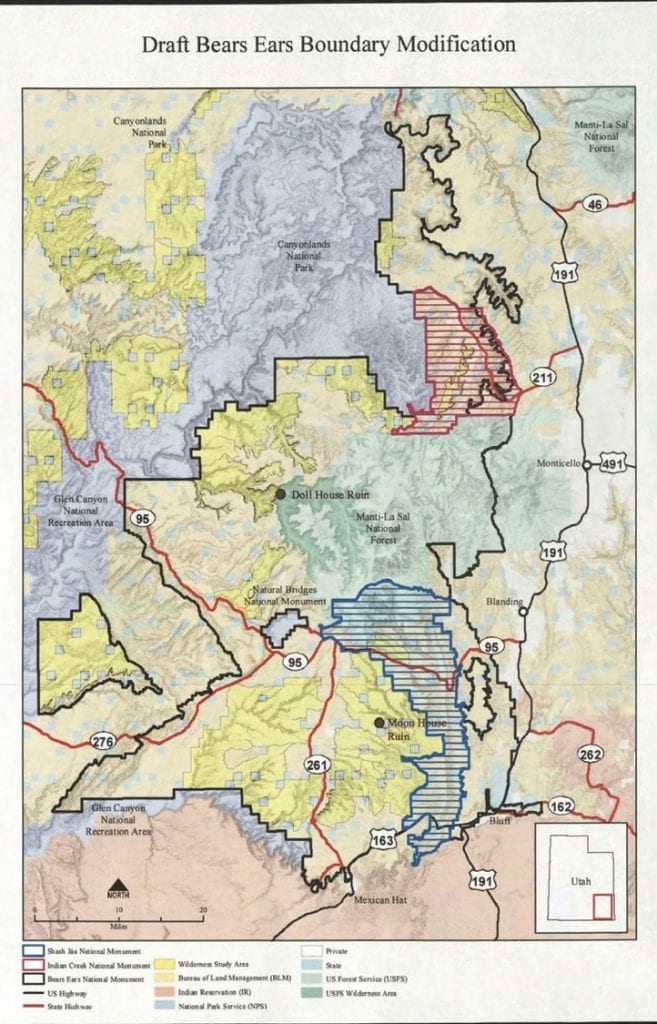 A draft map of the Bears Ears original national monument area shows its border in black; two separate units remaining after proclamation to reduce protection are shown in red and blue.

However, the action initiated on Dec. 4 has stirred up a virtual hornet’s nest of reaction, setting off lawsuits, legislative proposals and a U.N. condemnation that could eventually culminate in a very different outcome. 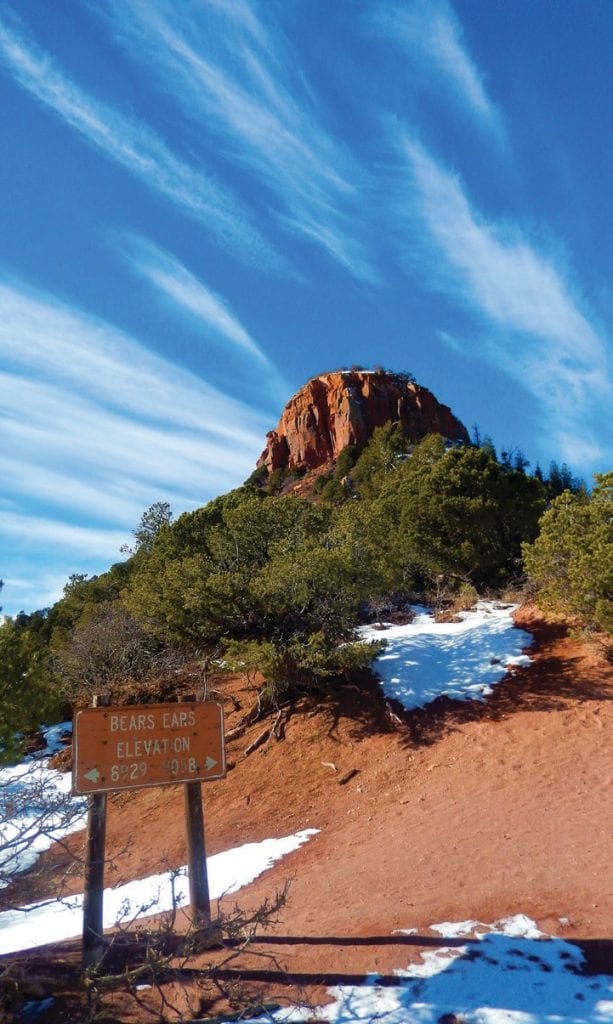 A view from the mountain pass on the gravel road to the Bears Ears twin summits shows one of the two buttes with valued natural and cultural resources.

In the proclamations, the President says that “it is in the public interest” to reduce the federal control of the lands “that I find are no longer necessary for the proper care and management of the objects to be protected within the monument.”

Such objects include everything from rock art covering 5,000 years of history to sacred stone spires representing Navajo warriors in the Valley of the Gods.

Ancient cliff dwellings, ceremonial sites, and countless artifacts within the 1.35 million-acre Bears Ears monument “provide an extraordinary archaeological and cultural record that is important to us all, but most notably the land is profoundly sacred to many Native American tribes, including the Ute Mountain Ute Tribe, Navajo Nation, Ute Indian Tribe of the Uintah Ouray, Hopi Nation, and Zuni Tribe,” former U.S. President Barack Obama said in establishing the protected status on Dec. 28, 2016.

So distinct is the central feature of the monument that in each of the native languages of the area its name — Hoon’Naqvut, Shash Jáa, Kwiyagatu Nukavachi, Ansh An Lashokdiwe – means “Bears Ears,” as the sign says on the gravel road to the summit pass.

“For hundreds of generations, native peoples lived in the surrounding deep sandstone canyons, desert mesas, and meadow mountaintops, which constitute one of the densest and most significant cultural landscapes in the United States,” states the original order for the Establishment of the Bears Ears National Monument.

Tribal members hunt, fish, cut and gather wood here, as well as collecting medicinal and ceremonial plants, edible seeds and herbs, and materials for crafting items like baskets and footwear.

“The traditional ecological knowledge amassed by the Native Americans whose ancestors inhabited this region, passed down from generation to generation, offers critical insight into the historic and scientific significance of the area. Such knowledge is, itself, a resource to be protected and used in understanding and managing this landscape sustainably for generations to come,” the order said.

The monument’s size is now reduced 85 percent to 201,876 acres in two geographically separated parcels, because some of the objects and examples identified in establishing the monument are not unique to it or not of significant scientific or historic interest, in Trump’s judgement.

With the same argument, he excluded 861,974 acres, or about half, of the Grand Staircase-Escalante National Monument, formerly consisting of 1.7 million.

The remapping excised monument protection on a portion of the historic Mormon Hole-in-the-Rock Trail, and artifacts left behind by pioneers of the 19th Century, as well as older Fremont and Ancestral Puebloan rock art panels, campsites and granaries.

An intergovernmental coalition comprised of Navajo, Hopi, Zuni, Ute Mountain Ute, and Uintah & Ouray Ute tribes urged Obama to instate the Bears Ears National Monument. They were part of a broad spectrum of conservation-oriented interests pushing the idea for at least two decades.

Noting that some 13 tribes trace their lineage to the Bears Ears area, they said, “Today, this landscape is open to all Americans, yet it is under the protection of only one full-time federal law enforcement officer.”

Unfortunately, added Jim Enote, director of the A:shiwi A:waan Museum and Heritage Center at Zuni, New Mexico, “Its ancient shrines, petroglyphs, plants, animals, minerals, and cultural artifacts have become a center of desecration, looting, and disrespect.” Documentation of the destruction is ample.

The coalition members’ dream was for joint tribal and U.S. government management in which “planning, authority, and decision-making are shared equally … “making Bears Ears National Monument a place where the wisdom of traditional stewardship is combined with the best of federal land management to ensure that the land and its heritage resources are well cared for, forever,” they said.

Obama’s language created a Bears Ears Commission for that purpose, with one tribally elected officer from each of the coalition tribes.

But less than a full year after the monument’s creation, before boundary markers were even posted to designate it, their hopes were dashed.

The proclamation for a whittled-down monument renamed the commission, confined tribal participation to decisions involving only one of the two units, and mandated a county commissioner serve on it.

The proclamations immediately drew lawsuits, not only from the Bears Ears Intertribal Coalition membership, but also from environmental organizations, history and science associations and corporate sponsors.

Patagonia outdoor stores called the unilateral directives “an illegal move” and “the largest elimination of protected land in American history.”

Victoria Tauli-Corpuz, U.N. special rapporteur on the rights of indigenous peoples, called the move “outrageous” and demanded the U.S. government “comply with its obligations to consult and cooperate in good faith with the indigenous peoples concerned through their own representative institutions in order to obtain their free, prior and informed consent before adopting and implementing legislative or administrative measures that affect them.”

It would relegate the Bears Ears Commission to consultant status and provide for Trump to appoint the members of monument management councils in which Native American representation would be significantly reduced.

Navajo Nation President Russell Begaye, noting that Shash Ja´a is the Diné term for Bears Ears, said the lawmaker used it to create the impression that the Navajo were in favor of the idea.

“HR 4532 also misleadingly states that its purpose is to ‘create the first tribally managed national monument,’” Begaye testified during the second hearing on the proposal, which took place at the House Natural Resources Committee on Jan. 30.

“In fact, the miniature monuments created by the bill would be managed by appointees of President Trump, made in consultation with the Utah congressional delegation, and would be composed of only a fraction of tribal members,” he said.

Shaun Chapoose, who spoke on behalf of the intertribal coalition at the first hearing of that committee on Jan. 9, said the appointed management council that Curtis envisions for Shash Ja’a is a classic divide-and-conquer weapon.

“This council is a return to the 1800s, where the U.S. government would divide tribes by cherry-picking tribal members it wanted to negotiate with,” he said. “It is up to the tribal government, not the United States, to select our own representatives.”

The National Parks Conservation Association encouraged the committee to “dismiss the bill swiftly, preventing further congressional action that would only serve to diminish the role of tribal leaders, limit the support of trusted federal land managers, leave the region vulnerable to destructive uses and much more.”

The bill would provide more protection from mining than the proclamation by withdrawing the original Bears Ears National Monument landscape from mineral entry.

However, the intertribal coalition favors yet another proposed law, HR 4518, pushback legislation that would extend, rather than reduce, monument protection.

It has attracted 112 co-sponsors, while HR 4532 only has three, all from the Utah state delegation.