KYLE—Little Wound had no trouble moving the football last Friday night, but their offense sputtered every time they got near pay dirt, and visiting Bennett County used a big play offense to prevail, 25-0.

After two years of playing road warrior, the Mustangs finally started a season on their new football field before a near capacity crowd. The grass was tall, the air was cool and misty, and the opening quarter gave no indication who had the better team. Both teams could move the ball, and both teams made big defensive stops. But with 1:02 left to play in the first quarter, Bennett County struck explosively. Quarterback Shawn Saxton fired a tight spiral that high-stepping Tee Allen took in over his shoulder thirty yards downfield. Every defender was yards behind Allen. He romped for a 71-yard touchdown. Brendan Kamerzell added the extra point, and the Warriors led, 7-0. That was all the points they would need. 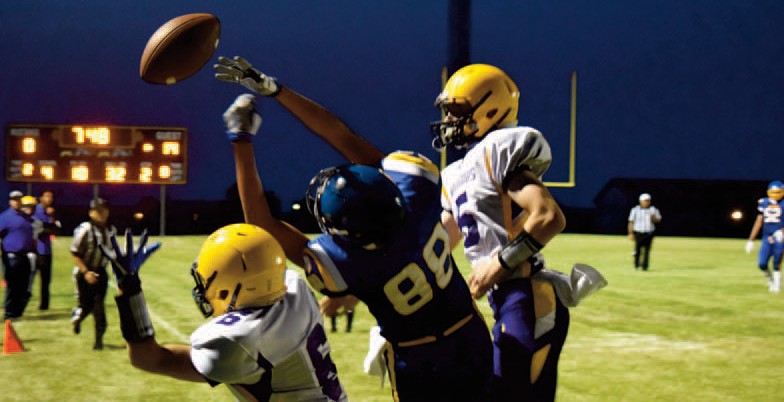 Allen is only a junior, but even as a sophomore he played like a senior. He led the team in passing yards with 105, and added 69 yards on the ground, averaging 6.3 yards a carry.

Little Wound got the ball back on their own 23-yard line. Seven plays later, quarterback Tyrone Pourier, was forced to the air on fourth-and- 18, from his 32-yard line. Little Jared Harris, a 5-5, 135-lbs sophomore, snagged that pass 15 yards downfield, and returned it 47 yards for a touchdown. Kamerzell added another extra point, and it was 14-0, Bennett County.

There would be no more scoring in the first half, despite Little Wound having repeated first-and-goals, the last one on the one-yard line. Something went wrong every time, the last one ending on a fourth-and-goal from the 19-yard line, when Pourier’s pass into a crowded end zone was batted down.

Little Wound opened the second half by working the ball to midfield, where a rash of penalties forced them to punt on fourth-and-26. Isaiah Johnson had a tough tackle-breaking punt return, an otherwise sure touchdown prevented by Shadow Red Owl’s tackle, giving Bennett County a first down on the Little Wound 42-yard line.

The Mustangs defense stiffened, stopping both Kamerzell and Allen for minimal yardage, so on third-and- nine, Saxton took to the air, connecting with Allen, which resulted in a first-and-goal at the 6- yard line. Two plays later Allen took it in from the four. Daniel Winsand ran the ball in for the two-point conversion, and Bennet County was on top 22-0.

Last year, Bennett County beat Little Wound 34-8, and Little Wound just wanted to get that goose egg off the scoreboard, and so Mustang Head Coach Jacey Mesteth had Pourier and Red Owl switch positions. On fourth-and-six from the Bennett County 44-yard line, Red Owl hooked up with Pourier along the sideline, and Pourier broke through a wave of tacklers before being brought down on the eight yard-line.

On the next play Red Owl fired a pass to Harris at the one-yard line, except Harris plays for Bennett County, and he returned the interception out to the 23-yard line.

This drive eventually resulted in a 29-yard field goal by Kamerzell, making it 25-0, Bennett County.

Kamerzell is now a 5-9, 215-lbs senior, but he has been the bulldog backbone of this team for a couple of years, playing fullback, lineman and kicker. Even leg cramps could not keep him off the field, and he ran down the clock with a carry that shredded Little Wound’s inside tackling game.

Coach Mesteth put the game in perspective for his team: “That was a tough loss. We were in it the whole game, except for some minor setbacks. They were more disciplined, executed better than us. We had some exciting plays, but we just couldn’t get it into the end zone.”

Offensively, Little Wound put up numbers similar to Bennett County. But Pourier proved there is little he can’t do to help his team. He rushed for 51 yards, passed for 72 yards, and had two receptions for 40 yards. On defense, Pourier led the team with seven unassisted tackles and two tackle assists, and had one interception and a blocked kick.

“These kids play with heart,” Warrior Head Coach Tucker Risse said. “They go through the pain and the grind. The leadership is coming from kids with hearts who reach down to the underclassmen and pull them up beside them.”

Last week, Bennett County beat Custer, 16-14, and next week they host always tough Hot Springs, who will be looking to rebound from a loss to Tri-Valley. Little Wound will go on the road to Custer.