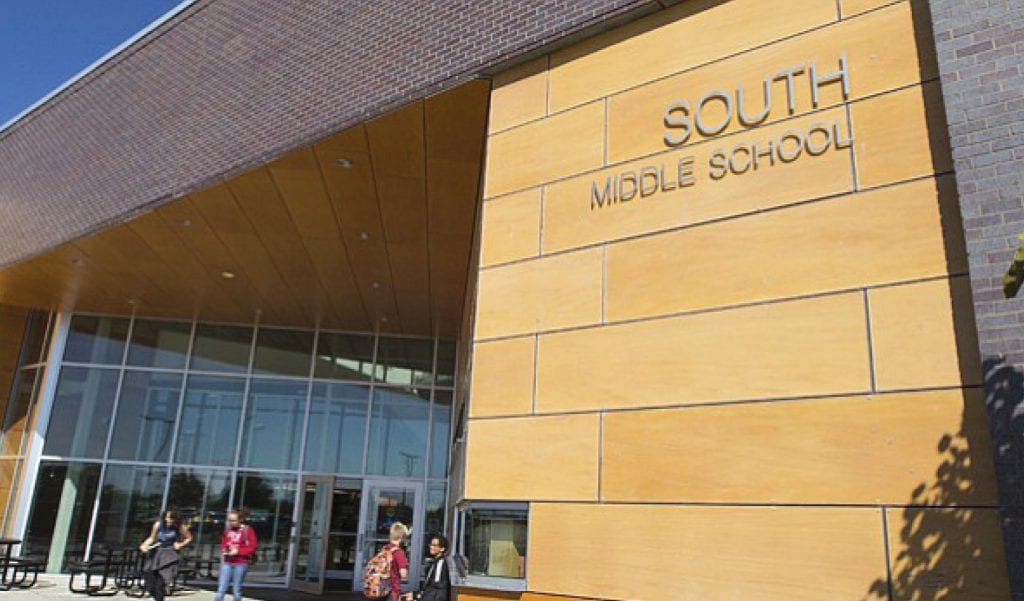 South Middle School students hang out on the patio outside the school after early release on Wednesday, Oct. 11, 2017. A topic currently being considered is the renaming of the school after a notable Native American figure with local roots.

LAWRENCE, KS — Parents and community members have until Friday to participate in an online survey intended to gauge support for a possible name change at South Middle School.

Although the results won’t likely be released until later this fall, the South mother who spearheaded the campaign earlier this year said she’s optimistic about her proposal’s chances.

Carole Cadue-Blackwood, a member of the Kickapoo tribe, has led efforts to rename the school in honor of Lawrence’s Native American heritage.

“I want it to be a place of inspiration for everybody,” she said, especially Native American students, who have posted graduation rates well below the national average for several years now.

“The No. 1 reason kids drop out is because they feel nobody cares,” Cadue-Blackwood said. “ … It just comes down to self-esteem.”

She wants the district’s Native American students — including her two daughters, one a current South student and the other a Lawrence High School student — to know their community cares.

South has historically boasted one of the highest populations of Native American students in the Lawrence district, and was built on land given to the city, county and school district by the Bureau of Indian Affairs through Haskell Indian Nations University, then known as the Haskell Institute.

According to information prepared by Dan Wildcat and Mike Stewart of the Haskell Environmental Research Studies Center, Haskell has seen nearly 700 acres of its campus donated to various government entities since the 1950s.

The campaign has generated several suggestions so far, mostly the names of Haskell alumni known for their athletic achievements.

“The name that keeps coming to the top is Billy Mills,” Cadue- Blackwood said of the celebrated Haskell alumnus, U.S. Marine veteran and 1964 Olympic gold medalist. “Any kid can look at that name and say, ‘Hey, that kid from Pine Ridge Reservation has made it — and I can, too.”

Cadue-Blackwood said the name change would allow South to keep its cougar mascot. She has also pledged that fundraising efforts would be undertaken to alleviate costs incurred by the potential renaming.

The results from the South community survey — as well as a separate survey for students — will be analyzed over the next week and shared at an upcoming school board meeting, South Principal Keith Jones said.

A link to the survey, along with a flyer about the proposed name change, can be accessed on the South Middle School homepage under “News and Daily Announcements.”