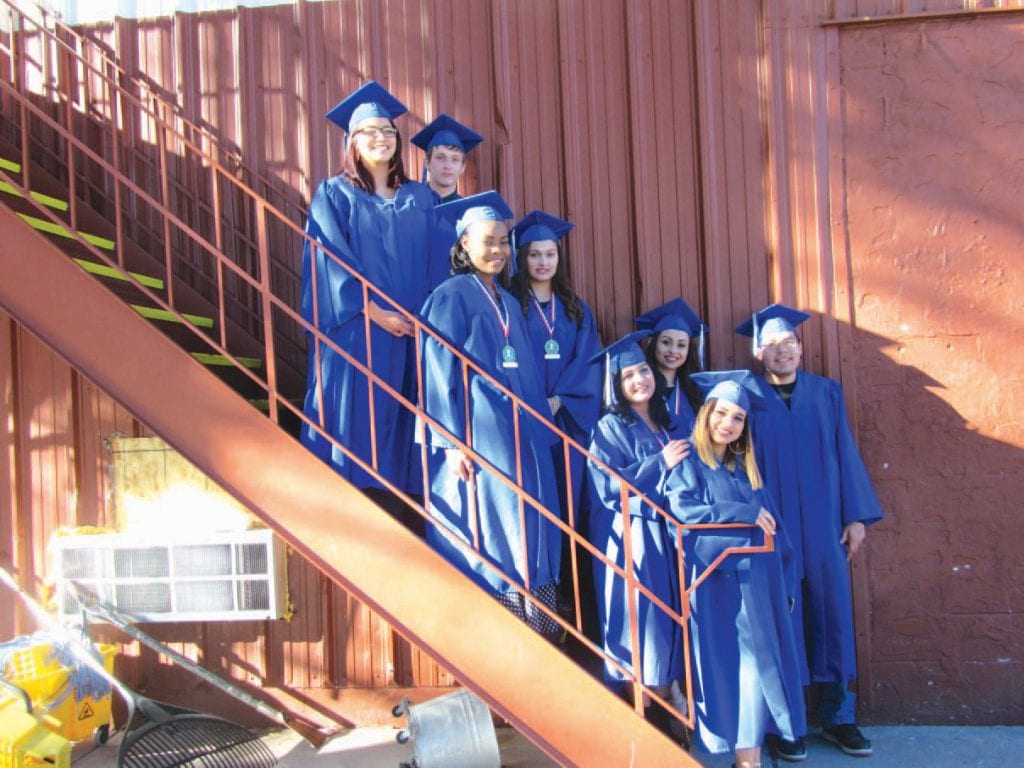 NEMO –– Boxelder Civilian Conservation Center (Job Corps) near Nemo, held a graduation ceremony February 17, 2017. A total of nine students walked across the stage receiving recognition of their hard work. Six with their high school diploma from the Lead/Deadwood Career and Technical Campus, co-located at the Boxelder Job Corps campus and one received their GED. All nine students completed their vocational studies resulting in certification through their chosen professional vocation.

Guest speaker, former student, Lieutenant Justin Nichols, was on hand to share his personal story and inspire the graduating class. Nichols attended Boxelder from 2001-2004. While attending Job Corps, he realized hard work and goals can lead to success, and “anyone can achieve success.” Once leaving Boxelder, he enlisted in the U.S. Air Force. While serving as an enlisted Airman, he attended college in the evening. After completion of his Bachelor degree, he then applied for officer training school and was accepted. Nichols still serves and has the honor of piloting B-1 bombers at Ellsworth Air Force Base.

Gordon Campbell, originally from Sisseton, was very goal driven while attending Boxelder, and completed all the educational requirements necessary to receive his GED, high school diploma, and Welding certification. Campbell’s focus in the future will be to continue his education at the United Tribes Technical College.

Tyler Eldridge, from Gillette, WY, came to Boxelder with his high school diploma already completed, but wanted to pursue studies in the vocation studies of carpentry. He focused on his vocational pursuits while here as well as participating in community service projects at both Deadwood’s recreation and senior centers. Eldridge is looking forwarding to finding employment within his vocation.

Warren Iron Heart, of Winner, completed his GED, and focused on the painting program as his chosen vocation. Iron Heart’s future plans include joining the Painters Union and finding employment. Iron Heart also played a role in the improvement project at the Deadwood recreation center.

Beverly Marroquin, from Sioux Falls, set her sights on earning a high school diploma and tackling the CNA program. After successful completion of the program at Boxelder,

Marroquin secured a position with Sanford Health’s Pulmonary Unit in Sioux Falls. In the fall, she intends to return to the classroom and pursue a cosmetology license.

Ana Montano-Cecilianne, from Sioux Falls, attained her high school diploma while attending Job Corps. Montano’s lifetime goal is to become a nurse so she pursued the CNA program and completed it, putting her closer to that goal. She will be enrolling with Southeast Tech in the fall to pursue her nursing career.

Sranita Pradhan, also from Sioux Falls, earned her high school diploma, while learning English as her second language as well. She too was enrolled and completed the CNA program and hopes to find employment in the Sioux Falls area. Pradhan’s future will include pursuing a nursing degree at Southeast Tech.

Mackenzie Roach, of Eagle Butte, previously earned her high school diploma before enrolling at Boxelder. Painting was the vocational pursuit she decided upon and completed the requirements of that program. While attending Job Corps, she volunteered for several community service projects, one being at the Canyon Lake Senior Citizen Home. In the fall, Roach intends to pursue her academic future at the United Tribes Technical College.

Pabitra Subedi, originally from Nepal, also learned English while pursuing her high school diploma at Boxelder. Her vocational pursuit was the CNA program, which she completed. Subedi intends to seek a position as a CNA and attend college in the fall.