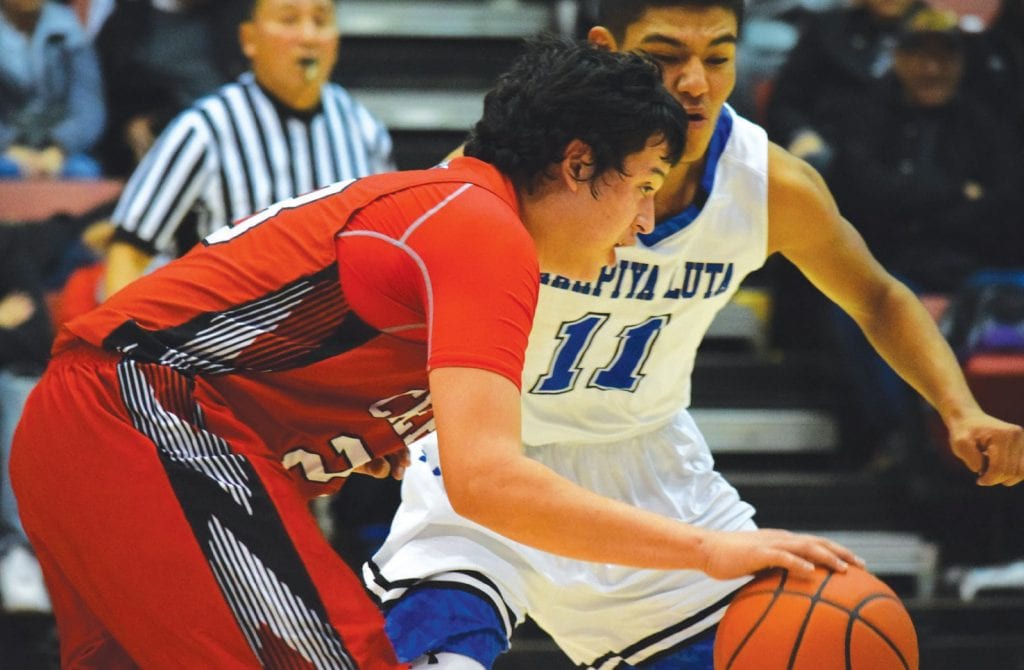 Joe Sazue III, 3-point specialist for Crow Creek, dribbles along the arc against Russell Leader Charge of Red Cloud at the 2016 LNI.

RAPID CITY — Two bedrock factors give the 2017 LNI a fresh face with intriguing possibilities. One, graduation has cut deep swaths across both the Girls and Boys draws, and two-time defending champion, Winnebago, won’t be back to defend their Boys title.

Recapping last year, Winnebago cruised past Red Cloud in the Boys final, 97-51, the only team giving them any trouble, surprisingly, was Tiospa Zina in the opening round. 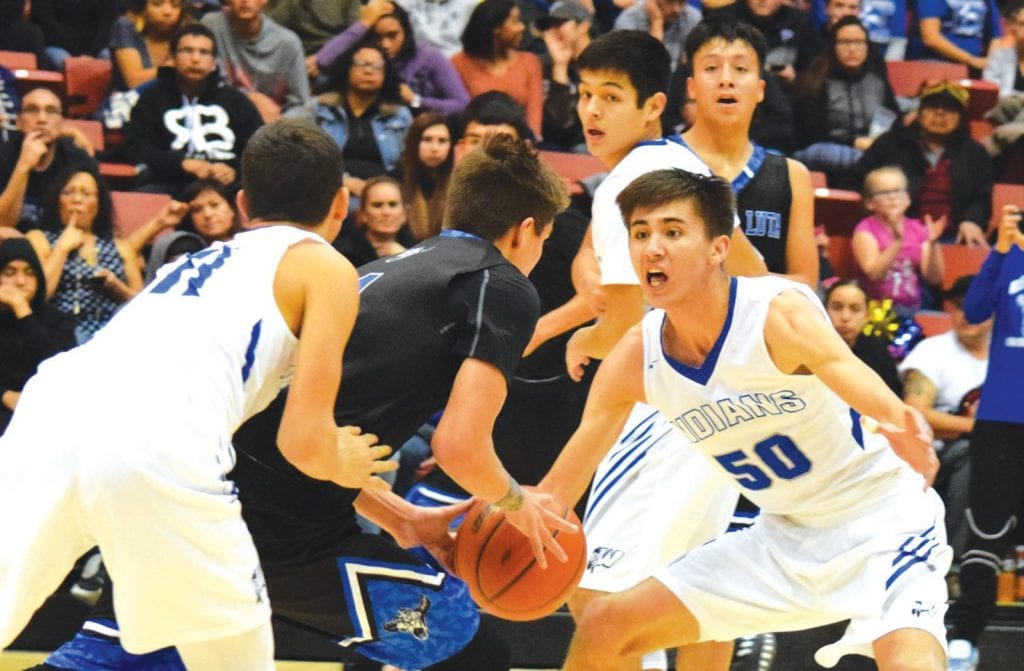 Let’s look at the match-ups, emphasizing the top four teams as we see them, starting with the 10 a.m. game on Wednesday, December 13, Barnett Arena.

The Crusaders made it to the final last year and ran into Winnebago. They finished the season 11-9, with a memorable win over crosstown rival Pine Ridge, on their floor. They lost inexplicably to Winner in the first play-off game, for the second year in a row. Red Cloud graduation losses are guard Will Garnier, forward Wak Forney, forward Jordan Shott, guard Joe Black Crow and big man, Mahpiya Briseno. Solid players, all, but the juniors and sophomores stepping up to replace them are just as solid, although Forney’s leadership will be missed.

Russell Leader Charge, 6-5 Manny Yellow Horse, 6-2 Garrett Richards, and 6-3 Louis Her Many Horses are the seniors on the team. Leader Charge is a stud, one of the top football running backs in the state, when not injured, possessed of blazing foot speed, and cat quick reflexes. Problem is, Leader Charge was out with a leg injury most of last season, and he was out during football season with an elbow injury, and never recovered his form or effectiveness. As a basketball player, he has the chops to be a team leader, but he is quiet, respectful, reserved, just what you would want to raise your boy to be, but the team needs him to be a leader and take charge, puns intended. He has no real weakness as a player, other than some defensive lapses and a tendency to miss midrange jumpers, but most of West River has those problems.

Yellow Horse has the length and aggression to make an impact in the paint. Always struggling for a big man presence, Coach Christian McGhee needs Yellow Horse to help establish that presence. Weaknesses are losing focus and aggression when he starts to get tired. Richards just needs to help replace players lost to graduation, and he has the drive and tools to do that. Sometimes a year makes a huge difference for a player, and hopefully Her Many Horses is one of those players. As a replacement for Forney or Shott, he has the goods.

Junior Ale Rama tops the list of underclassmen. He was an electrifying presence at quarterback, and he is that same type of field general in basketball. Couple years back he looked like a bookworm, but now he is an athletic 6-1, highly intelligent, and he can dribble, shoot and defend. If he stays healthy, and that is the if, he can supply the leadership the team needs.

Sophomore Riyen Carlow still looks like a baby, but he has grown into a 6-2 guard who has shown he can step up when he’s needed. Junior Jesse Jensen is a good kid who sometimes gets excited and gets a ref whistle for it. He is a jack-of-all trades contributor and any team is better off with him than without him. Junior Jevon Hacker brings stubborn grit and muscle to the team, and they need it. No player pushes him around. Junior Jalen Cross has some height, so his fresh legs would certainly help with the season long grind.

Red Cloud should beat Marty and make the final for a showdown with Pine Ridge.

Our pick to be LNI champ, Pine Ridge has a junior class second to none. They were not hurt by graduation. Returning seniors should be: 6-4 Tiger Leftwich, 6-4 Michael Janis, and 6-2 Greg Brewer. But they are not listed on the roster. Cecil Apple is listed, and he is a strong, steady performer that brings leadership.

The junior class is filled with the kind of talented “characters” that come along once every half century.

D.J. Vitalis is short and springy and bouncing off life like a pin ball. At 5-7, he is quick and extremely aggressive. Like Jensen for Red Cloud, he can get a bit involved where he shouldn’t. The team won’t lack energy with him suiting up. Halin Bad Bear is the backbone of this team. No player commands the floor the way he does. There is a surly, unpredictability about him which serves the team well. He is solidly built and a born basketball player, not just a good athlete. Juwon Garnier has 6-3 height he can make 6-5 height if pressed, so that is always good for a team inside. Joe O’Rourke is not on the roster, but is one of those players you never notice is on the floor until he makes a big play, cans a deep three. Don’t let him touch the ball if Pine Ridge is close, because he has the shot to beat you.

This brings us to Corey Brown. Even as a freshman he was a powerful force in the paint. He is easy to spot, because you never know what kind of wild hair-do he will be styling, and he is not shy about talking to you about his hair, either. He is also just one fine horse of an athlete; the kind of kid people find hard not to root for. He is listed at 6-2, but when he takes to that post, there is nobody going to get the better of him under that basket. Brown has a cleverness to his body and hands when close to the hoop few basketball players possess. You think you have him covered, you think your defense has him measured, and he twists his body, and reworks his hands, and next thing you know, he’s scored. If I am Coach Corey Shangreaux, I want Bad Bear to get that ball to Brown inside and let him work his magic.

Bottom line is, Shangreaux has a junior class that could carry his team to the state tournament. There are two problems that must be discussed: the Corn Palace and the Round of 16. In both cases, last year, but especially at the Corn Palace, Pine Ridge was clearly the better team, but just couldn’t stay focused in the late going. Not only did they not finish strong, the other team took away all the momentum and initiative, and the Thorpes just coasted to the end on competitive fumes.

Pine Ridge should beat Omaha Nation in the opening round. The game is at 11:30 a.m., Barnett Arena.

Eldon Marshall never has a bad team, or more accurately, his coaching, along with the able assistance of Jared Bouman, always makes it a good team. He knows his players; he has groomed them through a proven system that has sent the Tigers to the State B tournament over a dozen times in a row. Until Winnebago arrived, White River was the team to beat at LNI. They might be again.

What is missing from last year are Gunner Piper, Drew Espinosa and Camren Folkers, and especially, Justice Morrison, such a team leader, he was like a coach on the floor. How will Marshall replace those parts?

There are but two seniors on the Tigers, but they are good ones. John Petrik has slowly matured into a dependable player, inside or outside. Donnie Yackley must fill Morrison’s shoes as team leader and floor general, especially the leadership part. White River has talent, but they need a strong core of leadership personalities to create the team chemistry that can get them back to the LNI final.

Jadice Morrison has filled out a lot over the summer. He is a different type of player than his older brother, more athletic, more angular, but the 6-2 junior needs to help fill the big man void created by the loss of Folkers. Jacob Young is a 6-6 junior who is a lot like Folkers was two years ago, needing to get more aggressive and determined near the basket.

The Tigers have a fine sophomore class. Izaiah Sorace is short and strong and explosive, a fine athlete. Teron Sazue should complement Morrison well, 6-2 bookends to replace Folkers. Tyson Iyotte has matured into a pretty good 6-1 shooting guard. Joe Brandis has grown into a lanky 6-4 that can slam dunk if he gets a fast break.

That leaves Nick Sayler, at 6-0 he has the physical maturity of a grown man. He even had that as a freshman. He can get out on the court and fight hard in heavy traffic as well as anybody. It may be that the Tigers will never produce a single leader, like they had with Justice Morrison. Maybe they will all have to pitch in, and support each other as seven or eight co-captains. If they solve that problem, they are going to make a run at getting back their LNI title.

White River should have no problem with Standing Rock. Game starts at 1 p.m., Barnett Arena.

It was tough picking that fourth team. Lots of contenders. We went with Crow Creek based upon how they performed last year, and who they returned, and by the fact they opened this season with a 76-47 win over Little Wound. Head Coach Billy Joe Sazue doesn’t lack one thing—gutsy shooters. An unlikely looking hero, the foremost shooter is bushy headed 6-1 senior guard/ forward, Joe Sazue III.

Sazue can shoot the lights out from long range when he’s on. He said last summer, “I wasn’t a very good athlete, and I wanted to make the team, so I worked on my shooting.” He doesn’t look like an athlete. He isn’t fast, can’t jump high, but he is wrong about not being a good athlete. He is just a different type of good athlete. He is also a natural leader, easy to like, very communicative, and he has a fine supporting crew to make another surprise run at LNI.

There is solid senior leadership for the Chieftains: Demontai Medicine Crow, Jon Hall, Christian Clairmont, Devon Ratliff, and Josiah Blue Arm. The one sophomore on the team, Luke Wells II, is a 6-4 player who plays like a senior. This team has experience, depth, leadership. It doesn’t have a core of super talented players, but it could be greater than the sum of its parts, at least long enough to make the LNI final.

Crow Creek should have no problem with Crazy Horse. Game starts at 2:30 p.m., Barnett Arena.