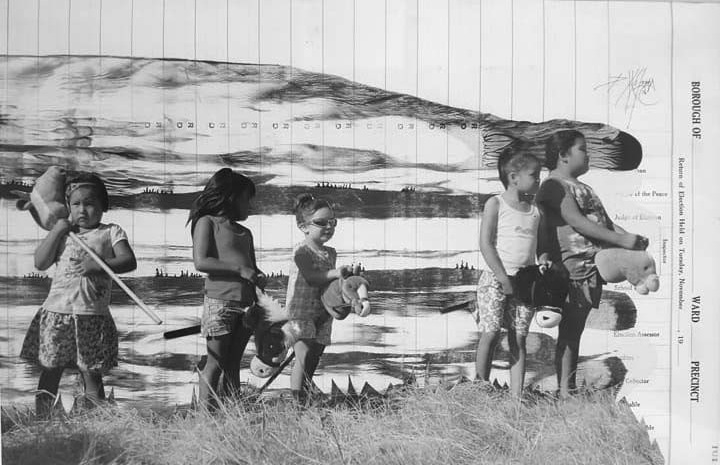 This piece by Dwayne Wilcox is among items on display at the Dahl Arts Center exhibit featuring Native American humor and comedy.

RAPID CITY –– Enjoy good stories, good food and good company on select Friday’s from noon to 1 p.m. Every Turtle Soup features a presentation on historic Black Hills figures and events and includes a featured soup from Angel’s Catering. Turtle Soup is included in regular museum admission or 1/2 off for Museum members. Lunch is served at noon; the presentation begins at 12:15 p.m.

Explore Boundaries Between Art and Science

RAPID CITY –– The Apex Gallery exhibit “Communicate, Innovate, Fabricate,” showcases the artistic side of South Dakota School Mines & Technology students and explores the boundaries between art and science. The exhibition includes original creative expressions like drawings, paintings, fabrications, sculpture and models by students from across campus.

This is the second year for the student exhibition, “Communicate, Innovate, Fabricate.” According to Deborah Mitchell, associate professor of humanities at Mines and the director of the Gallery, this exhibit shows that Mines students excel in creativity as well as engineering. “Art isn’t just about grand statements, rather it can make ideas visible and can help communicate the importance of the work done at Mines,” Mitchell says.

The exhibit is open to the public through March 17 in the Classroom Building on the SD Mines campus.

BLACK ELK PEAK –– At 9:30 a.m. Saturday, March 18, the Lakota, Dakota, Nakota people and their relatives will gather again at the Sacred Mountain of the People, Hehan Kaga Paha-Black Elk Peak in the Black Hills.

This is a ceremony to Welcome Back the Thunders and to prepare for the year ahead of us. The current generation is strongly encouraged to come!

Registration and refreshments will be at picnic grounds. Please bring warm layers of clothing and good walking shoes as the trail is icy. You are encouraged to bring offerings, prayers, and your school’s traditional staffs.

*All youth groups hiking must be accompanied by an adult chaperone. Please bring a roster of names of students and staff with contact numbers that can be left in camp while you climb.

This is a traditional ceremony so women on their time are asked to stay at camp.

A small meal will be provided after the hike.

KYLE –– Thomas Shortbull, Oglala Lakota College President, is pleased to announce that the South Dakota Tribal Colleges will host the 36th Annual Conference of the American Indian Higher Education Consortium (AIHEC) in Rapid City Saturday through Tuesday, March 18-21, at the Best Western Ramkota Hotel. The theme of the conference is “Revitalizing Native Spirituality Among Tribal Colleges.” OLC is the host sponsoring college with the help of the three South Dakota tribal colleges – Sitting Bull College, Sinte Gleska University and Sisseton Wahpeton Community College. Over 1,200 participants are expected to take part in this four-day event.

The conference is principally an event for tribal college students with numerous student related activities. The activities include academic competitions, and other student events, election of Mr. & Ms. AIHEC and the AIHEC Student Congress. The academic competitions include the Knowledge Bowl, Science Bowl, STEM Poster Presentations, Filmmaking, Business Bowl, Speech, One Act Play, Traditional Plants, STEM Oral Presentation, Critical Inquiry, Art, Chess and Web Page. The student competitions will take place at the Ramkota Hotel and the HeSapa College Center. Other competitions include Archery (Central States Fairgrounds), Volleyball (Mother Butler Gym), and Traditional Handgames. A total of 31 workshops will be held throughout the day on Monday and Tuesday. The AIHEC National Basketball Championships will be held in conjunction with the conference on March 15-19, 2017 at SDSM&T and Douglas High School in Rapid City with the championship awards on Sunday, March 19 at 6:30pm at the Ramkota Hotel.

A highlight of the conference is the Monday morning start of the General Session with the Parade of Flags and procession of students and staff from each of the 37 participating tribal colleges beginning at 8:00am. A spiritual ceremony will follow performed by Richard Moves Camp, Lakota spiritual leader. A special recognition of Newton Cummings and Wilmer Mesteth will take place following the ceremony. Monday activities include an evening Powwow at the Ramkota Hotel open to the general public.

The student awards banquet will close out of the 36th Annual Conference on Tuesday evening, March 21st at 6:00pm when winners of the student competitions will be announced at a banquet at which time they will receive their awards.

For more information on the conference competitions, workshops and events contact Jonnie Clifford, AIHEC Coordinator, at 605-455-6047 or jclifford@olc.edu.

RAPID CITY –– The Sioux Indian Museum, administered by the Indian Arts and Crafts Board, U.S. Department of the Interior, will feature an exhibit of artwork by Tammy Eagle Hunter. The exhibition will run from Jan. 20 to March 24, 2017. The exhibition is both free and open to the public.

RAPID CITY –– The Rapid City Arts Council is exhibiting A Comic Spirit, a selection of artwork from the Heritage Center’s Permanent Collection, opening on March 17 and on display until June 10. A reception will be held on Friday, March 17 from 5-7 p.m. The show will be in the Ruth Brennan Gallery at the Dahl Arts Center in downtown Rapid City.

Ashley Pourier, curator at The Heritage Center, has worked with the Rapid City Arts Council in selecting a group of artwork that deals with humor and comedy and the relationship of humor to healing and growth in Native American cultures. The exhibit is made up of 55 pieces including 2D and 3D artwork from 36 different artists and dating from the 1970s to 2016. The mediums used include oil paintings, watercolor, digital art, silkscreen, clay, wood, stone, mixed media, ink and colored pencil. This exhibit features work from numerous Native American tribes.

The Heritage Center (THC) began in 1969 as an art show demonstrating the talent and skills of Native American artists. As a result of purchasing award-winning artwork each year from that show, THC has grown it’s collection to include close to 10,000 pieces.

Special thanks to The Heritage Center at Red Cloud Indian School and guest curator, Ashley Pourier.

The Dahl Arts Center galleries are open Monday-Friday, 10am – 6pm and Saturday, 10am – 5pm. Admission is free; however, for those with the ability to pay, donations are encouraged and appreciated. For more information about upcoming exhibits, visit thedahl.org.

RAPID CITY –– The Rosebud Sioux Tribe Utility Commission has announced that on April 27-28, the Commission will be sponsoring the 3rd Annual Tribal Utility Gathering at the Ramkota Inn & Convention Center, Rapid City. The focus of this year’s Utility Gathering is “Securing the Energy Future for Tribal Homelands.”