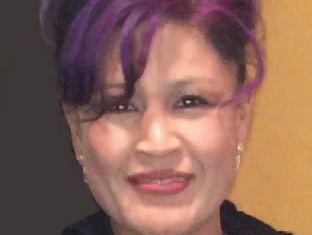 Our beautiful little Camilla Micaiah Blue Arm came to us in the spring of 1978 on June 9 in Eagle Butte. Camilla was the second of seven children born into the Norman Blue Arm and Ernestine Brown family.

In the fall of 1978 her family moved to Rapid City where Camilla would spend most of her childhood and teenage years. She attended Knollwood Elementary where she met her childhood friend Angie Cooper. She attended both North and South Junior High. In 1994 her mother moved back to Eagle Butte and she attended C-EB High School and worked as a cashier at Lakota Thrifty Mart.

At 15, Camilla’s natural beauty garnered her several modeling opportunities and a shot at a role in the movie Lakota Woman. In the summer of 1994 she traveled to model Native Fashions at the Sante Fe Indian Market where she met Gerald Garnenez, a Navajo from Shiprock, N.M. Camilla and Gerald were married in a traditional ceremony in Shiprock in the Spring of 1995 and shortly thereafter their son, Nataani Garnenez, was born.

In 2002 she attended Si Tanka Huron University in Huron and in 2003 she worked in the CRST Office of Planning and Economic Development. While living and working in Eagle Butte, Camilla provided a home for and helped raise her siblings: Tiba, Talo, Caleb, Tanille and Katurah.

In 2004 she met and later married Luta Martinez, and the couple moved to Winner. In 2005 Camilla returned to Eagle Butte and the CRST Office of Planning and Economic Development and became the office manager.

In the summer of 2007, we almost lost our beautiful Camilla after an accidental overdose of acetaminophen. Fortunately, she was life-flown to Mayo Clinic where she underwent a liver transplant. It was during this time she met and married Bernard Collins.

In the spring of 2014 she moved to Flandreau to be near her sisters, Chantelle and Tanille, and her nieces, Isabella and Scarlet. She worked as a hostess at Royal River Casino.

Camilla just wanted to be normal and did not want to be treated differently. She also wanted to be near her family. But our Camilla was special and we are grateful to Jehovah for allowing us to have her with us for an additional nine years. Unfortunately, her transplant started to fail and she was in the process of receiving another transplant at Avera McKennan Hospital in Sioux Falls.

But Camilla’s little body just couldn’t hold out and we lost her on December 12, at Avera McKennan in Sioux Falls. But our baby girl didn’t die alone as she was surrounded by her family: Tiba, Talo, Caleb, Chantelle, Tanille and Katurah, her mother, Ernestine and her father, Norman. She was also surrounded by her delightful and precious little nieces: Isabella, Andrea and Scarlet. Her sister Chantelle’s fiancé, Owen Wiese, and his mother and father, Dennis and Julie Wiese also provided support.

Just before Camilla left us, she was reunited with her beloved son, Nataani Garnenez, who is a senior at Kansas State University in Manhattan, Kan.and her precious Nacaiah “Azaria Goodstar” of Rapid City. Her sister Chantelle made three beautiful star quilts and Camilla was able to present one to her son and daughter and one we warmed her with.

We would like to thank the people who also loved our Camilla and shared her life: Gerald, Carrie and Poncho Garnenez, Quincy Goodstar and Grace Afraid of Lightning, P.J. Norvold, Rufus Charger, Luta Martinez and Carol Rave, Bernard Collins, Antonio Ibarrac, Rodney Jackson, David Ross, Harold Frazier, Joseph Brings Plenty, Deanna LeBeau, Carmen and Tammy Burgee, Angie Faye, Lisa Conklin, Tarita Silk, Karmen “Jessie” Little Wounded, as well as her many cousins, aunties and uncles, grandmas and grandpas. Special thanks to her Grandmas Mary Lee Johns and Marcy Miner and Grandpa Carlin Rave who helped us make it through this.

Luce Funeral Chapel of Eagle Butte has been entrusted with arrangements.(www.familyfuneralhome.net)