Carrying a cross from Kyle to Pine Ridge

An Oglala Christian realizes his vision 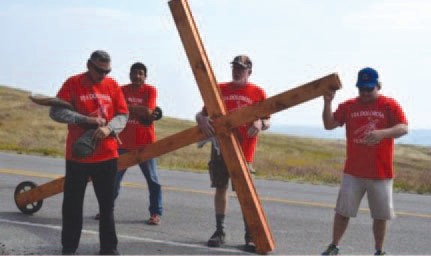 WOUNDED KNEE—Last May, George Dreamer, Jr., had a vision. Not the traditional Lakota vision, although Dreamer has much respect for and experience with any traditional spirituality connected to the Oglala people. The Lord spoke to me,” Dreamer said. “About carrying a cross across this reservation, from Kyle to Pine Ridge. I talked to Pastor Jackson, and we planned it all out. ”The cross is big, twice the height of a man, but there is a wheel built into the base, so it can be rolled along, draped over a person’s shoulder, as Christ himself carried it along the Via Dolorosa, “The Way of Suffering,” two thousand years ago. 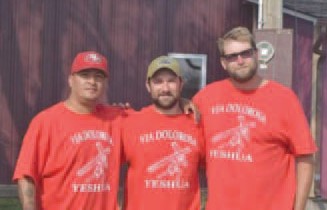 The walker’s don’t bother with a crown of thorns, but their feet suffer enough. During the first two days of walking, Dreamer wore blisters on his feet that tore open, leaving raw areas the size of coasters, but still he trudged on, until the sun set over the village of Wounded Knee. Churches along the way, of various denominations, gave the walkers a place to sleep, food to eat.The walk started early last week in Kyle with just three people, Dreamer, Pastor Jackson Helstad and Josh Lease. They headed west down the undulating blacktop to Sharp’s Corner. Dreamer said: “We had my dad behind us with a sign, he was waving traffic by…”“We would stop and pray at all the ‘Why Die?’ signs,” Dreamer said. “We would walk along and sing.”Gradually the numbers built, people would join the group, a few at a time, and most of them would be wearing the red t-shirt shared for this event. On the front there is Christ bearing up under the weight of the cross, and on the back is scripture, Mark 8:34: “If any man would come after me, let him deny himself, and take up his cross and follow me.”From far off people could see the cross, flanked by a dozen red t-shirts, a vehicle up front, and a vehicle bringing up the rear. The group would also stop before every house, and pray for the people living there, all the homes from Sharp’s Corner to the Highway 18 junction. This is beautiful, isolated country; pine covered ridgelines and tree-shrouded gullies, a hint of Carrying a cross from Kyle to Pine Ridge.

The badlands present in the eroding bluff edges. From a distance, the procession was a tiny speck on the patchwork blacktop, but you could feel their energy, passion and determination to make Christ visible to the people of the reservation they love.

“When we’re bringing the cross through here,” Dreamer said, “we are trying to let the people know God is real. I was into the traditional way of life. My Gramma and Grampa were pastors, so I know the Bible. I went to Sundance’s and sweats for a period there, but I gave my life back to Jesus after I got saved about a year ago.”

Dreamer is aware he will sometimes get a hostile reaction from his fellow Oglala, but that does not deter him: “One thing that is said a lot here, is we respect all faiths. It is a challenge to reach people. Most of my friends are traditional, they grew up with that way of life.”

Pastor Helstad ran head on into that challenge when he first came to Pine Ridge from Minnesota, four and a-half years ago. He had a discussion with a local Lakota pastor: “He basically said you people have been coming here for a hundred and fifty years, and nothing has changed. The Church is dying here. I was grieved. The response I had received on other reservations had been positive. What it showed me is there was a need for authentic Christians here. People that really loved Jesus, and loved others,” Helstad explained, “I had no plan or agenda when I came here.” But a single incident focused his mind on his mission and purpose. Cars were driving by a man passed out on the side of the road: “I pulled over with my family, and I kind of picked him up, stood him up. My heart was filled with compassion for this man because I used to be that way (drugs and alcohol), and he looked at me and he said do you love me? He said it a second time, and then he said it a third time—do you really love me? Can I have a hug? I just grabbed him and held onto him and he just began to weep. And the Holy Spirit spoke to me and told me this is the first time this man had ever felt the love of God in his life.”

Josh Lease came to Pine Ridge with Helstad: “God continues to put the Lakota people in my heart, create more of a love for the people. There was a men’s gathering in Oglala that happened in 2015, and at that time men prayed around me, and God confirmed this is where he wanted me to be.”

While these three men hold nothing back in their love for Jesus and their belief in their work on the reservation, talking to them is very relaxing and pressure free. No different than making small talk in the nearest coffee shop.

It is clear this walk has meant a lot to Dreamer, has forced him to walk his faith, to share it unreservedly with his fellow Oglala: “It’s been an awesome experience. That first day, that’s 16 miles we walked.”

That was also how far they had to yet walk to reach Pine Ridge, 16 miles; they would be walking into town from the east, as the Thorpes homecoming parade headed from Pine Ridge High School, west. In between, was the final stop where all the walkers would sit down for a meal at Billy Mills Hall.