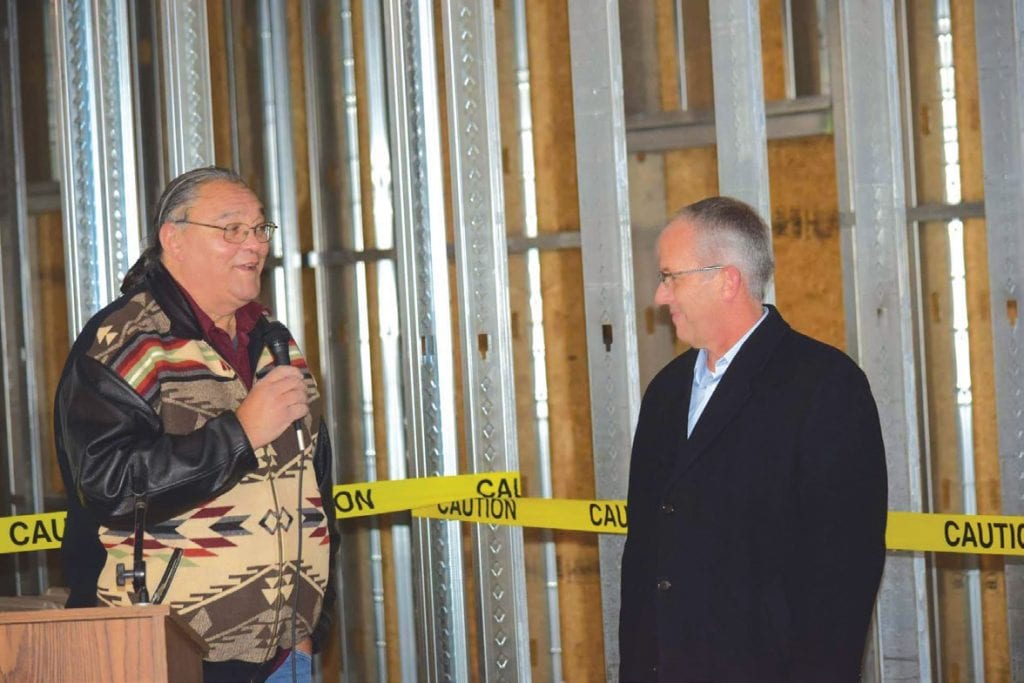 RAPID CITY — Frigid temperatures and a biting Arctic wind were not enough to keep the first shovel blade of dirt from being turned over at the groundbreaking ceremony for Rural American Initiative’s (RAI) new $6.9 million Head Start and community center last Monday afternoon.

For thirty years Bruce Long Fox, an enrolled member at Crow Creek, has headed up RAI, and has seen the organization grow to service over 1,200 at-risk Rapid City children and their families. RAI employs over 100 Native people and the new 28,000 foot square building, located at 2112 South Valley Drive in Rapid Valley, will consolidate all of RAI’s services into one modern facility, replacing a network of trailers and modular buildings spread across Rapid City.

Out on the construction site, Dicky Moves Camp arrived from Wanblee to bless the site in a traditional way, and then Long Fox said, “We’d like to form a circle and if you stand behind me, you’ll have the wind at your back.”

Long Fox is a large man, who can literally block a lot of frigid Arctic wind, with shoulders broad enough to have survived a rocky start in life at Crow Creek, and become such a force for civic good and social compassion he was recently awarded the Rapid City Chamber of Commerce’s most prestigious award, the George Award, awarded to an individual who takes initiative to improve the community and does not rely on “let George do it.”

RAI received a $2 million grant from Rapid City’s vision fund to assist in the realization of these improvements, and Mayor Steve Allender spoke at the post groundbreaking gathering, held next door in the partially completed new Indian Health Board facility, a project being handled by Scull Construction, a vital partner with both the Indian Health Board and RAI. Tables and refreshment were laid out, and much effort went into hospitality, but the cold wind was knifing fiercely into every available opening into the building, and there were many.

“I never guessed today there would be more than half-a-dozen people out there,” Allender said, speaking before a gathering of about a hundred people. “RIA does so much for Rapid City today. But nothing like they will do in the future with the new facility.”

Jim Scull of Scull Construction commented about the new RAI facility to be: “This is a wonderful, culturally sensitive building for these kids.”

Overall, the Rapid City Indian community will have two vital facilities, right beside the other, on an easy access road, with plenty of green space for landscape and gardens, and will no longer have to struggle with dilapidated, out-moded facilities spread across too large an area.

With the right leadership in place, Jerilyn Church with the Indian Health Board, and Long Fox with RAI, a consolidated location and close knit cooperation could usher in a new era of quality, comprehensive services for the Lakota families of West River and Rapid City.