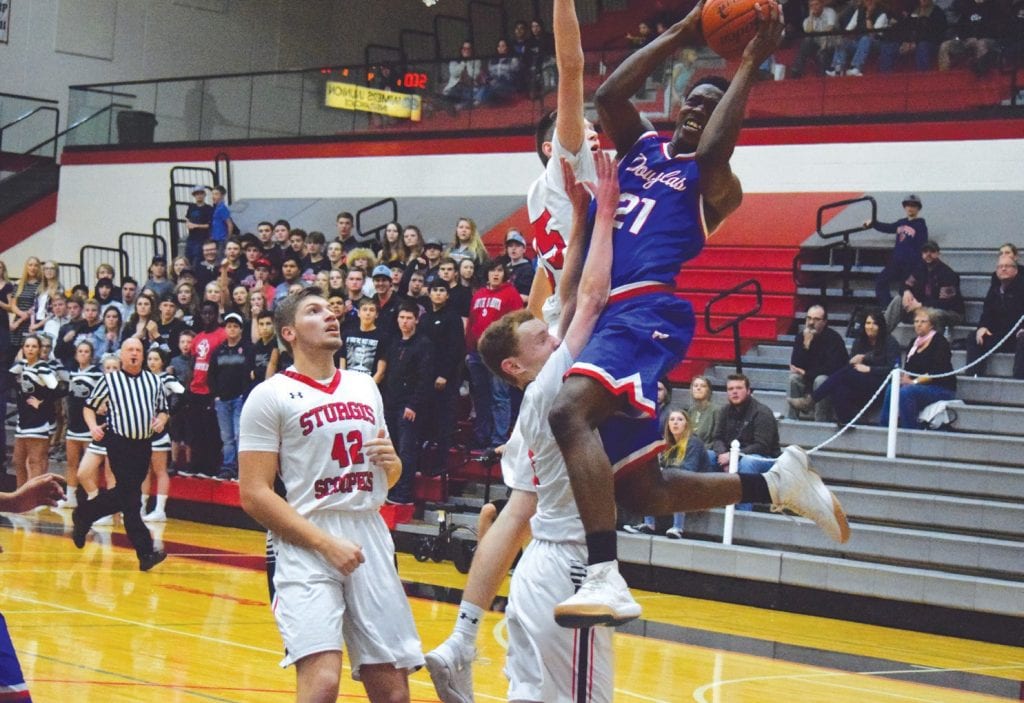 Darius Dawson of the Patriots soars over Ryan Garland and Jay Krull of Sturgis.

STURGIS — There is no doubt the prospects of a banner year loom large for the Douglas Patriots and their Black Hills rival, the Sturgis Scoopers.

The Patriots opened their season with an easy 76- 43 win over Alliance, Nebraska, a team that topped them by 14 points last year. They followed that up with a deeply satisfying win over St. Thomas More, a Class A team that has beaten them seven of the eight times Douglas Head Coach Travis Miller has played them, including twice last year. But graduation took a heavy toll on the 2017-18 Cavaliers, and they fell to Douglas, 76-56. 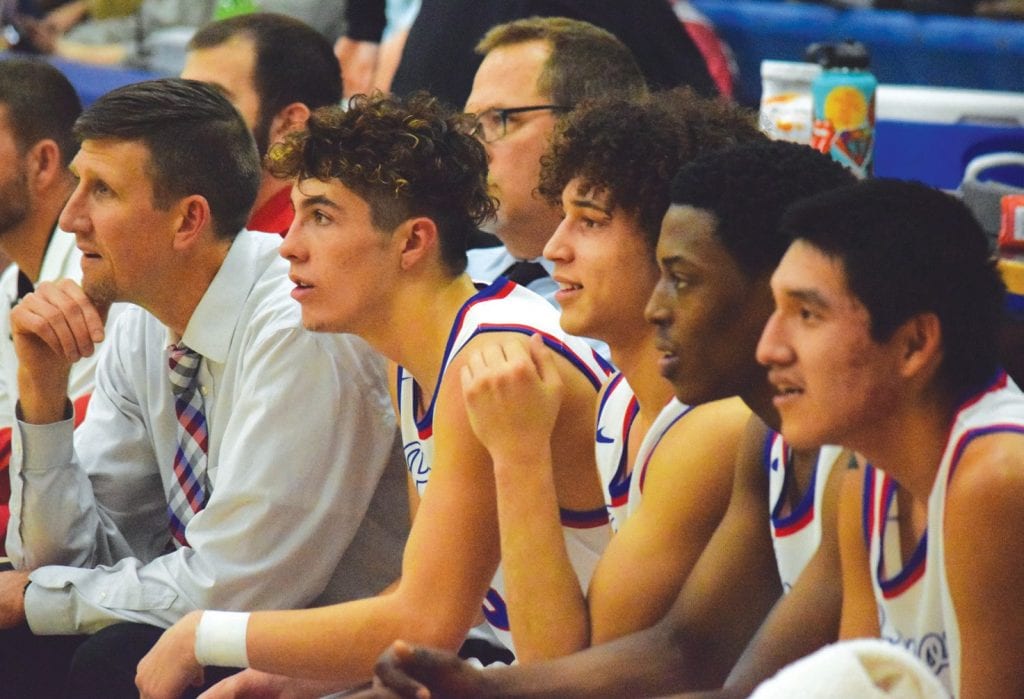 Sturgis opened their season with a routine win over Belle Fourche, 65-52. That brought up the Friday night match-up with Douglas.

Every game that this Douglas team plays, last year and this year, as they lost no players to graduation, is historic. The Patriots put more Lakota starters on the floor than any Class AA team in state history. Last year they shared that distinction with Rapid City Stevens, but this year Lakota basketball fans will just have Douglas. 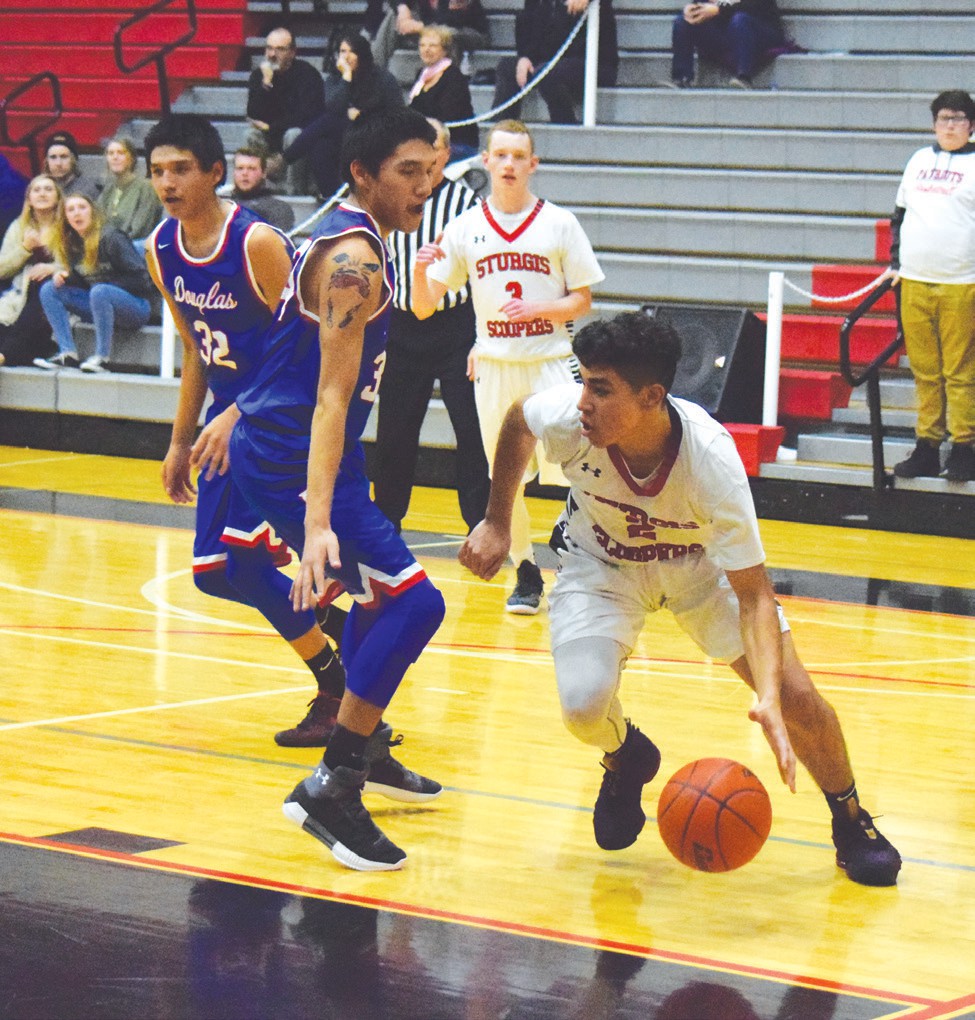 Cedrick Stabber of Sturgis drives the baseline against Sam Hand of Douglas.

The first of two regular season games between Douglas and Sturgis went as expected, with regulation play ending at 50-50. In the 4:00 minute overtime, 6-5 center Jay Krull opened with a bucket for the Scoopers, they took the lead 52- 50. Patriot point guard Russell Morton was fouled, and hit one free throw to make it 52-51.

The top player for Sturgis is Dawson Geuke, a highly efficient, technically superior guard who does nothing spectacular except shoot, defend, and bear down in the clutch. He went up the court and hit a three, Scoopers ahead, 55-51. There are two Hand brothers on the Patriots, Sam and Dan, and Sam Hand hit his own three, to make it 55-54, Sturgis.

Connor Crane is 6-5 and a power forward who can shoot threes. This time he drove the baseline for Sturgis and put them up, 57-54. At that point Miller called a timeout for Douglas, 2:08 remaining in overtime.

Back on the floor, Cedrick Stabber, a 6-0 guard who can sky, went up and snatched a rebound in heavy traffic, over players four inches taller than he is, and he fed the rebound to Geuke who was fouled by Morton. Geuke hit one free throw, making it 58-54, Sturgis. Scooper Head Coach Colin McCampbell called a time out, 1:26 remaining.

Once play resumed Sam Hand fouled Stabber, but Stabber could not convert the free throws, and so Dan Hand came down to the other basket and drained a three, 58-57, Sturgis. With 25.1 seconds left to play, Miller called another timeout.

Back on the floor, Crane was fouled and went to the line, he hit a free throw, and Morton had the ball and a wide open target to pass to up court. He threw the ball out of bounds. Douglas immediately called a timeout, 18.8 seconds to play.

“We realize what they can do,” McCampbell said after the win. “We knew it was gonna be a nip and tuck battle.”

The Scoopers don’t seem to get rattled when the game tightens up, and that certainly has helped them win three out of four against Douglas the past two seasons. McCampbell: “Our kids have been in a lot of close games, so they are comfortable in that situation.”

However, whenever Sturgis plays East River teams, that comfort zone tends to evaporate, and that is exactly what happened the next day after their big win over Douglas, they lost at home to Aberdeen Central, 40-38.

Responding to the controversial foul call near the end of regulation that forced the overtime against Sturgis, Miller said, “It doesn’t come down to one play, obviously, there are what… a hundred plays in a game? We had plenty of opportunities where we could have done some things. We know Geuke and Garland are good. Geuke puts in a lot of time, he plays the game the way it is supposed to be played. We tried to solve them and we couldn’t, they went out there and they earned (the win).”

Last year Rapid City Central ended the Patriot’s season, with a play-off victory in Box Elder. They then went east and lost to Huron, ending their playoff run. They split with the Scoopers, losing in Rapid City, and then coming to Sturgis and handing the Scoopers a crushing defeat. This season the Cobblers opened with three big victories in Gillette, in tough, close contests, taking out Cheyenne Central, 46-44; Cheyenne East, 48-47; and then rolling over Thunder Basin, 73-48.

Back at home in Rapid, the Cobblers hosted hapless Mitchell, winning easily, 68-43, and on Saturday came the revenge match with the Huron Tigers, and Central walloped them, 73-48. Unfortunately for TJ Hay and his 5-0 Cobblers, the combined record of their victims is 5-21. They have yet to play a team with a winning record. That ended Tuesday night, when they hosted Douglas, results not available at the time of this writing.

Rapid City Stevens has won three in a row after dropping their home opener to defending Class AA champ, Sioux Falls O’Gorman, 67-63. Since then they have beaten, Sioux Falls Roosevelt, 68-62; Huron, 53-51; and Mitchell, 68-43. The combined records of those teams is 3-9.

(James Giago Davies is an enrolled member of the Oglala Lakota Tribe. He can be reached at skindiesel@ msn.com)