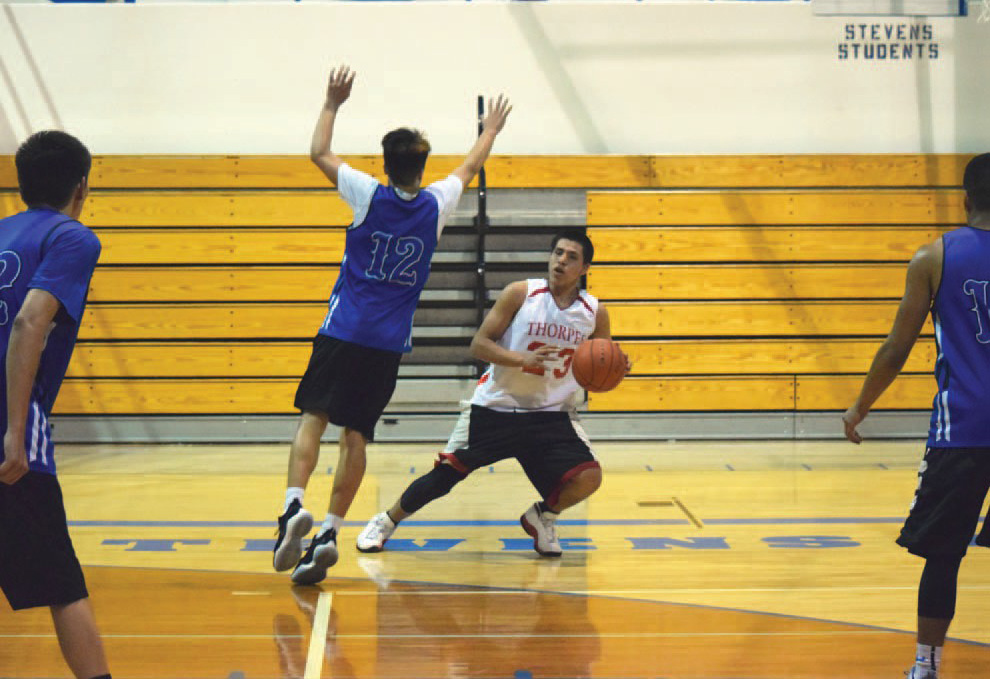 RAPID CITY—Like the first week of Rapid City Steven’s Summer League Basketball, week two started out with a barn burner between Rapid City Central and the Douglas Patriots. These matchups are particularly interesting and revealing because both squads sport most of next year’s varsity lineups. It came down to a last second shot, and Rapid City Central prevailed 72-70.

Russell Morton, point guard for the Patriots, played only four minutes of that game because he is battling mononucleosis. Tyson Bissonette, 2015 Douglas graduate, was coaching Douglas and said Morton was sorely missed over the course of the game: “He creates ball movement.”

Most players cannot readily create their own shot. Notable exceptions to that would be Russell Leader Charge of Red Cloud or Dawson Geuke of Sturgis. Most other players need a point guard to direct the offense and create scoring situations. Morton excels in that department.

When asked what the reason for Central’s late game lead was, Bissonette responded with just one word, “Kailleb.”

As in shooting forward Kailleb Walton-Blanden, Central’s all-purpose, high-flying, cat-quick scoring threat. Injured much of last season, when he is healthy, Walton- Blanden forces defenses out of their comfort zone, and into his. He could be a bit more focused and disciplined, especially on defense, and if he ever decides to be that for every game, Central will be the favorite next year in West River AA basketball.

Douglas narrowed the gap in the final minute and then the ball went into Morton’s hands.

“Russell took the three,” Bissonette said, “but he missed the shot.”

Bissonette takes his responsibility for coaching his old team seriously. He attends OSC now—“I’m trying to be a cop, might try to be a lawyer later on.”—and he said that his primary responsibility is to “keep them settled down and learn from stupid fouls they make.”

Between games members from other teams like Stevens and Sturgis joined the Douglas boys where they were sitting, and boys being boys, they joked and teased, while Bissonette sat right in the middle of them, young enough his presence did not critically inhibit their behavior, but enough of an authority figure they did not go too far.

The second big game of the week was between crosstown rivals Pine Ridge and Red Cloud. Knotted up for most of the game, Red Cloud’s Jesse Jensen put red Cloud up 46-40 with a three. Pine Ridge’s power forward/ center Corey Brown made a free throw to make it 46-41, but Leader Charge went to the line at the other end, to put Red Cloud back up 48-41.

It became a fouling contest in the final minute, which resulted in the final 52-44 score in favor of Red Cloud. Unlike the other teams, Red Cloud has their regular season coach, Christian McGhee on the bench with the team, and what happens in these games will give him good insight into what to expect from next year’s line up. On the flip side, Custer has very few of their varsity players on the court, and underclassmen are getting a baptism under fire playing the varsity line ups of other schools.

Regardless of what an individual team’s roster or opponent is, there is something to be learned by the players and coaches from every match-up.