‘The overwhelming number of good people in a neighborhood always outnumber the bad people.’ 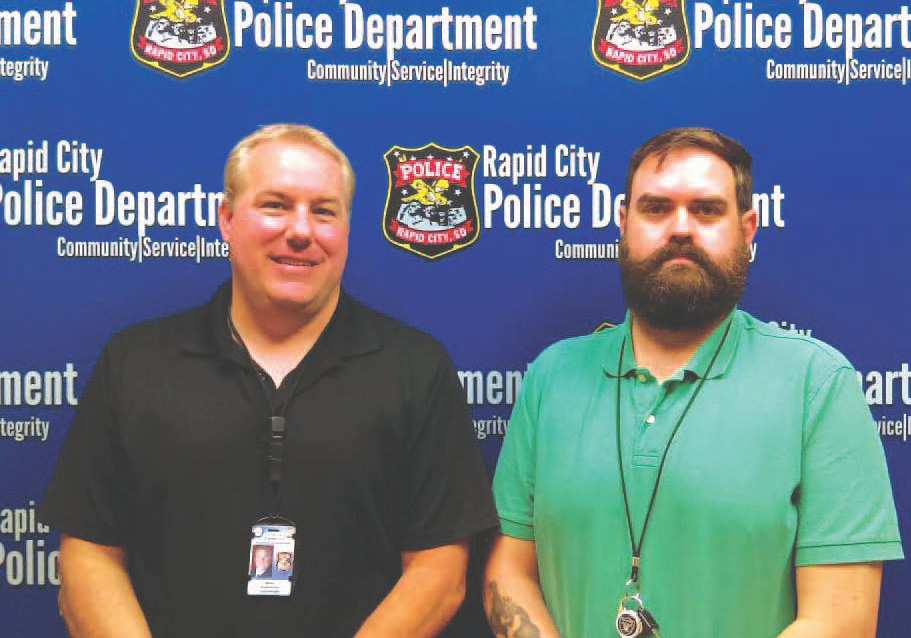 Lt. Mark Eisenbraun (left) and Crime Analyst Chris Stevenson have expressed the importance of the department’s and community’s partnership in fighting crime in Rapid City.

RAPID CITY –– Prevention of crimes in Rapid City can begin with making citizens aware of criminal activities and the types of crimes being committed in their area.

The Rapid City Police Department has a tool which provides such information to the public. The Lexis Nexis Community Crime Map (CCM) has been available on the RCPD website for a few years now. The map can be accessed through the City of Rapid City official website at www.rcgov.org.

A visitor to the CCM website can have recent crime statistics emailed to them on a daily, weekly or monthly basis after signing up for crime alerts on the LexisNexis web- site at www.lexisnexis.com. This service is free of charge and can alert citizens when a crime has occurred in their neighborhood ranging from burglary to homicide. This is a national program available in three cities in South Dakota.

Stevenson has been with RCPD as a contracted crime analyst since Sept. 2016 and Lieutenant Eisenbraun will have been with the department for twenty-one years in Oct. 2017. Both agree, the crime map is an under-utilized tool in crime prevention in Rapid City.

Lieutenant Eisenbraun said of RCPD’s crime analyst, “The company Chris works for, we’ve been with them for three or four years now. Technically, he is an employee of LexisNexis. (Visual Analytics). He is remotely placed in the Rapid City Police Department. So, he’s an expert in the field. The biggest benefit is he has access to resources way beyond Rapid City.”

During his interview with NSNT, Stevenson discussed the importance of community involved policing. “There’s a criminal justice theory called ‘Place Managers’. Basically, what that is, is individuals who can act as a first-line defense. They take the preemptive step to policing their own neighborhood,” said the crime analyst. “Neighborhood Watch is perfect example of that (place managers).”

“This is actually a subset program. There’s a company called Bear Analytics. It was bought out by LexisNexis, it’s kind of a conglomeration of these two businesses. We have a records management system where all our calls come in. I can pull data out. It shows what the officers are doing on a daily basis. We funnel some of that information into the community. There’s more transparency,” Stevenson said during the interview at the Rapid City Police Department offices on Kansas Street in Rapid City. “The crime map has been there. It’s been underutilized for a number of years. It didn’t get a lot of traction. The department wanted to give more access to the community.”

The Community Crime Map provides nearly up-tothe minute crime information, allowing citizens to monitor the criminal activity in their area. “The information comes in from our records management system three or four times a day. It provides some basic information. You can see what kind of crime it was. You can see partial addresses. We do that to protect people’s privacy,” Stevenson said.

Although not an app for a smart phone, Stevenson recognizes the need for such information to be mobile-friendly in the near future: “They are kind of in the development phase as to whether or not they are going to have this as an app. You can currently use this in your web browser on your phone, but it’s a little difficult.”

The importance of community involved policing is to help take criminals off the streets and keep neighborhoods safe, according to the lieutenant and crime analyst. “The people, citizens and visitors are a resource the department relies on almost entirely to let us know what’s going on in the community. We only have a finite number of people we can put on the streets and we can’t be everywhere all of the time, unfortunately,” Stevenson said to NSNT.

Lt. Eisenbraun discussed the importance of this internet tool in crime prevention. “It’s going to help to help us. If they are informed, they are going to take some actions to protect themselves,” said the twenty-year veteran.

The Rapid City Police Department held a community meeting recently for citizens living in the central and west Rapid City areas in hopes of developing the relationships needed. “We already have had a variety of meetings. Unfortunately, we had one Wednesday for central and west (Rapid City areas) and nobody showed up. There is a north side public meeting towards the end of the month (June 22 at Minneluzahan Senior Center),” said Stevenson.

Community policing and collaboration with law enforcement is key to reducing crime in certain areas. “I report statistics both at the administration level and for our patrol level. One of the things I will do is, I’ll identify a hotspot, a particular address or intersection. We are trying to head it off before it becomes a community issue,” said Stevenson.

North Rapid has historically had its challenges for law enforcement. Methamphetamine is becoming more and more connected with crimes of violence, theft and family trauma. Although the Community Crime Map only identifies crimes as “drug” offenses, it can still identify the activity of drug dealers and offenders.

“With our drug stuff, it’s not necessarily that we’re looking specifically for meth, marijuana, heroin or say fentanyl. We put all of the drug information together, because if you have someone selling meth on one corner, you probably have somebody selling another drug on another corner,” Stevenson told NSNT. “The way you attack and disrupt drug supply chains and sellers is not going to change depending on the narcotic.”

For those fearing retribution for reporting crime, Eisenbraun said, “I’ve had those conversations countless times with people. We’ve been alerted to crimes and we’ve had witnesses hesitant to provide contact information because they don’t want to go to court later and testify. They’re worried about their house being damaged or being threatened.”

One of the myths is having to identify oneself after reporting criminal activity. This is not the case in most situations. According to Eisenbraun, “You normally wouldn’t be forced to identify yourself, unless it’s a murder or a serious felony. If you know information and you don’t share it, it’s called misprision of a felony. If you are concerned about retribution, then call and do it anonymously.”

Often, crimes cannot be prosecuted due to reluctant witnesses and those who alert police, leaving these criminals to continue to offend, according to Lt. Eisenbraun. “If we don’t have a name attached to that, sometimes we can’t fulfill that investigation. Also, I can tell you that it’s rare for retribution at least to be reported. In the many years that I’ve been an officer, I don’t see it often.”

Eisenbraun believes in the strength in numbers when it comes to community policing and reporting of crimes. “The overwhelming number of good people in a neighborhood always outnumber the bad people,” the veteran officer closed.