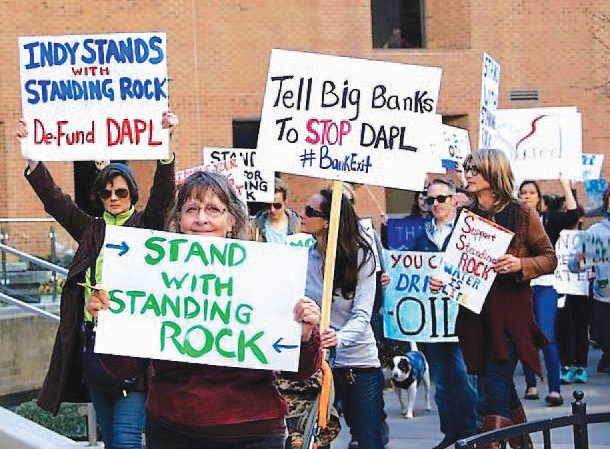 A tribal and grassroots Defund DAPL campaign to convince the public to divest from the banks supporting the pipeline took a stride when BNP Paribas announced the sale of its shares in the loan to the project on April 5.

SANTA CRUZ, Calif. –– On April 6, the Lakota People’s Law Project entreated the public to support an initiative providing congressional oversight on the U.S. Army Corps of Engineers’ alleged misconduct in approving the Missouri River crossing for the Dakota Access Pipeline.

The missive mainly questions transparency in the permit process and requires full documentation of it.

“To our knowledge, the United States Army Corps of Engineers has presented no evidence that it has considered alternatives to protect the water supplies of the tribes, or the nearly 17 million people who live downstream, should this pipeline leak and contaminate the water supply,” said the letter from the ranking members of the of the Senate committees on the Environment & Public Works and Energy & Natural Resources.

The Standing Rock Sioux Tribe has garnered support from more than 300 other tribal governments, as well as thousands of organizations and individuals worldwide, for its ongoing 2015 lawsuit against the Corps over lack of consultation on sacred water and sites in the permitting process.

“Now, we must persist because our message has, at last, begun to change minds at the highest levels of government,” said Standing Rock Sioux tribal member Chase Iron Eyes, lead counsel at the Lakota People’s Law Project, based in Santa Cruz, California.

“Please continue to stand with our #NoDAPL struggle by demanding the army comply with the senators who wish to safeguard my people and our Grandmother Earth,” Iron Eyes said in an open letter. “Let us not accept the executive branch’s collusion in the desecration of the sacred by another careless oil company.”

#NoDapl is a phrase, or hashtag, that social media networks participants utilize to access Internet information on the topic of resistance to the pipeline.

The line is a project of Energy Transfer Partners, Sunoco Logistics Partners, Phillips 66, Enbridge Corp., and Marathon Oil Corp., which took out some $3.7 million in bank loans to building the nearly 1,200-mile toxic fracked oil pipeline.

Its route runs from the Bakken Formation, centered at the Mandan Hidatsa & Arikara Nation, through Lakota Territory in North and South Dakota, crossing the Missouri River half a mile upstream from Standing Rock’s drinking water intake, before heading on through Iowa, and spanning the Mississippi River into Illinois.

President Donald Trump, who was an investor in the pipeline project and received campaign contributions from Energy Transfer Partners CEO Kelsy Warren, ordered the Corps to review that stance on Jan. 24, resulting in the announcement of cancellation of the environmental impact statement process and permit issuance announcement on Feb. 8.

The pipeline companies, in response to a court order to reveal operational progress, stated that oil now is flowing through the line.

Meanwhile, the senators’ letter said, “We sorely lack any understanding of the Corps efforts to make sure that Energy Transfer Partners complies with even the most fundamental environmental safety and mitigation considerations of its easement.”

The letter gave the Corps an April 12 deadline to submit documentation of communications for the period of Nov. 7 through Jan. 24, between members of the presidential administrations, their transition teams, the Corps and Energy Transfer Partners.

It called for responses to these and other interrogatives:

What, if any, recommendations did senior Corps leadership make to the incoming Trump Administration before the President’s Jan. 24 order to review the environmental impact statement process and permit status?

How did the Corps oversee operations to ensure the company and its subsidiaries were meeting their legal observations to refrain from drilling before permitting?

How does the Corps demonstrate that its response to Trump’s order satisfies the government’s mandate to meet federal trust and treaty obligations to tribes?

Which, if any, endangered species reside in the waters and lands impacted by the Corps’ permit?

For such species, what is the plan for their protection, conservation and restoration?

A tribal and grassroots campaign to convince the public to divest from the banks supporting the pipeline took a stride with another financial institution bowing to the pressure and pulling its funding.

Identified with the hashtag #bankexit, the Defund DAPL campaign persuaded BNP Paribas to become the third bank to sell its shares in the loan to the pipeline.

Representatives from the bank contacted the Standing Rock Sioux Tribe to communicate the decision on April 5. BNP Paribas’ action follows similar ones by DNB and ING.

“The tribe commends the bank’s decision, which sends a strong message about the need for banks to respect Free, Prior and Informed Consent in their lending practices,” it said in a written response the same day.

Article 19 of the U.N. Declaration on the Rights of Indigenous Peoples requires governments to “consult and cooperate in good faith with the indigenous peoples concerned through their own representative institutions in order to obtain their free, prior and informed consent before adopting and implementing legislative or administrative measures that may affect them.”

“As corporate greed continues to fuel dirty energy projects on our land, it is heartening to see that some banks recognize the imminent harm to our people posed by DAPL and are taking actions accordingly,” said Dave Archambault II, chair of the Standing Rock Sioux Tribe.

“We appreciate BNP Paribas, ING and DNB leadership and their advanced understanding and respect of tribal sovereignty and Indigenous Peoples rights.” The tribe has met with the majority of DAPL lenders, but no others have taken concrete actions.

Later this month, tribal leaders expect to attend Wells Fargo’s annual meeting, where shareholders will vote on a proposal instructing the bank to improve its policies and practices on the rights of indigenous peoples. Shareholders in DAPL minority stakes companies Enbridge and Marathon are facing similar votes.

“The tribe will continue to pursue divestment, shareholder advocacy and other tactics to show that Energy Transfer Partners’ conduct is unacceptable business practice,” it said.

“The power of people speaking out against the Dakota Access Pipeline is greatly appreciated and today’s announcement by BNP Paribas is proof the fight continues, and we look forward to further progress with the investment community, as well as in the courts,” it said.

Standing Rock’s court challenge has been joined by lawsuits from the Cheyenne River Sioux Tribe and the Yankton Sioux Tribe, alleging, among other things, violations of 1851 Ft. Laramie Treaty rights and religious freedom.

The divestment campaign is an outgrowth of a year’s worth of resistance activities at spirit encampments near the river crossings, rallies, vigils, marches, song, dance, and lockdowns to construction equipment, among other things.

The state only recently reopened North Dakota Highway 1806, blocked by law enforcement for many months during the standoff with campers from around the country. The closure, which was lifted March 21, had deterred transit between spirit camps, as well as between Standing Rock Sioux tribal headquarters in Ft. Yates and North Dakota’s capital of Bismarck.