Crosstown slugfest lives up to hype

Both teams leave the floor in one group, left to right: Camden Talley, Josh Schumacher, Trey Eberlein, Dawson Paulsen and Kailleb Walton-Blanden. Standing to the right is Elijah Williams.

RAPID CITY— Sometimes a coach will tell his players not to get caught up in the hype, that it is just another game, but the moment the players step out onto the floor, the packed and raucous house puts the kibosh on that notion very quickly. There is no sporting event in South Dakota that can match a Cobbler v Raider crosstown showdown. Friday night last, Rapid City Central, the number one ranked team in the state, took on host Rapid City Stevens, the number two ranked team in the state, and after 32 minutes of the best basketball entertainment to be had anywhere on this planet, the Raiders raised their record to 13-2, with a 57-53 victory over the archrival Cobblers, who are now also 13-2. 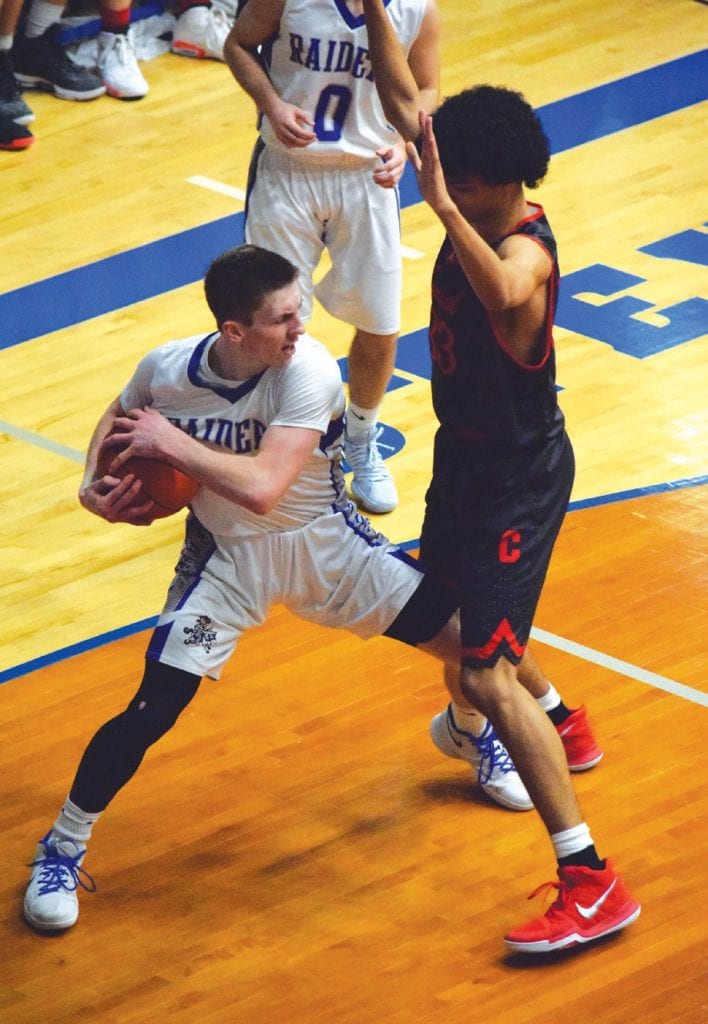 The toughest player on the floor, Stevens’ Cooper Bowman, protects the ball from Central’s Elijah Williams.

“That’s quite the atmosphere,” second year Stevens Head Coach Chris Stoebner said outside the locker room. “As a coach you try and tell the players it is just another game, but it’s not. I’d like to find another high school atmosphere that is like this.”

The atmosphere is so intense, that if Stoebner told you right then he had the best job in the world, you would believe him. But even the losing coach, Central’s TJ Hay, could not help but acknowledge the atmosphere over the defeat: “It’s fun for our kids, fun for everybody.”

Both coaches identified the main reason for the result right off the bat.

“We were all over the (offensive) glass,” Stoebner said.

“We shot ourselves in the foot by not boxing out,” Hay said.

The final rebound totals, offensive and defensive, are almost dead even, so it is what the Raiders did with those offensive rebounds that spelled the difference—they converted them into buckets, they got fouled and went to the line and scored seven more points on free throws. This dug a hole for Central, but in every other respect the Cobblers gave it their all and statistics were about dead even.

“There’s a big difference in playing catch-up and being up by four or five,” Hay said. “We wanted to get more post touches, and we didn’t. We didn’t get to the free throw line very often.”

From the tip-off Stevens let Central know they planned on controlling the game tempo; long, lanky Will Moore powered through the paint to put the Raiders up 2-0. But—for the next few minutes everything would happen just the opposite of how the game would end. Central would tie it 2-all, when Kailleb Walton-Blanden missed a shot, and Elijah Williams scored on a put-back. This was the formula Stevens would soon use to win the game.

Dawson Paulsen missed one of his corner threes for Stevens, Walton Blanden rebounded, passed it to Cameron Hall, who nailed a three, and Central was up, 5-2. Connor King closed it to 5-4, by taking the ball the length-of-court for a Stevens lay-up. That brought the game to a curious juncture.

Williams snatched an offensive rebound and was fouled by Trey Eberlein. Williams went to the line and sank both free throws, Central now up, 7-4.

“He always gives us great energy,” Stoebner said of Eberlein, also adding that the problem has been to harness that energy into results on the floor.

Eberlein was clearly extra fired up for this game. Last year he was a Cobbler, but became another example of a Native ballplayer leaving Central for other programs, by jumping to Stevens this season. Whatever reservations Stoebner had about Eberlein’s focus, he started him, given Gib Elder was out with an injury that will have him out until the final game of the regular season.

Cooper Bowman scooped up a loose ball for Stevens, he passed to Eberlein, who drove the paint, but missed the shot. Eberlein rebounded the miss, and Williams fouled him. Central didn’t know it then, but the failure to box out Stevens from the offensive glass had just gotten underway.

But not before Central took an 11-5 lead on a baseline drop shot from Dylan Hay and a nifty assist from Walton-Blanden to Camden Talley right under the bucket. This would be their biggest lead of the game, and the first quarter would end after Stevens fought back, Central on top, 17-16.

Eberlein opened the second quarter by driving aggressively to the basket. He missed but Moore converted the put-back, Stevens up, 18-17. They would build that lead to 26-19, when Walton-Blanden tried to drive the Raider baseline but was surrounded by a trio of defenders. He struggled to get the ball to Dylan Hay who shot an air ball three. Bowman rebounded, passed the ball to the ever aggressive Eberlein, who again forced his way into the paint but missed, and again the offensive rebound went to Stevens, this time to Kieran Jurgens, who scored his only bucket of the night, but it put Stevens up, 28-19. This forced a Central time-out with 3:37 left in the half.

Eberlein was missing buckets but his persistent aggression driving the lane was exposing Central’s inability to box out the Raider attack, and it was resulting in a lot of put-backs.

Coach Hay’s timeout worked. Central scored eight unanswered points, and when Walton-Bladen hit a three from the top of the key, it was 28-27, Stevens, with 50 seconds before halftime. The half ended with Bowman missing a shot, and Josh Schumacher putting the ball back in the hole with a tip-in, Stevens on top, 30-27.

“We had a couple of runs where we’d be up by eight or nine and they’d come right back,” Stoebner said.

In this case, Williams opened the second half by tying it up at 30-30. Paulsen then missed a three and Eberlein scored the put-back. Stevens would build that lead to 39-32, but when Williams dropped a bucket in over the fingertips of Eberlein, it was 39-37, Stevens, and Stoebner called a timeout with 3:16 left in the third.

That timeout worked because the third quarter ended with Stevens ahead, 41-37.

The first half of the last quarter belonged to Central. After King missed a shot, Walton-Blanden rebounded, and then drove the lane at the opposite end where he was fouled by Moore, basket counting. After Walton-Blanden hit the free throw, Central led, 46-45, 4:06 left to play. Stoebner called time out.

King responded by hitting a three. Eberlein then stole the ball, passed it to Moore, who found Schumacher under the basket and it was, 50-46, Stevens. The battle would continue even up until just 20.7 seconds remained, and Walton-Blanden launched a deep three that swished home and Central was down only 55-53. Coach Hay called a time out.

Back on the floor Hall fouled Bowman who hit one of two, 56-53, Stevens.

It was obvious Central wanted Walton-Blanden to get the ball and shoot another three, and he had the ball, just needed to get some separation to launch the bomb, but the ball skittered away off his fingertips, there was a mad scramble, Dylan hay came away with the ball, got it back to Walton-Blanden, who couldn’t get set for his desperation three and it fell just short of the rim.

Moore added one more free throw, and with 2.5 seconds remaining, Walton-Blanden launched a long three that missed at the buzzer.

Walton-Blanden had 13 points for Central, six assists, and seven rebounds. Williams had 11 points and eight rebounds. Mason McBride did some nice work inside and added 10 points.

Stevens will end the season with a rematch over at Central on February 15. That will be standing room only. Central will have two more games after that against Spearfish and Sturgis.

Despite the loss, Central is still the top ranked team in the state.

“They’ll bounce back,” Coach Hay said. “I wouldn’t trade my guys for anybody. We just have to take care of the little things. They don’t understand how important it is to get a box out on the backside.”