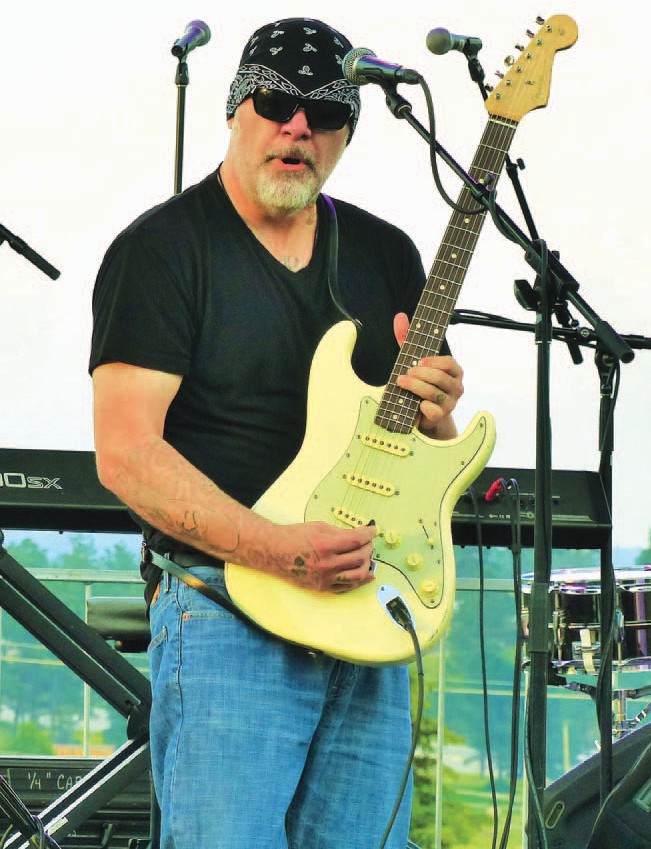 CUSTER –– The Southern Hills Music and Art Festival (SHMAAF) brought the music and stories of 48 performers to Custer for this annual event in its second year.

SHMAAF was held on Aug. 18 and Aug. 19 with headliners Jefferson Starship and Atlanta Rhythm Section closing out the events on Friday and Saturday nights.

Hundreds gathered at dusk for the evening session of the Southern Hills Music and Art Festival. Pageant Hill Park in Custer played host to the music festival and the hill in front of the stage made for good acoustics as the sound echoed north into the Black Hills.

This second year of the event has brought out big names and event founder, Kevin Teasley, has extended the invitations for performers deeper into the Black Hills area for this year’s event.

The Brandon Sprague Blues Band can be seen throughout the year at the Deadwood Tobacco Company and Cigar Bar in the northern hills. “I had never been here before, my pops (Donovin Sprague) set this gig up. We got up here (Pageant Hill Park in Custer) and it’s just such an amazing place. It’s just such a beautiful backdrop with the trees and the cliffs, man. It makes it so easy play music,” Sprague said of playing at SHMAAF.

Sprague said the Black Hills plays a special part in his music and life. As a resident of Rapid City, Brandon uses the spiritual energy of the Black Hills as inspiration. Sprague’s father, Donovin, is a local author, educator and historian and provides his son with the knowledge of the area. “It feels good to be here in the Hills. It’s my heart and soul. It just feels good to be here,” the son Sprague said of playing in Custer. “It’s magic. It’s magic for sure. It’s pure energy. You have bad nights and good nights and this was definitely a good night. I definitely felt it here.”

As far as recent gigs, The Brandon Sprague Blues band was featured at Jazz Fest in Sioux Falls and most recently entertained international bikers during the Sturgis Motorcycle Rally. “The summer is kind of winding down. We did the Rally and a few other things this summer. We’re just settling in for the winter, really,” Sprague told NSNT during the post-performance interview in Custer.

Sprague is a typical blues musician who prefers to let his guitar do his talking for him. This humble Lakota man has performed in countless venues over the years and toured with the great BB King.

“We’re working on a CD. We’ll have that done this winter. Everything will be original. There’s no set release date. I probably have like 25 songs right now. We’re just trying to weed out what I don’t want. It’s like aw man; to me, I love them all. It’s like, why don’t we put out a double album,” he said of his studio work.

When it comes to talking about his inspirations, he reverts to a child-like grin of admiration. “It’s the old blues masters. Every day I go off on my little tangent about listening to Little Walter (blues harmonica player who died in 1968), Albert King and obviously BB King,” Sprague told NSNT. “I listen to those guys on a daily basis. All the old guys and there’s a few new guys doing the old traditional stuff. I listen to the old guys a million times and it’s still creates a fire, a fire in me. It just blows my socks off still.”

Brandon Sprague wanted to thank Kevin Teasley, Executive Director of SHMAAF, as well as organizers and volunteers for the hospitality and great venue. Of Mr. Teasley, Sprague said, “He’s a great guy. The place is packed and everyone seems to be enjoying themselves. And look at the setting, it’s a perfect setting. I sure hope they keep this up (SHMAAF).”

Native Sun News Today interviewed the Executive Director of SHMAAF regarding the southern hills event, who said he would like to encourage other Native American performers from the region to participate. He believes music is a connecting factor and plays a significant role in community building, race relations and is an excellent source of revenue for the Custer area. He wants to invite performers from all walks of life and genres to participate in next year’s festival.

Sprague shares Teasley’s sentiments and would like to see the festival grow. “I totally encourage them (bands from the region) to come here and keep playing. Everybody has it rough and things get rough, but there are people who have it a hell of a lot worse. Music seems to help. It’s something to calm your soul. It’s a stress reliever and I swear if I didn’t have this, I don’t know what I would have,” Sprague said in closing.

For more information regarding the Southern Hills Music and Art Festival, visit www.southernhillsmusicandartfestival.com.