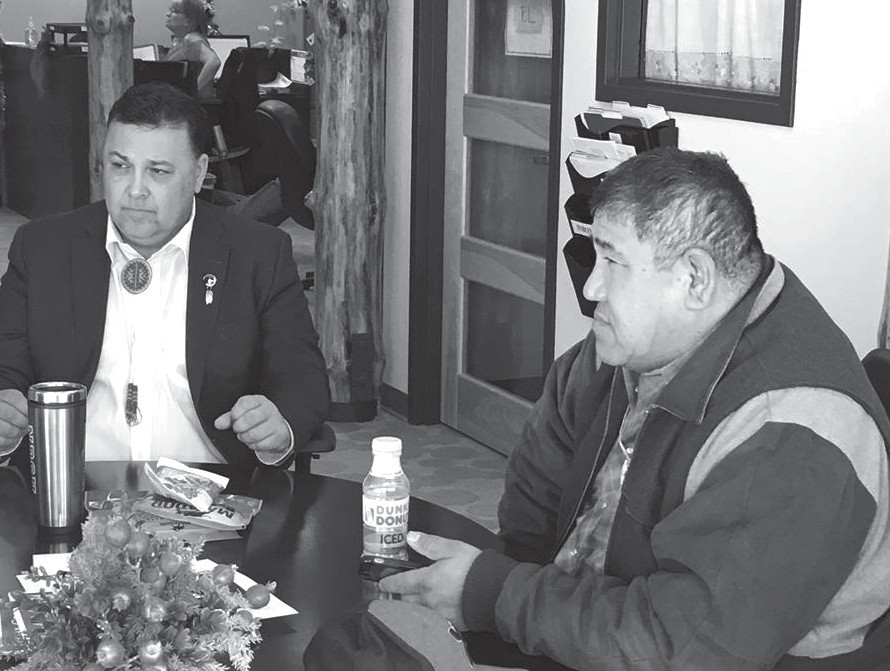 AMHERST — Cheyenne River Sioux Tribal Chairman Harold Frazier travelled to Amherst to see for himself the damage of the Keystone 1 Pipeline spill.

Chairman Frazier travelled with a delegation of his tribal administration and the tribe’s Environmental Protection Department.

Remi Bald Eagle, CRST Intergovernmental Affairs Coordinator, travelled with the Chairman. According to Bald Eagle, when the delegation arrived at the spill site checkpoint, they immediately began searching for a contact to speak to.

“There were no instructions posted. There was a building nearby with a stop sign. We stopped and then drove forward looking for someone to speak with,” said Bald Eagle.

According to Bald Eagle, a Marshall County officer was parked behind a small building and was concealed by the building. The driver of the vehicle did not see the officer as he drove by. The officer proceeded to follow the Chairman’s vehicle and pulled it over.

The officer was visibly upset and began threatening to arrest Chairman Frazier’s driver and the vehicle occupants, said Bald Eagle.

“We were threatened with imprisonment, though he refused to say why, just that ‘he could take us to jail’, which he repeated multiple times,” said Bald Eagle.

Chairman Frazier identified himself. According to Bald Eagle the law enforcement officer said “There is nothing to see here. The pipe has already been cut out and sent to Washington, DC for investigation.”

A few minutes later, a second law enforcement officer arrived at the scene and the driver of the Chairman Frazier’s vehicle was issued a citation for $120.00 for “failure to yield to an emergency vehicle.”

According to Bald Eagle, TransCanada security arrived at the scene and provided Chairman Frazier with contact information for a company’s representative and instructed the delegation to wait north of checkpoint.

“At that point we were still a mile from the spill site,” said Bald Eagle

After waiting for an hour, a group consisting of a representative, brand security manager, and incident site manager from TransCanada arrived to speak with Chairman Frazier.

According to Bald Eagle, the incident commander said, “You see all the stuff I am wearing? It says ‘Safety First’ on my helmet. You can’t be allowed at the spill site without the property training or protective equipment.”

A quick question and answer session occurred before the TransCanada group left. The Cheyenne River delegation and Chairman Frazier then travelled 30 miles to the Lake Traverse Indian Reservation to visit with tribal Chairman Dave Flute.

“We went there to speak with Chairman Flute and learn the consensus on his reservation. They were given reports that clean-up was on the way but don’t know the long term effects that the spill will have on the land or water,” said Bald Eagle.

After meeting with Chairman Flute, the CRST chairman and his delegation headed home.

“I went to the spill site to try to find some answers. We were not treated with professionalism from law enforcement. We didn’t get any answers that we were looking. I stand behind Chairman Flute and the Sisseton Wahpeton Oyate, and I support his decisions,” said Chairman Frazier.