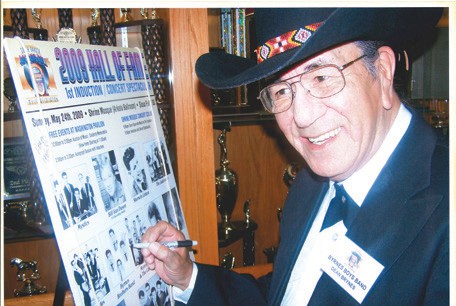 PIERRE — Delwyn “Dean” Byrnes, 76, peacefully passed into the Spirit World on Monday January 22, 2018 at 4:30 p.m. surrounded by his family at the Mary House in Pierre.

Delwyn “Dean” Byrnes was born in Lower Brule, South Dakota to Grace Byrnes and Russell Long Turkey. He was later raised in Huron and Rosebud. Dean graduated from Todd County High School in 1959, where he played basketball alongside his older brothers. But his real passion in life was rock and roll music. He began playing guitar; drums and singing at the age of 12 for the Byrnes Brothers Band, the first all Native American Rock and Roll Band that set the Reservations and Dance Halls of South Dakota on fire during the 50’s and 60’s.

Moving with the band to California (IRA) Dean worked at IBM in San Jose, Calif. where the band continued to play as an opening act for the likes of Conway Twitty and Chet Atkins along with many others.

He moved with his (then) wife and son Dean, later his daughter Shara was born in California and it was there Dean and his brothers made their home along with Mother Grace Byrnes.

In 2001, Dean moved back to South Dakota after his brothers passed and he made his home in Pierre, where he worked at the State Capitol for ten years.

Dean is a direct descendant of Chief Iron Nation and member of the Kul Wicasa Oyate, Sicangu Lakota, Lower Brule Sioux Tribe, because of this we had an honoring the Circle of Life Ceremony on Friday at the Lower Brule Community Center in Lower Brule. Funeral services were held on Saturday, January 27, 2018 at Messiah Episcopal Church in Iron Nation.