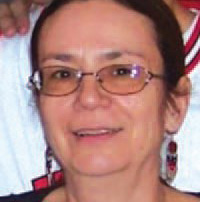 PINE RIDGE-Dianne Lynn Schrader “Mahpiya Luta Win”, 54, made her journey to the Spirit World on Thursday, May 25, 2017 at her home in Pine Ridge.

Dianne Lynn Schrader was born on June 5, 1962 in Phillip to Douglas and Delores (Winters) Schrader.

Dianne was preceded in death by her parents, Douglas and Delores Schrader; spouse, William Watters; brother, Raphael Schrader; and sister,