Expected to be important role player on basketball team 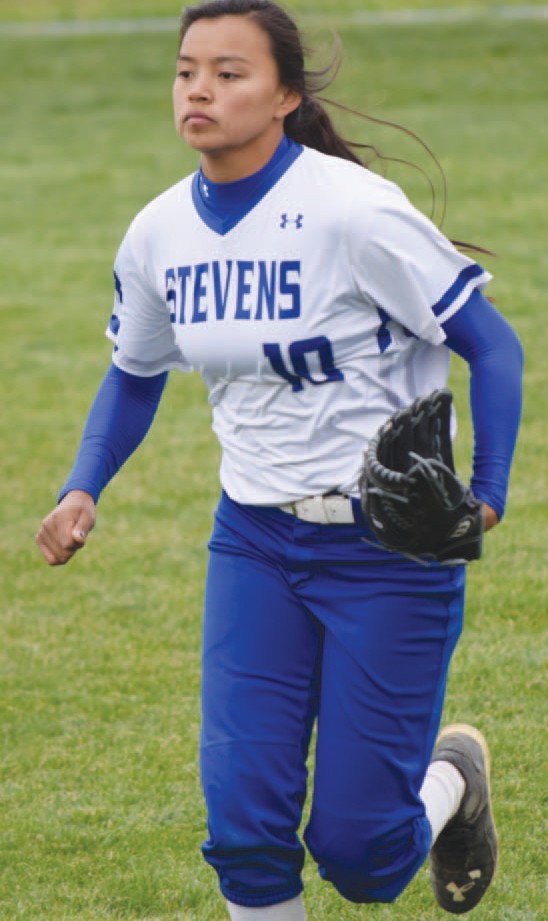 RAPID CITY— If you saw Lexus Eagle Chasing standing in the hallway at Rapid City Stevens High School, you would not think of her as a standout two-sport athlete. She is slim and shy and doesn’t seem like she could muster the speed, the strength, the grit, to impose herself in an athletic competition.

Fifty years ago, before Title IX, Eagle Chasing would have been relegated to a set of pom-poms, and no doubt she would have excelled at cheerleading, but for two generations girls have been making up for centuries of exclusion; they have been developing their own sports sub-culture, and this process is reinforcing the old adage you can’t judge a book by its cover.

Whether coming off the basketball bench to pump in an explosive fifteen points, or driving a softball out of the yard, or running down a line drive otherwise destined to rattle off the outfield fence, Eagle Chasing has made it to her senior year as solid bat and steady glove in girls softball, and a key role player for one of the better Class AA basketball programs in the state.

It has not been an easy road. Last year, Stevens started the year with a basketball team other schools could only envy. All they needed to be the prohibitive favorite for a state title was a big rebounder in the paint. This they did not have, but the other components were enough to defeat an extremely talented and aggressive cross town rival, Rapid City Central, during the regular season.

Coach Michael Brooks abandoned his established players halfway through the season. “He went with the younger players,” Eagle Chasing said, and in the end, the wheels came off for the Lady Raiders, and they laid an egg against the archrival Lady Cobblers at the State AA.

Eagle Chasing was primed and ready to contribute in that circumstance, although her role playing was substantially reduced. Her relationship with coaching has had some rough patches. She started at Rapid City Central, and as a sophomore, a false accusation over a highly personal matter from her head coach drove her across town to Stevens High School. This was more an act of principle, than any port in a storm. She received an apology from the coach but the entire situation did not sit well with her parents, James Eagle Chasing and Lourdes Parker.

At that time, Lakota athletes were coming over to Stevens in droves from Central, and that exodus still continues. Seven of the 12 members of the Boys basketball team were Lakota, whereas just a couple decades ago, no Lakota played for Stevens. Eagle Chasing found a ready home with the Lady Raiders, and her striking appearance, and singular presence on court, made her a fan favorite.

One thing her parents and coaches say about Eagle Chasing is she is a quick learner and highly coachable. James Eagle Chasing said, “I was able to coach her and advance her skills in a rapid manner.”

Lexus has plans after high school: “I plan on playing basketball. My goal is a D-1 college.” That goal, is every ball player’s goal, but she had some good experiences this summer: “We went to camps in Nebraska, the coaches all thought I did a good job.”

When she has her confidence, and she is moving aggressively on court, Eagle Chasing can spark instant offense, disrupt passing lanes, force turnovers. She moves with the graceful fluidity characteristic of the best Lakota ballplayers, but like so many of those same athletes, she has yet to master her self-confidence. It comes, and it goes, and when it goes, she is not the same ballplayer.

The one sport where she seems consistently focused and confident is softball. Last year she helped the Lady Raiders to an undefeated regular season, where they lost only one game, the state final to nemesis Sioux Falls Roosevelt. Prospects appear to be similar this season. They beat crosstown rival Central last week 4- 0, but they lost to Roosevelt 8-7.

“She’s a gutsy outfielder,” Lady Raider Head Coach Sherry Grismer said. “She covers ground like crazy out there. When Lex came to us as a softball player last year, she was really quite green. But we knew she had the potential to be a really good player. She started this season a little slow at the plate, but her batting av

If we could have gotten our hands on her five years ago, she would have been phenomenal.”

Grismer feels there is potential for Eagle Chasing after high school: “There’s ten colleges in South Dakota that have softball programs. Every summer Augustana comes out and does a camp. Last y ear there were college coaches that actually got down and played with the kids.”

Other players on the Lady Raider roster drawing interest are left-fielder Sarah Keene, who will be attending the University of Sioux Falls, and shortstop-catcher

Emma Burns, also an excellent basketball player, as well as a high jumper.

Eagle Chasing plans “on going to college and major to be a veterinarian.” Her favorite high school class is anatomy and physiology. Her sister, Hailey, is at the School of Mines, pursuing a degree in chemical engineering, with plans to be a medical doctor.

For now, Eagle Chasing seems tightly focused on what she needs to do in high school to achieve her goals. Every day the grind goes like this, get up early, go to school, go to softball practice, and the only thing that breaks up the monotony is: “Sometimes I go to the gym after school because I get off at one thirty.”

Like many athletes, she has no social life, by the time her daily schedule is completed, “I usually just go to sleep after that.”

Next week there is another showdown with the Lady Cobblers, and the week after that the team is off to Sioux Falls for the state tournament. Roosevelt will be the favorite, but having only lost to the defending state champions by one run this year, and having lost only one game last year, to the same team, Stevens has to like their chances.

(James Giago Davies is an enrolled member of the Oglala Lakota tribe. He can be reached a t skindiesel@msn.com)