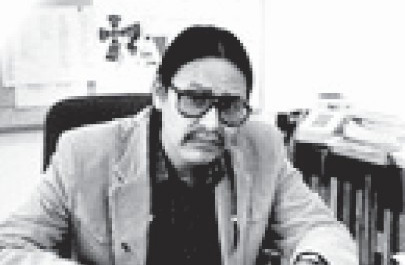 Elgin was born on April 19, 1946 to Daniel Bad Wound and Julia (Monroe) Bad Wound at the Taopi Sica homeland more famously known as Ten Bar (for the branding that was put on the horses there). He leaves us with a long history, both academically and culturally, and those who knew him were blessed by his words of wisdom and teachings across the entire community.

From 1969-1971 he served in the U.S. Army with a tour of duty in Vietnam for 15 months where he received the Army Commendation Medal and achieved the rank of Specialist Five, before being honorably discharged. Two years later, he would enter college.

His education stems from encouragement by elders to pursue all he could and bring back what he learned to help the Lakota Oyate. He graduated from Pine Ridge High School in 1965, attained a Master of Arts from the University of Colorado in 1978, and accomplished further with honors by Pennsylvania State University in 1990 with a Doctor of Education in Higher Education.

Among his many accomplishments, he served as an education consultant across the Pine Ridge Reservation and beyond; he also served as Vice President from 1978-1979 for the Oglala Lakota College before his selection as President from 1979-1986 and 1990-1993. He played a leading role in designing and implementing the Lakol Ikce Oyate Peta Ilekiyap to promote growth of social, economic, cultural, educational, and spiritual development and work to revitalize the traditional and tribal structure, culture, philosophy and the Lakota language. Other feats include, his Presidency of the American Indian High Education Consortium and various school boards. His biggest accomplishment came with his Doctorate that culminated following a presentation of his Doctoral Thesis titled: Leadership and American Indian Values: The Tribal College Dilemma.

Elgin, Tasunke Kokipapi, with his Doctorate in Higher Education, could have worked anywhere in the United States and even other parts of the world; however, he chose to return to the people to do whatever he could to sustain the development of culture and language. He believed wholeheartedly that he could do this with the support of so many who shared his vision that the Lakota people would live long and strong, and to instill in others to go forward, but always look back and remember all ancestors who got us here. Later in life, he became a leader of the “Wiwang Wacipi” (Sundance) hosting five ceremonies at the Bad Wound homeland.

Elgin’s legacy will live on and he will be greatly missed by all who knew him.