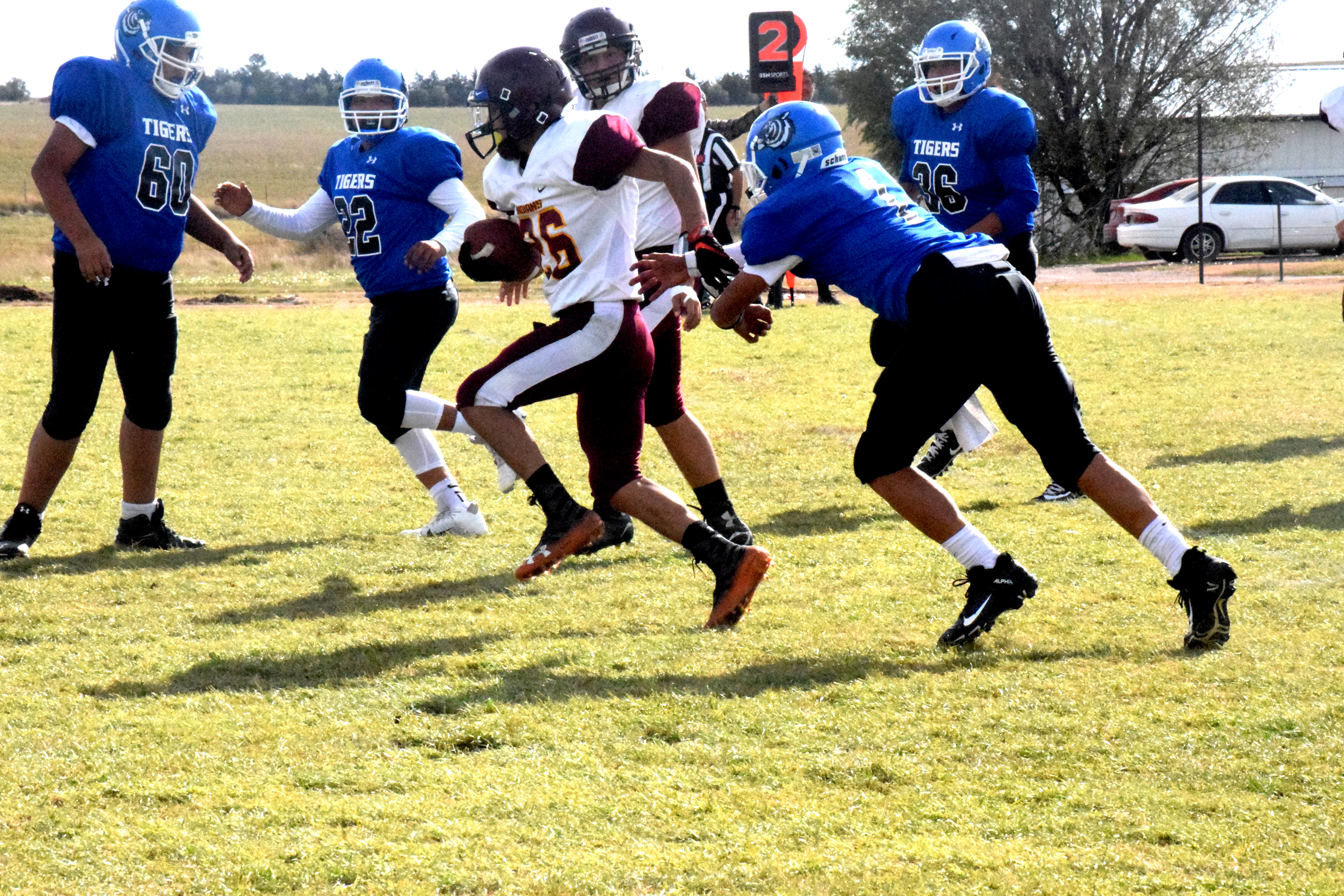 OELRICHS—Last Thursday the first playoffs got underway in the inaugural season of the All Nations Football Conference. There were four games, the top four seeds sitting out the first week, and the favorites won every game.
Cheyenne-Eagle Butte 52, St Francis 12.
The Warriors went 1-6 on the season, with one win, over Oelrichs, 58-6. CEB started the year off with two wins, 60-0 over Crazy Horse and 40-6 over Oelrichs. They ran into Red Cloud, on the road, and lost 58-6. At LNI, they bounced back and beat Tiospa Zina, 54-32. That was followed by a 50-0 win over neighbor Takini, and a 60-24 loss to greatly improved Little Wound. Their next game will be next Thursday at Lower Brule, who is the number three playoff seed. Odds are, Lower Brule will prevail in that game, but CEB does have the roster to make a run if they can maintain discipline and focus.
Marty 50, Crazy Horse 0
The Chiefs lost five straight, scoring only one TD, before they finally beat Takini, 50-0. Marty started the year with a narrow loss to Zina, 18-14. They then lost 50-0 to Crow Creek. This was followed by back-to-back wins over St Francis, 26-14, and Crazy Horse, 51-0. Lower Brule beat Marty, 40-14, and then the Braves had a good win over Flandreau Indian, 34-18. Next Thursday they drive over to Red Cloud to take on the unbeaten top seed.
Tiospa Zina 94, Takini 8
Zina was an 11-man program last year, and this is the first year of football for Takini, the smallest school in the ANFC. The way mercy rule works is the game must go to halftime. Until then, the scoreboard can light up and this one sure did. Not much was known about Zina football in West River, but they opened with two wins, 18-14 over Marty, and 61-20 over St Francis. Lower Brule handed them their first loss, 52-0. That was followed by the loss at LNI to CEB, 54-32. The Wambdi got a good win over East River rival Flandreau Indian, 36-26. They then lost to Crow Creek, 42-8. Next Thursday they are at Little wound, the fourth seed in the playoffs.
Flandreau Indian 66, Oelrichs 14
There hadn’t been any football played in Oelrichs since 2011. There is no public address, no lights, a tiny crow’s nest with a tiny concession stand beneath it, and the hot dogs only cost a buck. A fair number of Tiger faithful drove over from Pine Ridge to watch the depleted ranks take on Flandreau Indian. The Indians prevailed, 66-14.
The Tigers would start the game without two of the better players in the entire ANFC, Justin Eagle and Benny Benson. During the game they would lose two more excellent players, junior quarterback Lewis Wilson, to injury, and junior running back and outside linebacker Sam Warrior to disqualification. The Tigers toughed it out to the end and their season rolled to a stop with the tank empty.
The big player for Flandreau Indian is always Favian Sanchez, a quick, scrappy sophomore running back, but it was the big boys on the line, on either side of the ball, that made life difficult for the ailing Tigers.
“We been preachin’ since about week one,” said Flandreua Indian Head Coach Dustin Headrick, “we only go as far as the offensive line and the D-line goes. The offensive line creates holes for (Favian Sanchez), he’s a very good football player.”
People out in West River don’t get a chance to see much of Flandreau Indian. “So far the (ANFC) has been an amazing opportunity for our kids,” said Headrick. “We have a lot of kids from out West River, Pine Ridge, Rapid city area, and their families and friends get to come out and watch them when they usually can’t travel across the state.”
A gracious moment of great sportsmanship came near the end of the first half. Flandreau needed but one more score to force the mercy rule before halftime, but injuries forced Oelrichs to bring in their last player, Jeeter Shockey. Once the developmentally disabled Shockey was handed the football, the Indians intentionally allowed him to break their tackles, until he romped the length of the football field and scored. The score forced second half play but it was a touching moment people at the game will remember for a long time.
The reward for beating Oelrichs in the first round, is to have to take on Crow Creek in the second round, and many consider the unbeaten Chieftains to be the best team in the ANFC. This is the only repeat match up so far in the playoffs and Headrick said mental errors put his Indians in a hole against Crow Creek the first time they played, Crow Creek prevailing 54-8.
“Crow Creek’s a great football team,” Headrick said, “so we’re gonna have to bring it.”