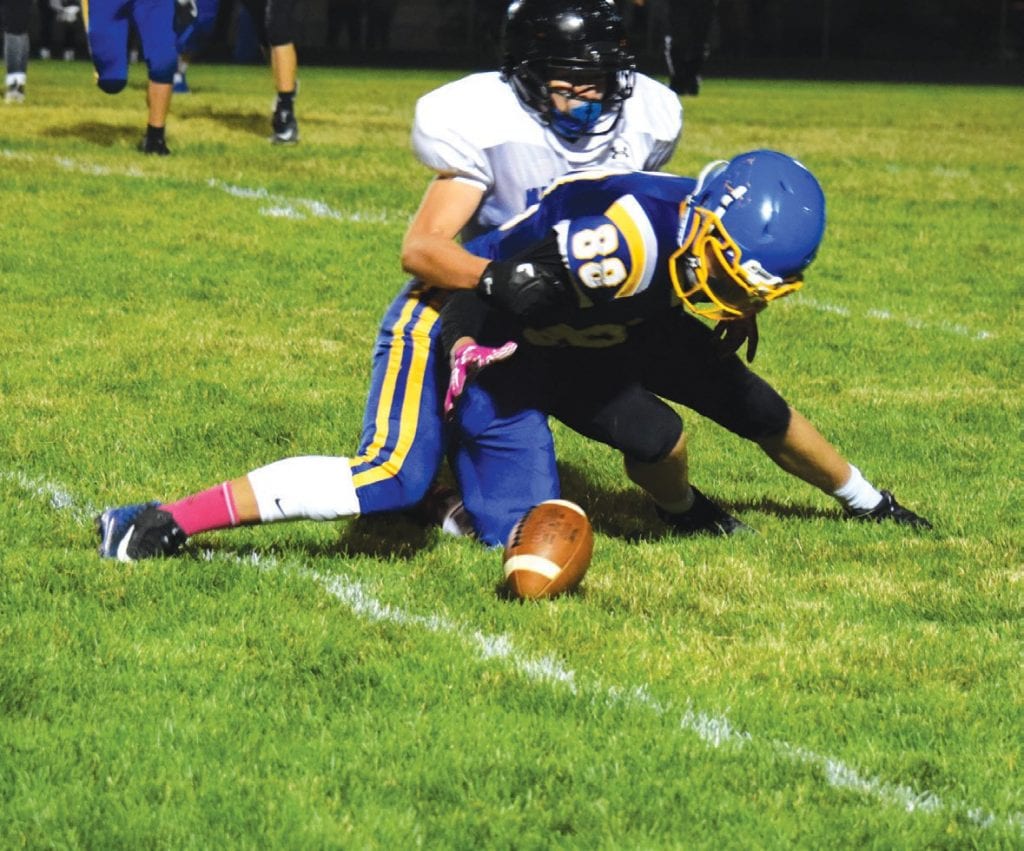 RAPID CITY — Time for some play-off football predictions, which once again must be tempered with the following caveat: no matter how strong the program, how good the game-day coaching, how quality the players, how fortuitous the matchups— when you are dealing with teenage boys, anything can happen.

11-B Play-offs opening round

Mobridge-Pollock (4-4) at Aberdeen Roncalli (4-4): A revenge match. M-P had AR at home six weeks back and beat them 19-18, probably the best football game of the season. AR did slightly better against their other opponents, and one of those was a 21-0 revenge win over Groton Area, for knocking Roncalli out of last year’s play-offs. M-P lost to GA, 28-20. Prediction: Roncalli 32, Mobridge-Pollock 21.

Canton (4-4) at Sioux Falls Christian (7-1): Back on Sept. 8, SFC beat Canton, 36-12. This rematch figures to go little different. SFC opened the season with a 24-6 win over defending 11-B Champ Winner, but when they locked horns with unbeaten Sioux Valley they came away 21-14 losers in a tough game a break here or there could have given them a win. Prediction: Sioux Falls Christian 38, Canton 15.

McCook Central/Montrose (5- 3) at Bridgewater-Emery/Ethan (6-2): BW-E/E has pretty much crushed every team they have played with the exception of unbeaten 11-A Madison, who beat them 33-6, and a 27-15 loss last week to Sioux Valley. They beat McCC/M 34-0 in their first meeting. Will somebody someplace do something about all these hyphenated/ drive-a-person-crazy team names? Prediction: BW-E/E 38, McCC/M 6.

Stanley County (5-3) at Winner (6-2): Two things make this outcome really bad for Stanley County. They lost earlier this year to Winner, 42-6, and they lost their last game, 41-6, to Chamberlain (5-3), a team mercy-ruled by Mount Vernon/Plankinton. Prediction: Winner 52, Stanley County 0.

Lead/Deadwood (5-3) at Red Cloud (6-2): How this game goes depends on whether Russell Leader Charge is back full strength for the Crusaders, because if he is, he adds a strong presence on defense, and no player in the state, unless it is teammate Ale Rama, can match him on offense. Leader Charge is a threat to take it to the house any time he touches the ball in any situation. His speed is such no defensive back in the state can run him down from behind. The Diggers, game as they are, cannot prevail if Leader Charge is even at 75%, because if they try to key on him, quarterback Rama will run roughshod for huge game altering gains.

In the season opener, Red Cloud went up to Lead/Deadwood, and won 46-32, but lost Leader Charge to elbow injury for most of the season. This will be a much tougher and determined opponent for Red Cloud. The Crusaders have lost only to two 11-A opponents, Pine Ridge and Todd County, although they lost badly. They have a problem wearing down against big offensive and defensive lines, but the Diggers have neither. Prediction: Red Cloud: 40, Lead/Deadwood 33.

There are no Lakota teams left at 9-AA, but this is probably the easiest class to call. Two 8-0 teams stand way above the others, the Gregory Gorillas and the Hamlin Chargers. Both are tied in power points at 47.250. Gregory’s convincing victory over previously unbeaten Bon Homme is convincing enough to give them the edge. Predicted 9-AA Champion: Gregory Gorillas

9-A Play-offs opening round

One Lakota country team survives in 9-A, Timber Lake. Corsica-Stickney appears to be the best team in the running. Howard and Britton-Hecla are 7-1, although Warner has more seed points at 6-2. Predicted 9-A Champion: Corsica-Stickney Jaguars.

New Underwood (5-3) at Timber Lake (5-3): This one is really just a coin flip. One team will catch a few more breaks than the other, neither team will vie for the state title. Prediction: Timber Lake 34, New Underwood, 24.

9-B Play-offs opening round

One Lakota country team survives in 9-B, Colome. This is by far the toughest state football title to win. This Class is flat out loaded with double tough teams, one of them being Colome.