Means honored for his many accomplishments, especially his work on Mni Wiconi 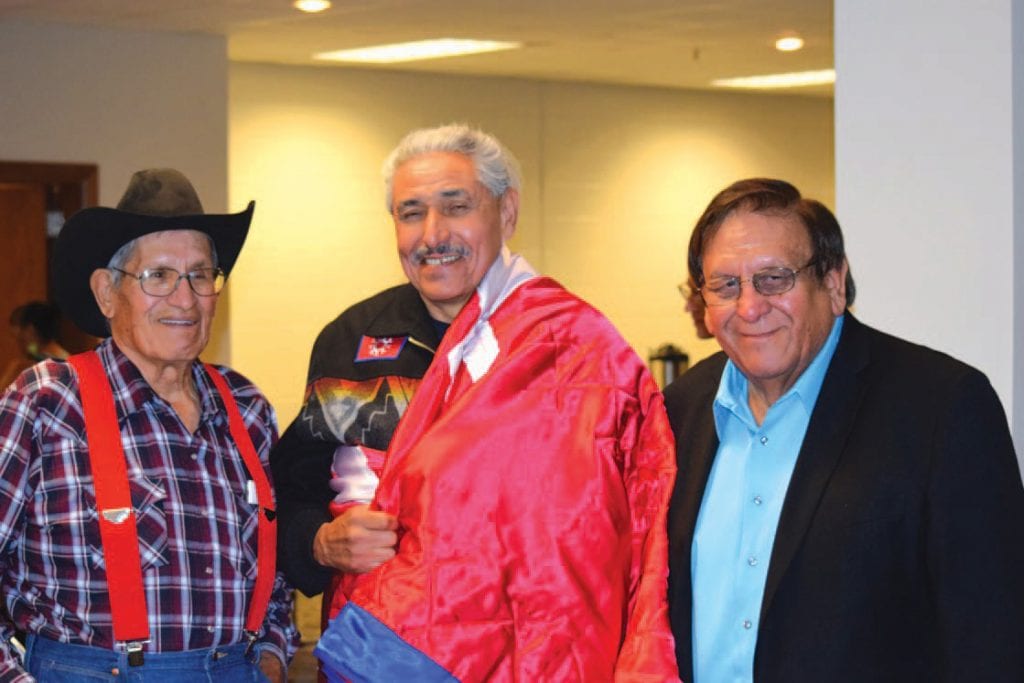 The three main Oglalas behind the success of the Mni Wiconi water project: (left to right) Paul Little, Frank Means and Mario Gonzalez.

PRAIRIE WIND CASINO –– Aside from an occasional wisecrack, Frank “Pope” Means didn’t have a lot to say at his official retirement luncheon, last Friday at the Prairie Wind Casino Conference Room. While people ate a prime rib/or chicken lunch, in a room chock full of Oglalas and other local dignitaries, the people who knew Frank best, took turns at the podium, and while they all threatened to “roast” him, mostly they painted a picture of a singular character doing his best to bring clean water to the remotest parts of the Pine Ridge Reservation.

That wasn’t all Frank Means did, but it was his major accomplishment, and it was the centerpiece in a list of accomplishments from an official proclamation issued by OST president Scott Weston, and read to the audience by councilman James Cross.

The proclamation said: “… we recognize the dedication and many contributions that Frank ‘Popo’ Means has made to the Oglala Lakota Tribe…especially his outstanding work in completing the construction of the Oglala Sioux Rural Water Supply System core pipeline and reservation water delivery system…”

Listed were his various stints on the tribal council from 1984-2002, his work as OST Economic and Business Development Chairman for most of the years between 1986-2002. The list went on and on, no less than eighteen other accomplishments, and nine awards and certificates, even an appreciation award from the Rosebud Sioux Tribe issued in 1996.

When Frank finally did speak, he summed up his forty-year career of public service with simple but earnest words: “I start every day off praying. I have to believe in something. I don’t believe no human being should ever judge another human being, because on that day… we’ll all be judged.”

Then he paused, and concluded, “I’m retired. Give me my senior discount.”

There aren’t many Lakota who can make it through any given day without joking about some part of their life, usually parts as difficult and demanding as life can make them, and Frank Means is no exception.

Cross opened the podium session by declaring, because of Frank, “our people have good, safe drinking water.”

OST secretary Donna Solomon added: “I was really appreciative of his leadership and guidance. He really helped us organize and bring our council together. He was one that really stepped up and just came through with a lot for our tribe.”

One of the two main people who worked with Frank Means to make Mni Wiconi a reality was tribal attorney Mario Gonzalez, and he spoke next: “My mother and Frank’s mother were best friends in high school. First time I met Frank, I stepped into their house and there was this little kid coming down the bannister right at me. Over the years, I worked with Frank on a lot of projects. Frank deserves a lot of credit for closing (the Mni Wiconi) project out. This water project is going to do a lot of good for our people, and Frank left quite a legacy.”

Paul Little spent decades working with Frank, mostly on Mni Wiconi, and he said “This was a people’s project, that’s what Pope used to call it. (He would say), ‘I hope someday they’ll never have to pay for water.’”

Duane Brewer then took the podium and said, “The Bureau of Reclamations gave Frank and I one of the highest awards no other tribal members have ever got.” Duane said when they went to collect their awards, “I’ll tell you what Frank had on, he had on a Mickey Mouse T-Shirt!”

After the laughter died down, Brewer said, “I will tell you another story…”

“No, this is a good story!” Brewer said. It was a good story, about how a man finally got clean drinking water to his house and said, “I’m gonna see a water line to my house before I see the Black Hills money.”

The proclamation from President Weston ended with, “…pursuant to the authority vested in me as Tribal President, I do hereby proclaim July 6, 2017, as Frank “Popo” Means Day on the Pine Ridge Indian Reservation.”

A final word about Mni Wiconi. This was a water project, conceived, pursued, constructed and closed out by Oglalas, mostly three men: Paul Little, Mario Gonzalez, and the Project Director, Frank “Pope” Means. Without this project, Prairie Wind would have no water, the new nursing home south of White Clay would have no water. The hard work, dedication, cooperation and vision it took to pull off Mni Wiconi demanded more than one man could contribute, but those contributions would have never resulted in outcome, had it not been for the leadership Frank “Pope” Means brought to the project.