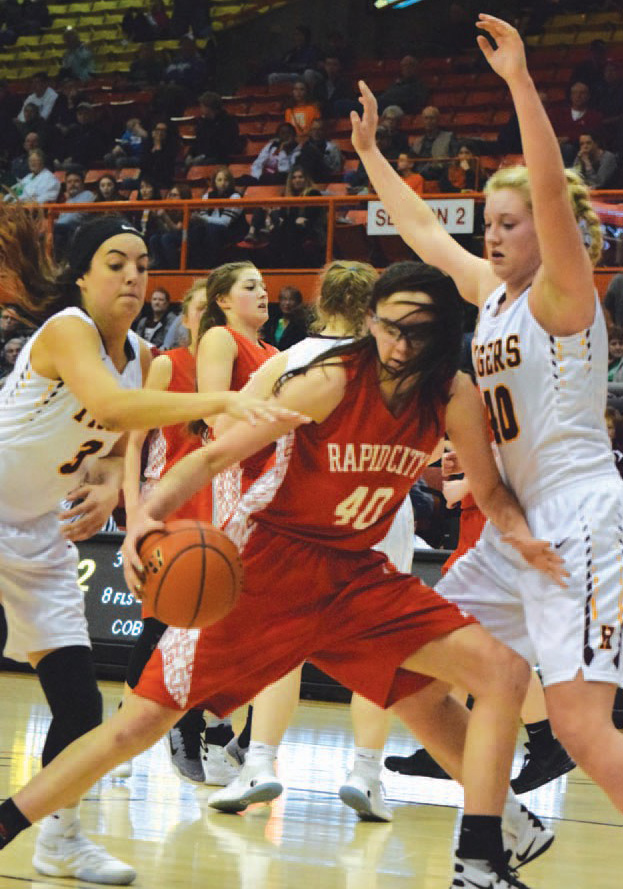 RAPID CITY — After getting a huge win over crosstown rival Rapid City Stevens, 60-49, in the opening round, the Rapid City Central Lady Cobblers were tripped up by Harrisburg, 49-44, and then lost big to Aberdeen Central, 60-34, to place fourth at the 2017 State AA Basketball Tournament, last Saturday at the Rushmore Plaza Civic Center.

RC Central lost to Stevens in District play, and had to defeat a game but hapless Mitchell squad to make State. At State, they were somehow rated #4, and Stevens #5, even though their records were similar and Stevens had beaten them two out of three this year. But the power point seeding proved accurate.

For an opening round game, the Cobbler-Raider match-up meant much more to local fans, and proved to be the most exciting and raucous game of the tournament. The Lady Raiders came out firing on all cylinders, filled with confidence, having beaten Central, 52-45, just a week earlier, and when Hanna Van- Derwerff fired a cross-court pass to wide-open Kyah Watson, she drained a three, and Stevens led 11-4. They expanded that lead to 17-6, before Mya Jones was fouled by Mya Hendry in the paint, and hit both free throws to make it, 17-8, Stevens, after a quarter of play. 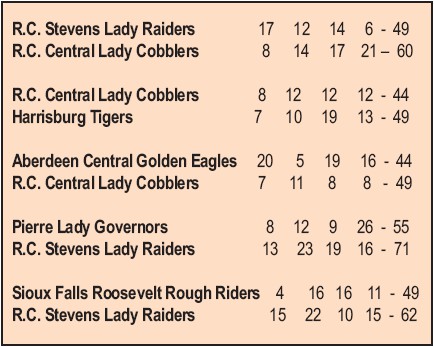 Jones battled hard in the lane all game long, utilizing her 6-0 height to its full advantage, but she did not get a full head of steam up until the second half, and Central was only able to cut the Stevens lead by just two before halftime, 29-22.

Early in the third, Hendry blocked Jones, but Jones snatched the offensive rebound for a put-back, making it 31-26, Stevens. Watson then hit another three, came back the next possession with two free throws, and Stevens had a double digit lead again, 36- 26. No one realized it at the time, but Stevens had reached their high water mark.

Jones scored on a nice floater, 36-28, sister Juneau Jones found Bailey Johnson open with a pass, and it was 36-30. Juneau Jones then stole the ball just before a TV timeout, 4:46 remaining in the third.

Back on the floor, Karli O’Brien was fouled and sank both free throws, 36-32, and then Mya Jones stole the ball and scored on a lay-up, 36-34, Stevens. Elizabeth Schaefer made a free throw for Stevens, setting the stage for Bailey Johnson’s huge three, which tied it all up, 37-37. The Cobbler faithful exploded with the biggest outburst of the entire tournament.

Clearly rattled, Stevens gave up a steal to Abby Johnson, she went to the line, made one of two free throws, and Central led for the first time, 38-37. Normally, Stevens should have had a home-court advantage, but when the opponent has a high school right across the street, that translates to a disadvantage, and the Cobbler fans were pumping up the Cobbler players.

Head Coach Michael Brooks called a time-out, to regroup his Lady Raiders. It worked. Hendry got in the crowded paint, and in one of the most athletic displays of determined effort in the tournament, fought the ball up and through the hoop, and Stevens was back on top, 40- 39. After Juneau Jones fired an errant pass out of bounds, the sleek and aggressive freshman, Watson, found an open spot beyond the arc and hit a three, and Stevens ended the third quarter up, 43-39.

Abby Johnson opened the final quarter by making two free throws. After a few minutes of scoreless basketball, Abby Johnson broke the drought with a three, putting Central back on top, 44-43. They would not trail again.

Another TV time-out, 4:42 left to play. Central Head Coach Kraig Blomme pulled a chair from his bench row and sat down surrounded on all sides by his charges.

“Expect them to pick up the full court pressure,” Blomme said. He well recalled his previous losses to Stevens this year, especially the first lost, a game Central controlled the first half. But Stevens came after O’Brien, pressuring her relentlessly, breaking up the Cobbler attack, utilizing their aggressive, cat-quick guards. There was no reason not to expect more of same.

Before he sent them back on the floor, Blomme said, “Catch your breath now, battle ‘em every possession.” They would do exactly that.

O’Brien repeatedly brought the ball up court in those final four minutes, but the Stevens pressure never came. Central built their lead to 53-45, and then Blomme called time-out. Back on the court, VanDerWerff missed a shot, Abby Johnson rebounded, and with the 35- second shot clock ticking down, the crowd chanting 8- 7-6-5-4-3…Johnson, milking the moment for every ounce of drama, took the buzzer-beating shot and hit a three, putting Central up by ten, 55- 45, under a minute to play.

Mya Jones led all scorers with 16 points. She had 6 rebounds. Abby Johnson had 13 points and 7 rebounds. Central outshot Stevens 43% to 33%. Central had 12 more points in free throws but this was because Stevens was forced to foul repeatedly in the final minute. Watson led Stevens with 12 points. Julia Haefs added 10 points and 5 rebounds for the Lady Raiders.

“I give a lot of credit to the girls,” Blomme said after the game. “We knew it was going to be a dogfight the whole way through. Mya (Jones) had a great night, she was very aggressive, showed the athleticism she has.”

Blomme talked about his second half comeback: “At half-time we told them when you get that contact, you’ve got to drive through it, to get to the basket. In the second half, switching from man to that zone and full court pressure, really changed the game. We had to come out (that second half) with more energy and fire. At the beginning we were a little bit nervous, because they’d beaten us twice.”

RAPID CITY — Sometimes a strategy that works in one game, can backfire diametrically in another, and that was certainly the case in RC Central’s 49-44 second round loss to #1 seed Harrisburg at the State AA tournament Friday afternoon.

RC Central Head Coach Kraig Blomme had switched from man-to-man defense to zone, sparking a second half comeback win over arch-rival RC Stevens the day before. Against Harrisburg, Central led 20- 17 at the half, a lead largely built on man defense, but after Central switched to zone in the third, Harrisburg outscored Central, 19-12, taking a 36-32 lead heading into the final period.

At that point the referee whistles went crazy for Harrisburg, calling five fouls to zero against Central, putting Harrisburg into the one-and-one, and giving them a 38-32 lead. Central took over three minutes to score, which they did when Karli O’Brien’s pass found Maddison Sullivan under the basket, for a bucket, 38-34.

Abby Johnson’s three with no time left in the game made the score, 49- 44, but if you subtract that bucket, Harrisburg was able to handcuff the Lady Cobbler offense, limiting them to just 9 points in the fourth quarter, and outscoring them overall from the free throw line by 10 points, within the margin of victory.

Both teams were about even in rebounds, 36-33, Harrisburg, but Central took two more shots and led in shooting percentage, 36% to 30%, and led from beyond the arc, 33% to 20%. It was a tough loss, with no Lady Cobbler able to step up and deliver a double-digit performance except Sullivan with 11 points. Sullivan also had 4 assists. Sydney Halling, a 5-9 junior, had an outstanding game for Harrisburg, scoring 27 points and pulling down 8 boards. Jeniah Ugofsky added 11 points, and 6-1 senior Sammi Slaughter also had 8 rebounds.

In the third place game, RC Central came out flat and uninspired, went down 20-7 in the first quarter, and were outscored 35-16 in the second half. Abby Johnson had a good game with 15 points, and Juneau Jones had 6 rebounds, but the rest of the team were extremely quiet. Understandable, given the tough loss to Harrisburg the day before, and having lost to Aberdeen Central earlier this season by 18 points.

RAPID CITY — Back in February the girls from RC Stevens looked like a world beater, having twice beaten eventual 2017 State AA champion SF O’Gorman, 49-35, and 45-43. But then came a disastrous road trip to Sioux Falls, and the loss of 4 of their last 5 regular-season ball games. They rebounded with post-season wins over Sturgis and RC Central to make state, but lost in the first round to RC Central.

Instead of rolling over and playing out the string, Head Coach Michael Brooks got his high energy charges back in their old form, and they beat Pierre, 71-55, and then took the fifth place trophy by downing SF Roosevelt, 62-49.

The reason for the two victories was simple—they outshot, outrebounded and out-hustled their opponents convincingly.

A curious feature of the change from earlier in the season was the play of senior standouts Hanna VanDerWerff and Ally Riddle. VanDerWerff started the year as the defacto captain and best player for a very good team, routinely scoring in double figures and displaying basketball smarts and resilience beyond her high school years. She would average 3 points a game at State AA. Riddle is a born competitor, hard-nosed and floor savvy, but her minutes dwindled to basically nothing by the final game and she managed 4 points for the tournament. It is hard to recall a season where two players as gifted, and fundamentally important to the team, ostensibly still healthy and on the floor, disappeared from relevance so completely.

In the Pierre victory, freshman sensation Kyah Watson led RC Stevens with 14 points. Emma Burns had 12 points, and Elizabeth Schaefer 11. Mya Hendry had 8 points and a whopping 14 rebounds. Emily Mikkelsen, a 5-5 sophomore guard, had 13 points for Pierre. Mack Rath, another sophomore, had 11 points and 5 rebounds. The Lady Governors should be even tougher next season.

In the fifth place game victory over Sioux Falls Roosevelt, Stevens had four scorers in double figures. Freshman Watson again led all scorers with 17 points. Watson also had 7 assists and 6 rebounds. Hendry had 14 points and 6 rebounds. Burns had 12 points, and Julia Haefs had 10. Tahia Mitzel had 11 points for SF Roosevelt.