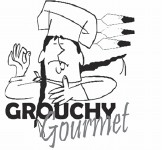 Above all else Grouchy hates to give a bad review to a restaurant that is new or has just changed hands, but gourmet has to be honest.

The Mexican restaurant used to be called Ixtaca and under the new management its name was changed to La Costa. It is located at 603 Omaha St. in the old building where Remington’s used to be located.

Grouchy took a guest there because it had been a few months since they had been there when it was Ixtaca’s. The décor’ is not at all attractive and there was crumbs and other bits of debris on the floor near the booth where they were seated. When the waiter appeared and asked what they wanted to drink Grouchy’s guest asked for a Margarita. The waiter said, “We do not have a liquor license yet so all we have is soft drinks, tea or coffee.” Ok we can live with that. And then he took our order. Grouchy’s guest ordered a Chili Relleno and a Tamale. Grouchy ordered a taco and enchilada, and each meal came with Spanish rice and frijoles.

Grouchy’s guest, a long time aficionado of Mexican food having lived in New Mexico for more than 20 years, was puzzled and curious about the plate that the waiter set in front of her. Oh yes, they did bring chips and dip before the meal and the red chili dip was loaded with cilantro and the bean dip was so watery it was flavorless.

She searched her plate trying to find the Chili Relleno to no avail. What she found was a green piece of chili with a runny egg on it. Her tamale was not the kind of tamale she was used to by any means and it was difficult to tell if it was really a tamale.

Grouchy was also an old hand at Mexican food and the taco and enchilada put on the plate soaking in the wet frijoles were not up to snuff by any stretch of imagination. Grouchy was still recovering from the chips and dip and to be hit with another mess was overwhelming.

Both ordered iced tea since there were not margaritas and the watery tea was $2.75 per glass. All in all the meal cost them $15.00 each for a total of $30.00. And to put an asterisk on an already dubious day, the waiter lost their receipt and had to write another on a piece of paper.

Like Grouchy said, slamming a new restaurant in no fun, but maybe this review will push them to clean up the place and do something about their food. Needless to say, Grouchy will not be returning to La Costa anytime soon.