He uses music to heal from adoption trauma 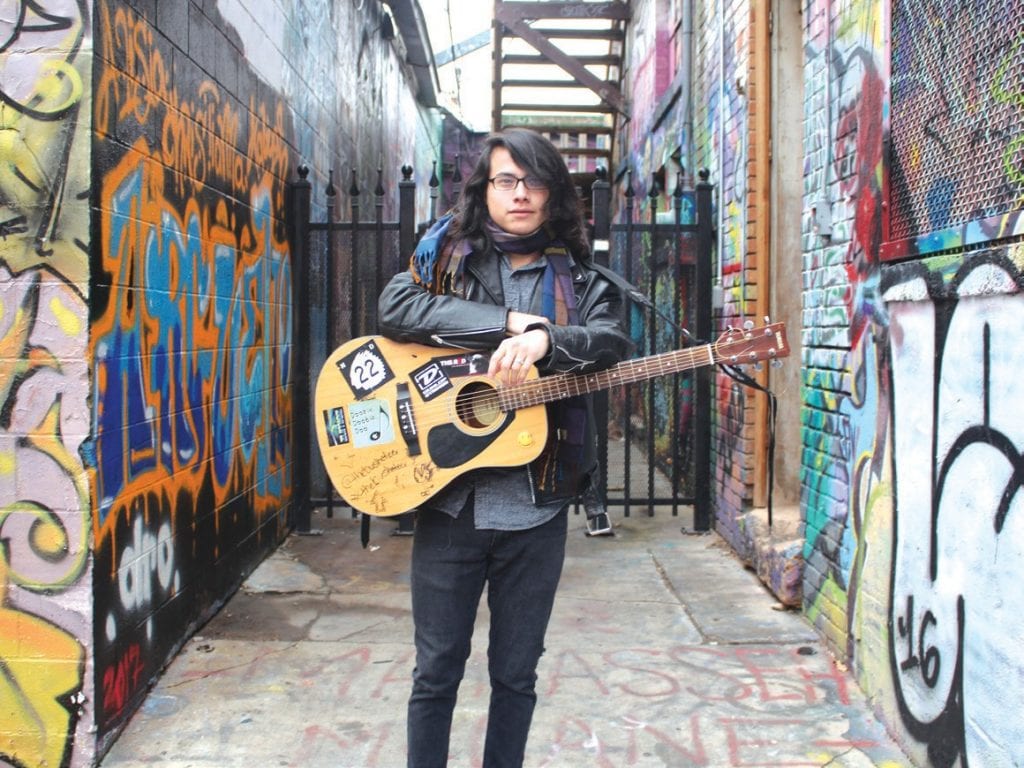 Actor and musician, Bert Malcom, in Art Alley in downtown Rapid City. He chose this location as the art and vibe give him inspiration and solace.

RAPID CITY — As a child in the foster care system, Alberto “Bert” Malcom, 21, was bounced from family to family across South Dakota before being adopted to a family in Nebraska.

This constant shuffling created an unsettled spirit in this Lakota man which has brought the guitar player’s life in a full circle; from adoption abuse and prescription drug use to being an expectant father safely back in the Black Hills.

Born Alberto James Dismounts Thrice to parents Deborah Dismounts Thrice and Frank Lucas, Malcom was adopted to Kent and Lupe Malcom; a non-Native family from Nebraska at the age of 8 years old. He recently moved back to Rapid City.

Until then he was in the foster care system, living in over ten homes in Wall, Spearfish, Belle Fourche and others towns he can’t remember. “I remember a lot of different situations. I felt like I didn’t belong,” said Malcom.

After being adopted, the young musician said his home was physically comfortable, but emotionally empty in many ways. “The Malcom’s are really well situated people. They had a really big house and they could provide everything. They gave me a really decorated place to live,” he said.

The adoption process was slow and detailed for the Malcom’s. Several things had come up during the adoption and throughout this arduous process, Malcom had been in the home with a woman whom he claims never really wanted him there. “When we were going up to the court, Lupe grabbed me by the arm and said ‘I don’t care what you say, but you’re going to get adopted today. It’s not your choice’,” Malcom said during his downtown Rapid City interview.

“After I was adopted, I feel like the walls fell down. My mother disclosed a lot to me. She didn’t want me. The only person really there for me was my adopted father (Kent). Through him, I learned the morals that I still carry today,” claims Malcom.

Of his adopted mother, Malcom said her abuse was never physical, but intimidation, blaming and shaming was her tool of abuse. “She (Lupe) wasn’t physically abusive. She was very emotionally abusive and verbally violent,” said the guitar player and actor.

Alberto Malcom was put in the foster care system with his siblings at the same time. All five were separately adopted. “It was very lonely to be honest. At first they told me I would have all of my siblings with me,” said Malcom.

When two of his younger siblings came to stay for a short period, his adopted mother, “Lupe instigated a lot of things amongst us kids. She was just always fighting with us and arguing with us. She treated us like second class to the rest of the family.”

Malcom says that part of his survival techniques in various homes was to be silent about the abuse or goings-on of certain homes and individuals, in fear that he would be taken and placed elsewhere. This created a fear of separation which he carries to this day.

A turning point came at the age of 17 for Malcom. After feeling emotionally absent and unwelcomed for many years, Malcom says he had given up on trying to be with the Malcom’s. “I didn’t feel like I was welcome anywhere. I never really felt like I had a home. I never felt like I was wanted,” he said.

Constant moving and adapting to new environments was traumatic for Malcom. “The horror of foster kids going through a transition into communities is the blatant racism. People would walk up to me and make remarks,” he said of his homes in South Dakota and Nebraska.

In Lincoln, Neb. Malcom was exposed to other children in the foster care system and others who were adopted as well. “There were all these adopted Lakota kids and they were just as distant from the culture as I was,” said Malcom.

Having Jewish heritage, Malcom would go to temple in Nebraska. There, a Jewish woman was teaching the Lakota language to Lakota kids and families. “It was strange, but she was teaching it,” he said laughingly.

At age 17, Malcom became addicted and began to abuse the prescription medications administered to him to treat his ADHD. This addiction began to change his behavior as he started to behave erratically. “I was starting to get crazy. I would skip all my classes and I would go into the music room,” he said.

This is when Malcom began to use music to soothe his chaotic soul. “I would sit in a piano room and I would play piano and guitar. I would play anything, my hands wouldn’t stop moving,” he said of his need to be constantly moving physically.

Upon high school graduation, his adopted father had asked if he would like to return to South Dakota to reunite with his biological family. It was Kent who was the only person he was emotionally attached to in his home.

“When the school year ended, he bought me a bus ticket back to South Dakota. He wanted me to take my guitar and go find my roots,” he said. His adopted mother only waved goodbye as he walked out of the home he had lived in for nearly ten years. No hugs. No love.

Kent had taken him to the Greyhound bus depot for his departure. “I just gave him a hug and told him I’d be back someday. I got in the bus and waved at him. I haven’t been back since,” said Malcom.

Malcom was picked up by his grandmother, brother and an uncle. Immediately, he recognized how much he had changed during his foster and adoption care. “I remember hearing people talk. I sounded super Nebraskan. I remember hearing how people talked on the rez,” he said of the comforting sounds of Lakota culture. “It reminded me a lot of when I was little. It felt home again.

His return was not completely what he had expected. He said it felt like he was “chasing ghosts” all these years, as his family in South Dakota had changed since he left as a small boy. “My family was in shambles. There was no connectedness anymore,” he said.

Sadly, his grandmother had passed away soon after his return. His constant search for a home continued. “I wanted to find relatives that were glad I was back, so I just kept looking,” said Malcom.

Often times, when Lakota people spend time away from their people, they are treated by outsiders when they come home. “I feel like I was treated ignorant by people who have been here a lot longer than me,” he said.

Malcom’s story is one of thousands of adopted Lakota children who have no choice but to adapt to the life they’ve been given. This shifting of homes and readjustment to various familial structures left him alone in his thoughts for long periods at a time. This is where his creative spirit was born.

He would like to get his education and become a teacher in a middle school or high school someday. But first, he wants to continue preparing for the birth of first child. “I’m expecting a baby girl, Sophia Amore Marie. She will go by my wife’s name, I want to change my name but not sure to what yet,” said Malcom.

He would like to teach acting and performance. “I used to be in an acting program in Nebraska. We taught about anti-bullying and what to do when you’re being assaulted, like sexually assaulted at home. We had a show called “Touch”. It taught the difference between positive touch and negative touch and how to get over situations like that.”

Through performance, he hopes to teach children to “Let it all go”.

Today, Alberto “Bert” Malcom plays guitar, auditions for gigs and movies. Most recently, he auditioned for American Idol in Rapid City and played a role in the short film “The People”.

He also created a song for the soundtrack titled “On The Edge” which can be found on YouTube. “I had already been in the film before the song had been written. They wanted me to write a song for the film. It took me a long time to write it. I wrote it inside my best friend’s house laying down in his kitchen,” he said with a smile.

Listening to the heartbeat of his unborn daughter is like the Lakota drum he heard when returning to South Dakota for the first time. This is home for him and it’s creating vision, purpose and belonging.

“Hearing her on the ultra sound is waking something up in me, something that has never been there before. I feel like I can do anything. I feel like I want to drop music, but my wife (Madonna Rose Conca) said she would break up with me if I did. That’s how much she believes in me,” closed Alberto “Bert” Malcom.