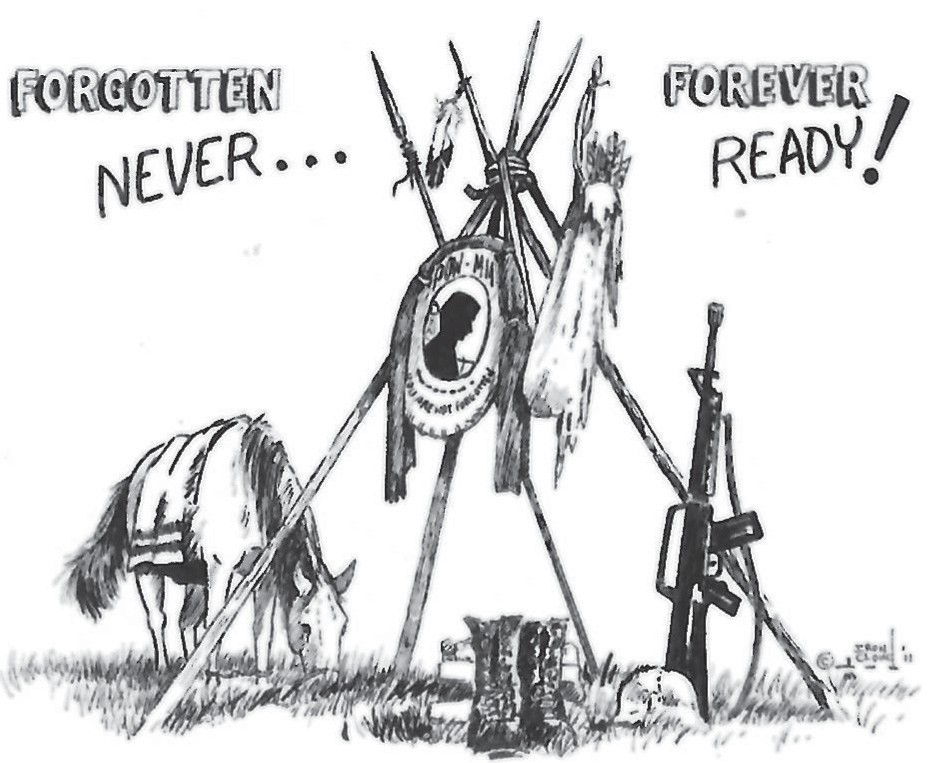 When the veterans of the many wars came home to the United States and to their home Indian reservations they were looked upon with pride and honored. Ceremonies were often held to honor them.

Clement Crazy Thunder, a United States Marine, came home on leave during World War II and met up with an old friend, Hobart Keith, United States Navy, and they bought some large containers of ice cream and took them to Holy Rosary Mission near Pine Ridge (now Red Cloud Indian School) where both had been former students. They lowered the tailgate on their truck and lined up all of the boys and scooped out ice cream on to cones. All of the boys got ice cream that day thanks to the Marines and the Navy.

Crazy Thunder reported back to his base and was sent by troop ship to Iwo Jima where he was killed. Keith came home to Pine Ridge and became a great artist and eventually the Chief Judge of the Oglala Sioux Tribe.

Duane Brewer, who died last week, came home from Vietnam and like many of his fellow veterans from that war had a hard time adjusting to civilian life, but he did and went on to serve on the Tribal Council of the Oglala Sioux Tribe.

So many of the Vietnam vets came home and used their GI Bill to get an education and then went to work on the reservation as teachers and school principals, GI’s like the Conroy brothers and Bryan Brewer.

.Enos Poor Bear, the man who helped design the flag of the Oglala Sioux Tribe when he served as President of the Tribe, was a decorated U. S. Army veteran of World War II.

It wasn’t just the Indian men who utilized their service years to get an education and them come home and work for the betterment of their people. Many Lakota women did the same. Marcella LeBeau, who is now in her 90s, was a combat nurse during World War II in Europe and came home to continue to serve her people as a professional nurse working for the Indian Health Service.

Many were asked why they served. They were asked this because the very government they fought for had a terrible history of dealing with the rights of the Indian people. Almost all replied that they were warriors and as such felt it was their duty to serve.

And then they set about trying to remedy some of the misery and injustices heaped upon the Indian by the very government they had just served.

And so on this special day that is set aside to honor America’s veterans, we offer a special salute to those brave Native Americans who proudly served, many giving up their lives in defense of America because this land was also their land. No ethnic minority served in greater numbers.

As the U. S. Marines so proudly say, “Semper Fi – Always Faithful.”

(The Editorial Board of Native Sun News Today can be reached at nativesunnews. today)