How many council reps have overspent their travel allowance?

OST Treasurer’s report should be available to all tribal members 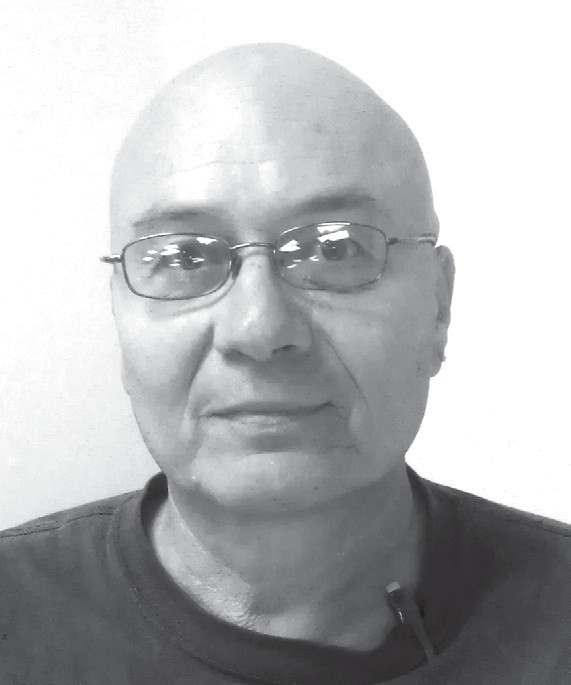 Most of the Oglala Nation is always interested in the tribal budget and spending. I’m going to write this article on the 2017 year end spending for the Oglala Sioux Tribe.

The Oglala Treasurer’s report has for the most part, been a closely guarded secret that only gets presented to tribal council members each month where the treasurer is constitutionally bound to give their report. When the general public asks for it, they usually get turned down. When the treasurer presents the report, it is also announced on the local radio station but none of the intricate details in that document are ever discussed. So, it is very important to use the media and specifically NATIVE SUN NEWS to present this. Additionally, I’ve never given up any of my resources which in turn increases the trust in terms of the people who provide me with information. For those of you who have important issues to report and if you have legitimate documents, I will screen them for validity, wide public interest, and probably write about it, but no guarantees that it will get published, that’s up to the editor. 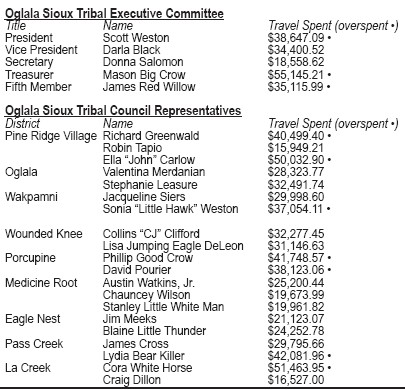 In reference to the Oglala Constitution and in the amendments part, under Article IV-Salaries, Section 1. “The salaries and expense payments of the councilmen and other officers of the Oglala Sioux Tribe may be paid out of available funds of the tribe in accordance with ordinances duly enacted, provided that no council shall enact any ordinance increasing the salaries or per diem expense payments of councilmen during the existing term of office.”

This seems clear and understandable that the council members and executive committee members are all constitutionally prohibited from increasing their per diem aka travel expense payments during an existing term of office. I’m not going to pick on any individual or group of council or executive committee members, I am just pointing out the facts based on the information that I have obtained from the treasurer’s report and am informing the Oyate of these findings so they can police their respective council representatives themselves.

The Oglala tribal council and executive committee members are limited to spend $35,000.00 per year in travel expenses. There are 25 representatives who qualify for this type of spending which equals a total of $875,000.00 in annual travel expenses for that group. That equates to a lot of goofing off. Those who exceed that limit are actually violating the Oglala Constitution and could be subject to removal for cause. However, it is nearly impossible to remove them because they still didn’t activate the Ethics Board.

In one of their many meetings, the treasurer was heard to say that the council must “police themselves” when it comes to travel expenses. And concerning the budget, that money “only exists on paper.” I can see that the treasurer is partially correct in the first comment because the council took an oath of office to uphold the constitution and they should in fact, be policing themselves. But when they can’t seem to control their spending and go beyond the limit that is authorized, then it is up to the treasurer to deny travel if there is no money left. The treasurer has ultimate control of tribal funds and should step in to stop constitutional violations concerning over spending of travel.

The second statement is understandable as well where money only exists on paper. The end of the year expenses or budget for 2017 reveals that in the general fund, the treasurer budgeted $4,669,000.00 in revenues but also budgeted $12,909,723.27 in expenditures. When they use up the revenue budget and start chipping away at the “only exist on paper” expense budget, they are effectively spending money and does not exist other than on some record of worthless ink and paper. Thus, the treasurer, and bless his heart for trying, is absolutely correct when he states that the money only exists on paper. Although it is said that the most powerful position within the tribe is that of the treasurer, the statement is not exactly correct. If the treasurer does not conform with tribal councils wishes, watch how fast they remove the treasurer. To the treasures credit, they only spent $9,733,918.77 of their almost 13 million dollar expenditure in the general fund budget. However, they still spent about 105% more than they projected for revenues. I think the statement of “policing themselves” doesn’t go very far as you will see in the chart below.

The treasurers report uses codes to identify the budgetary spending of the tribal council members. CL-1 and CL-2 are used for every district except Pine Ridge and Medicine Root who have CL-3. I’m going to translate the codes into names. Keep in mind that anyone on the list below who have gone beyond the allocated $35,000.00 for travel expenses, is in violation of our tribal constitution and the reader can reference the language of the constitution in the amendments of Article IV Salaries, Section 1, where I wrote that out in its entirety above.

When the election cycle comes around again, think about this article and think about the wild spending and subsequent constitutional violations that have occurred before you place that check mark next to your candidate. I hate to disagree with my youngest and smartest baby brother on constitutional reform (or on any other subject for that matter) because he can whip up an argument that will make a person’s head spin and if a person doesn’t pay attention, he can intellectually lose you very easily. He doesn’t do it on purpose, he’s just way smarter than most people. But I still have to stress the importance of constitutional reform in an area that is related to this article where there should be some really tough constitutional measures with teeth that insures leadership remains accountable.

Although the chart below proves that a percentage of leaders are unaccountable even to themselves, what can be done about it? The constitution proves that they are in violation, but it does not provide sanctions or “teeth” to enforce accountability and therefore, the leadership absolutely knows that they can spend, spend, spend, and get away with it. Nobody is policing them as the treasurer suggests. Remember, they are only allowed $35,000.00 per year in travel expenses and the data is for the end of the year in 2017.

There you have it. This info is not meant for anybody to start throwing stones at the council representatives, but you should at the very least start asking some heavy questions as to why some of them overspent and violated the constitution in that process of spending. And you should think very hard about who you are going to trust in those leadership positions during the next round of voting. If I was fortunate enough to become a council representative, I would focus on the budget and balancing it, and further focus on the economy to entice businesses to set up on the reservation by relaxing the rules to attract them. However, the pen is mightier than the sword, a sober Indian is a dangerous Indian and knowledge is power. Go figure.

The tribal constitution is a valuable tool that we have to help keep a balance of power. For the most part, everything is there and in my personal opinion, not to undermine my youngest brother, if we had a distinct and enforceable separation of powers, this may be all that is needed to keep the legislative, executive and judiciary branches of tribal government in line when needed. Especially when we are trying to control the travel, overall budget and expenditures that keep us in debt.