Hypocrisy abounds in treatment of Kaepernick 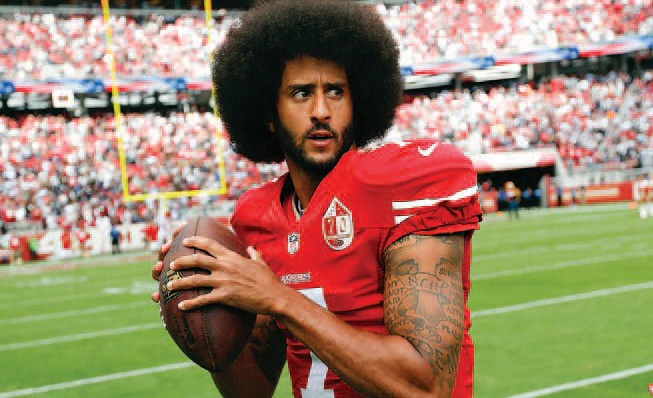 Welcome NFL fans, as the league’s Organized Team Activities have ended, and teams are preparing for training camp. You can feel the excitement in the air as fans gather around the practice field eagerly awaiting preseason to begin.

“Commander Timmy, go ahead and give us the latest rundown of the news,” stated the Captain.

“Aye-aye, sir,” responded the Commander. The Oakland Raiders are attempting to build their franchise around the talents of quarterback Derek Carr; he is expected to be the highest paid quarterback in the league at $25 million per year, as deliberations continue.

From football to wrestling goes former Steeler De Angelo Williams. An eleven year veteran in the league, he will now be featured on pay-per-view in Orlando, Florida on Slammaversary XV.

Not so good news for Saints DT Nick Fairley, whose heart scan revealed he had an enlarged heart which could potentially end his career. Fairley is now seeking a third opinion concerning his heart. Patriots WR Julian Edleman agreed to a multi-year contract extension. Speaking of extensions, Detroit Lions WR Golden Tate is also seeking a contract extension.

However, the priority of the Lions right now is to secure the extension of his teammate. QB Matt Stafford just has two years left on a $6 million dollar contract.

The NFL is quickly becoming the “No Fun League,” as the Celebration Police will be evaluating 2017 rule changes. One thing that will not be allowed is the shooting of the bow and arrows by Washington CB Josh Norman.

“It is somewhat hypocritical that the league will not do away with the mascot, but won’t allow that,” stated our guru Timmy.

Sometimes working out on your own can lead to mishaps, as Broncos LB Shaquille Barrett injured his hip, and is expected to miss the training camp.

In New York, the Jets have released WR Eric Decker due to a torn rotator cuff and hip problems. However, Decker has signed a one-year deal with the Tennessee Titans, providing QB Marcus Mariota with an alternate target this season. Defensive End Myles Garrett is expected to return to training camp after suffering a lateral foot sprain.

“Excellent as always Commander,” said Captain Kirk. “I will continue with this week’s news.”

Sometimes standing for your rights can leave you standing all alone, ask former Forty Niner QB Colin Kaepernick. He is having a little trouble landing on a team now that he is a free agent. You will recall, Kaepernick’s controversial stance on not standing for the National Anthem. Last summer, Kaepernick protest drew national attention, as soaring police brutality towards African Americans was much in the news. In the wake of police shooting unarmed citizens across the country, Kaepernick took it upon himself to do something about it, drawing fire from the media and fans who thought he was disrespecting the military by his actions.

“I am not disrespecting the military,’ stated Kaepernick, “Many military members understand my plight.”

Kaepernick was even told by some members of the media that he should leave the country if he doesn’t like it.

“I think it is a little unfair,” stated the Captain, “Many other players also stood with him at the time but remained with their teams.”

“Many times you stand up for what you think is right,” the Captain continued, “and take the heat and criticism and years later you are considered a hero for your actions.”

Ask 200 meter Gold Medalist Tommie Smith, and Bronze Medalist John Carlos, who raised their fists with black leather gloves giving honor to the Black Panther Party in the 1968 Olympics. The Black Panthers were labeled by FBI director James Edgar Hoover as a threat to national security. The Party’s mission was to feed and clothe citizens, and provide them an education without government assistance. Smith and Carlos had their medals taken away and never returned.

Our society has a way of demonizing individuals who stand up against the status quo to protect their rights. This is kind of confusing, given we ostensibly live in a land where your free speech is constitutionally protected. America is great because you have the right say and write how you feel. It seems the NFL has no tolerance for controversial political statements, which is explains why teams are passing on Kaepernick. If that is the case, why are the Miami Dolphins having a voter Registration Drive? In essence, the NFL is comprised of over 70% African American players, it was only a matter of time that these players would show their principled discontent with mainstream attitude and treatment towards Black citizens.

Many fans say Kaepernick makes millions of dollars per year, why should he be unhappy. Even though he was adopted and raised by a Caucasian family, his brothers suffer mistreatment at the hands of law enforcement officials.

Kaepernick has always been a rebel in this sense. In 2014, he was called out for wearing pink headphones that were not Bose, a corporate brand of the NFL. When criticized, Kaepernick stated that the pink headphones he was wearing were to honor National Breast Cancer Awareness Month, a month in which the league decorates it players with pink cleats and flags.

In a nutshell, if you review the history of the National Anthem written by Francis Scott Key, African Americans were slaves fighting on the side of the British trying to win their freedom. President Trump, while running for office, criticized Kaepernick, yet he himself had to be prodded by his wife to place his hand over his heart during the singing of the Anthem.