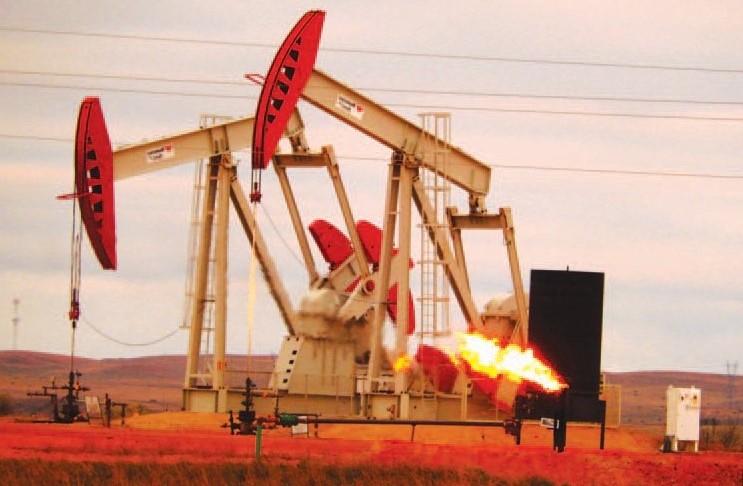 This oil rig on the Ft. Berthold Indian Reservation demonstrates how flaring on federal and Indian lands from 2009 to 2014 was responsible for the loss of enough gas to meet the demand of about 5.1 million households for a year.

MANDAREE, N.D. –– While members of Ft. Berthold Protectors of Water and Earth Rights, or POWER, prepared to testify at a March 3 hearing about gas flaring in oil fracking operations on federal and tribal lands, they urged the public to send comments to strengthen regulations.

The hearing tops off a series of four that the U.S. Interior Department’s Bureau of Land Management, or BLM, has scheduled across Indian country because it is “proposing new regulations to reduce waste of natural gas from venting, flaring, and leaks during oil and natural gas production activities on onshore federal and Indian leases.”

However, the group said in a Feb. 23 written statement, the proposal would continue to allow the current practice of exempting oil companies from paying royalties to individual tribal mineral owners and tribal governments for flared gas anytime an operator claims it is forced to halt production to comply with rules.

“The federal government, through BLM, has been subsidizing the oil industry through royalty-free natural gas flaring,” it said. “That practice must end.”

Mandaree is the segment of the Ft. Berthold Indian Reservation known for extracting the most frack oil in the Bakken Formation.

The regulations aim to clarify when produced gas lost through venting, flaring, or leaks is subject to royalties, as well as when oil and gas production used on site would be royalty-free, according to the BLM. The deadline for all comments is April 8.

Existing regulations date back to 1979, before the method of hydraulic fracturing, or fracking, came to dominate production processes in the U.S. oil and gas fields.

POWER participant Lisa DeVille, who is a board director of the Western Organization of Resource Councils, or WORC, told the Native Sun News the multi-state umbrella membership coalition also is urging people to comment in favor of strengthening the proposed rules.

The proposal, as it stands, would reduce drilling-related air pollution, decrease the waste of natural gas, and Increase royalty revenues for both state and tribal governments, according to WORC.

However, it says, “Standards should be stronger by improving leak detection and repair requirements, control of methane emissions from oil and gas infrastructure, regulation of flaring, and enforcement of the rules.”

The American Petroleum Institute, or API, said on Feb. 8 that it has requested that the Bureau of Land Management extend the comment deadline for the proposed rule for at least 30 days, until May 9.

In earlier comments on the proposed rule, the institute told the BLM it believes the agency “does not have plenary authority to regulate the venting and flaring of gas on federal leases.”

It says, “EPA and the states regulate emissions for the benefit of public health and the environment. There is no need for BLM to develop additional regulations to address methane.”

API is a national trade association representing over 600 member companies involved in all aspects of the oil and natural gas industry. API’s members include producers, refiners, suppliers, pipeline operators, and marine transporters, as well as service and supply companies that support all segments of the industry.

The Mineral Leasing Act of 1920 requires the BLM to ensure that lessees ‘‘use all reasonable precautions to prevent waste of oil or gas developed in the land . . ..’’ The BLM says it believes “there are economical, cost effective, and reasonable measures that operators should take to minimize waste, which will enhance our nation’s natural gas supplies, boost royalty receipts for American taxpayers, tribes, and states, and reduce environmental damage from venting and flaring.”

In Fiscal Year 2014, the production value of onshore federal and Indian oil and gas leases exceeded $27.2 billion and generated approximately $3.1 billion in royalties.

Over the past decade, the United States has experienced a dramatic increase in oil and natural gas production due to technologies such as hydraulic fracturing and horizontal drilling, the BLM notes.

However, it said in the Federal Register, “The American public has not benefited from the full potential of this increased production, due to the flaring, venting, and leakage of significant quantities of gas during the production process.”

According to data reported to the Office of Natural Resources Revenue, federal and Indian onshore lessees and operators lost 375 billion cubic feet of natural gas between 2009 and 2014 – enough to serve about 5.1 million households for a year, assuming 2009 usage levels.

“Flaring, venting, and leaks waste a valuable resource that could be put to productive use, and deprive American taxpayers, tribes, and states of royalty revenues,” says the BLM.

“In addition, the wasted gas may harm local communities and surrounding areas through visual and noise impacts from flaring, and regional and global air pollution problems of smog, particulate matter, toxic air pollution (such as benzene, a carcinogen) and climate change.”

BLM records reveal it permitted royalty-free flaring of $524 million worth of natural gas just in North Dakota’s tribal, allotment and public lands from January 2007 to April 2013.

The rules proposal is consistent with the Administration’s goal to cut methane emissions from the oil and gas sector by 40 – 45 percent from 2012 levels by 2025, the BLM says.

“Measures to conserve gas and avoid waste may significantly benefit local communities, public health, and the environment,” the agency concludes.

POWER testifies to “have witnessed the visible and costly unquantified damages of weak environmental laws and even weaker enforcement of regulatory rules for the last eight years. Everyday black smoke containing particulate matter has been visible at well sites around us.

“Just recently, we viewed an infrared camera used at one well site in Mandaree, which showed a continuous plume of invisible methane gas flowing directly into the air we breathe,” POWER said.

“We know from science based research from other states that have a history with hydraulic fracturing in their communities the four common chemical air pollutants from drilling and fracking. They are benzene, toluene, ethylbenzene, and xylene, called BETX.”

The group alerted the community to the dangers of this mix, stating, “These chemicals released in the flaring and venting are endocrine disruptors. Some of the health conditions linked to even low levels of BETX are sperm abnormalities, reduced fetal growth, cardiovascular disease, respiratory dysfunction, and asthma.

Comments may be submitted orally or in writing at the Dickinson hearing set for 1 to 4 p.m. Mountain Time at the Astoria Hotel and Event Center, 363 15th St. West.