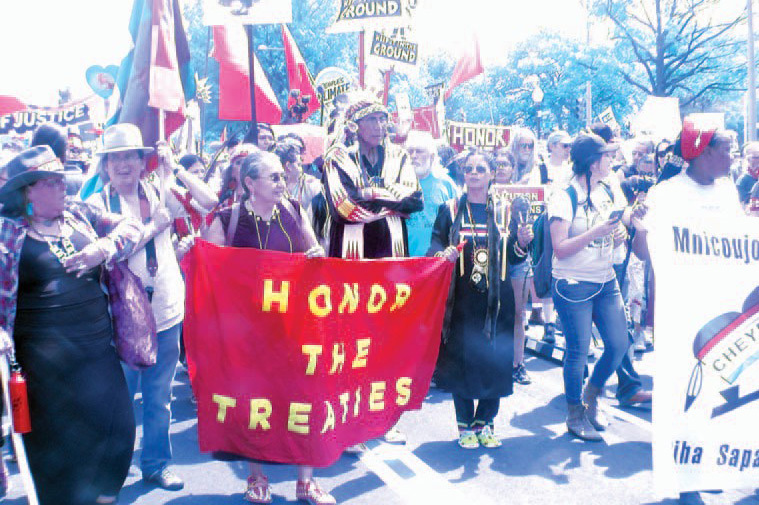 The 2017 Climate Change March in Washington, D.C., included a number of prominent Native Americans, such as Chief Arvol Looking Horse of Cheyenne River, pictured at center.

WASHINGTON –– Seems like everyone’s marching these days. Since January, DC has been the site of a women’s march, an indigenous people’s march, and a scientist’s march—if one goes as far as to consider any of the current administration’s initiatives as accomplishments, one could say President Trump’s ability to unite his public opposition contends as truly impressive. 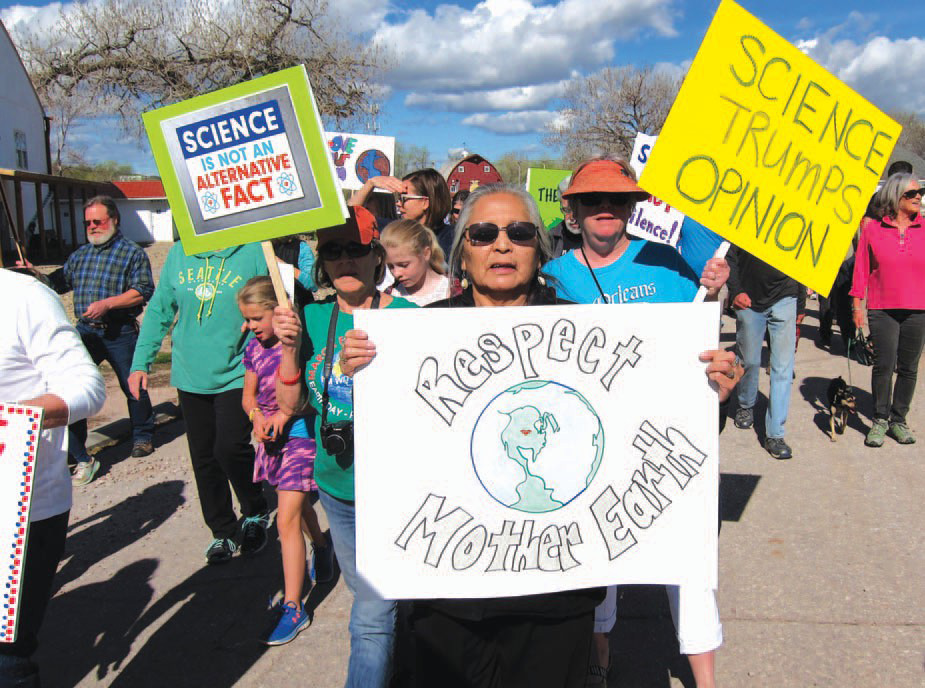 The first Climate Change March in September of 2014 drew an estimated 400,000 people to New York City. The indigenous people’s contingent led that march with Sting and Leonardo DiCaprio flanked by Amazonian tribal representatives.

Indigenous peoples also took the front ranks this time. As much as the march was designed to let the Administration know that efforts to roll back environmental regulations that protect lands, waters, and wildlife, cut the EPA’s budget, bring back coal, and slash any funding toward climate change mitigation will not be tolerated.

For native participants, it was just another day in a continuing saga of fighting for Mother Earth and an indigenous tradition of doing whatever can be done to stand up to those that would threaten Her—all juxtaposed on the backbone built by the protests against the Dakota Access Pipeline, which Trump cleared the way for almost as soon as he took office.

Greg Cournoyer Jr. is a councilman who sits on the Business and Claims Committee of the Yankton Sioux in Wagner, S.D. An original protester at Standing Rock, he talked about how his ceremonial life has motivated him and many other tribal peoples to push back against extractive industries and why they’ve become a unifying factor for the climate change movement, “All I see is corporate greed and lies. The hypocrisy has gotten my attention.” Referring to the governmental response at Standing Rock, “They called us eco-terrorists. The government has always been terrorists to Indian people.”

If the words Mni Wiconi (Water is Life) were misunderstood among those unfamiliar with the actions at Standing Rock, as 90-degree heat blazed most of the day, it meant everything to a sweltering crowd of an estimated 200,000. Water stations lined the parade route as it snaked down Pennsylvania Avenue toward the White House. Organized in contingents headed by “Protectors of Justice,” comprised of indigenous peoples and frontline environmental groups, others included spiritual and religious communities, scientists, educators, labor, voting rights, government workers, elders, children, and human rights advocates. An effort to link the dots between environmental issues and other concerns told a story of the connection between immigration, gender, healthcare, and other sectors. Less pronounced attendees included former Vice President Al Gore and business magnate and philanthropist Sir Richard Branson. While Leonardo DiCaprio once again stood on the front lines, it was Chief Arvol Looking Horse from Cheyenne River who many Native American marchers gravitated toward. “We’ve got oil coming down the Missouri they say that pipelines don’t break,” he said. “But it’s coming down. We need to stop the fracking and the pipelines, and open pit mines—everywhere.” He cited energy development in Brazil and other Amazonian communities. “It’s happening to indigenous peoples all over and they’re suffering.”

Compared to the over 2 million American Indian people in the United States, those attending the march represented a very small number who were able to make the journey. Jobs on the reservation are still scarce and not everyone is on the same page when it comes to big oil. Three Affiliated Tribal member, Lisa Deville is a credentialed environmental scientist. She sits on several environmental councils. Her reason for coming to DC was deeply personal. “We’re on the front lines of oil development,” she says. We know that there’s climate change and it’s the humans who are causing it. We’ve got 1500 oil wells on our reservation and another 1500 coming. Our land is covered with flaring and venting. It roars all night.” She says while the oil industry has brought some jobs, it’s also resulted in increased drug use, gambling, prostitution, and crime—along with environmental degradation. “We see the impact of this every day on the land, the people— even the wildlife. We see 10 dead deer run over by trucks in a two-mile stretch of road. Flattened porcupines, entire prairie dog towns just bulldozed over. It’s sad. We can only eat one fish from the lake once every month because the mercury is so high. Our entire quality of life is changed. The new four-wheel drive truck is more important than getting our culture back into the schools. We’ve traded community for capitalism.”

The march split off in two directions reuniting in front of the White House where protesters jeered a non-existent Trump. Later, a cadre of native youth who had been at Standing Rock offered an honor song as march participants gathered in front of the stage. Standing Rock Chairman Dave Archambault looked around at the crowd and reflected on the importance of keeping the pressure on. “We’ve got to build awareness. It’s going to be a struggle, but it’s never over and we’re going to continue to stand up for what’s right. I believe going forward it is going to be tough for this administration and the corporations to ignore us. What we do today could go into decades. Our behavior is going to dictate the future.”

As trash cans filled with plastic water bottles and dog-eared signs lay on the ground like sweating polar bears, indigenous participants made their way to a local church for a pot luck dinner and social dance where talk included concerns about the future of Indian Country and all tribal lands under an administration that seems to equate extractive technologies with national primacy. Chief Looking Horse shared his opinion. “I can say this about Turtle Island, as First Nations – We’re going to make this great again.”

About 500 people turned out at the March for Science in Rapid City on Earth Day April 22, one of at least 600 such events organized around the world. Local march organizers Sarah R. Keppen and Cole Sawyer thanked the crowd, speakers, and support volunteers for the success of the action.

Its purpose was to demonstrate support for science and the fundamental role it plays in serving and improving our society through informed-policy, they said.

During the week of March 23, the national March for Science is urging people to contact political officials. Rapid City organizers asked South Dakotas to contact your Congressional Rep. Christy Noem, Sen. Mike Rounds and Sen. John Thune with a postcard (available at p2a.co/wTZgK9) noting the authors’ reasons for supporting the March for Science.