Kim and Donald have matching hairdos 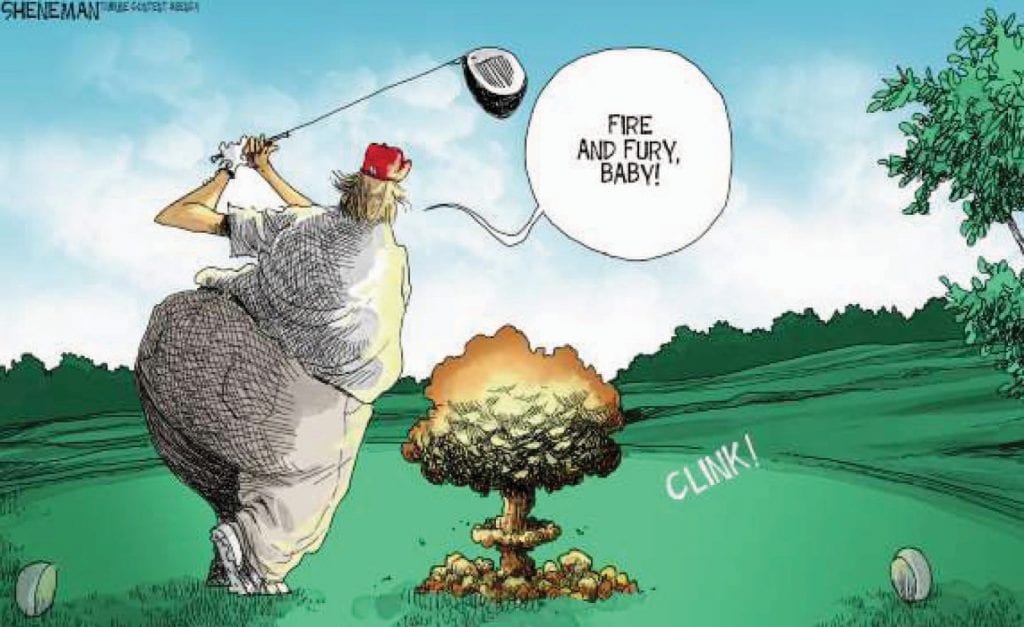 There is one thing Donald Trump and Kim Jong-un II have in common and that is their ungodly coiffures. Much has been made of the hairdos that defy logic.

There are also the similarities they have in their showmanship and constant bragging about accomplishments real or imagined. If Trump had the absolute power held by Kim he probably would have had some of his saltier opponents taken out and shot, or as Kim has done, fed to the wild dogs or shot with an anti-aircraft gun.

But both of them are now exchanging insults and threats that are usually the first steps leading to war.

A war between two atomic powers is unthinkable. It is ironic that during last week’s threats it happened to be the anniversary of the atom bombs falling on Hiroshima and Nagasaki, bombs that took the lives of more than 150,000 people.

North Korea has several hundred artillery guns right on the North/South border with the range to bombard Seoul, South Korea with a population of nearly 10 million people. Kim has called Trump a “paper tiger,” and because of his (Kim’s) immense ego, he has no fear of Trump or the United States.

It is suggested that North Korea has as many as 60 atomic bombs at its disposal and rockets that can now reach as far away as New York City and with a madman at the switch who cares nothing about the welfare of his people the possibility of a war is not beyond the imagination.

Most of us knew that if Trump was elected President of the United States his instability would be tested one day and that day is now at hand. This is his first major crisis and we can only pray that he has cooler and wiser heads around him to keep him from leading us down the road of destruction.

We have written in the past that there are more than 20,000 Oglala Lakota living in Rapid City who do not have the right to vote in tribal elections although many of them are land holders on the Pine Ridge Reservation. There was a glimmer of hope when the newly elected President Scott Weston expressed his opinion that the Oglala living in Rapid City should be allowed to vote. We have heard nothing since the comments he made before the election last year.

We believe that a 10 voting district should be formed in Rapid City and that the Oglala living in Rapid be given the chance to run a candidates for the Tribal Council and for the Presidency of the Tribe.

Disenfranchising an entire class from tribal elections is not acceptable.

As we have suggested in the past, one day a lawsuit will be brought against the tribe and they will be face with the task of defending why they are not allowing their own people to vote or run for office.