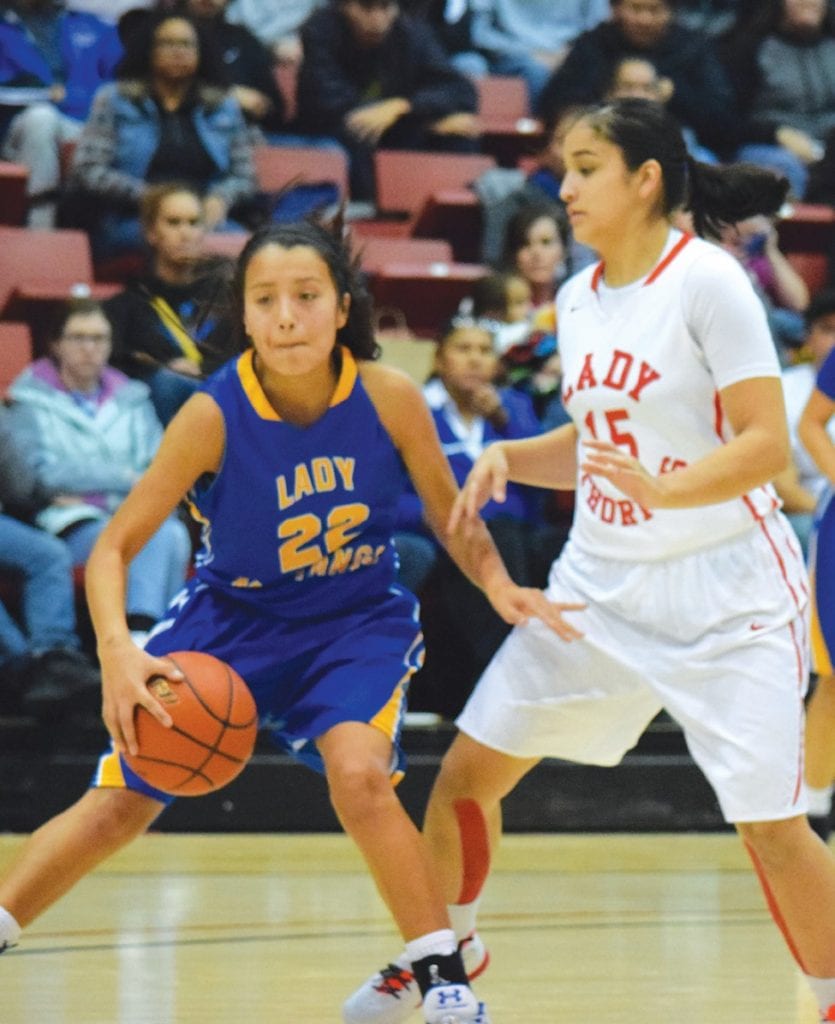 Little Wound’s Miracle Spotted Bear squares off against Cheristine Mousseau of Pine Ridge at the 2016 LNI.

RAPID CITY — Defending champion Little Wound Lady Mustangs brought home the LNI title last December, with a 65-31 pasting of the Lady Thorpes from Pine Ridge. One game in their championship run stands out, the semi-final match-up against Todd County. It seemed for most of that game, the Lady Falcons would prevail, but Lyle Lebeaux’s charges did not panic, and there were no biased ref whistles to steal their victory like there would be at the state meet in March, and they eked their way into the final, 47- 45. That game gives a huge insight into how this year’s competition will turn out.

Let’s look at the matchups, emphasizing the top four teams as we see them, starting with the 10 a.m. game on Wednesday, December 13, Ice Arena, with Little Wound v Crazy Horse.

Luck of the draw for Class B Crazy Horse, to draw your nearest Class A rival in the opening game.

Little Wound lost four seniors from last year’s LNI champion: Janay Jumping Eagle, Chante Ferguson, Taylor Christiansen, and Chelsea Iron Crow. Jumping Eagle was special, she was a rock in a sea of competition turmoil, and she had a knack for draining a three just when Coach Lyle Lebeaux needed it most.

Many male coaches struggle to connect with girl players. They mean well, but they are too gruff and critical for girls, and the best coaches find a way to connect, as a strong but measured authority figure, who genuinely cares about them and inspires them to play tough, smart basketball. Lebeaux has that connection, and when he talks about his team, its like listening to a father brag about how special his kids are, or a father who can also chastise them for being foolish, and a father who is also a terrific basketball coach.

The Lady Mustangs traveled to Crow Creek last Saturday, where they were handed a 73-61 loss. What is missing is strong leadership.

There are five seniors on this year’s squad, but they need to get on the same page. Guard Miracle Spotted Bear is a charismatic performer, with great natural talent, and in Paula Yellow Boy and Jacynda Blacksmith she has some big girls to control the inside game, while she works the perimeter, and drives the lane. The team will need time to find its own 2017-18 identity, because the ghost of Janay’s leadership still haunts the practice court.

Little Wound should beat Crazy Horse, and if they do, they will face the winner of the Custer, Standing Rock game. The danger is in looking past the Lady Wildcats, who should win their opening game without too much trouble, because they have the players to pull an upset.

Coach Bob Boyd’s Lady Falcons appear loaded for bear this season. They already have two wins under their belt, 74-24 over Valentine, and 78-29 over Bennett County. Admittedly, two weak teams, but the outcome indicates a consistency of excellence which could result in a banner year for Todd County.

There is height to control the boards in Gabby Iron Heart, Katie Bear Shield and Shayla Bordeaux, and two first rate guard/forwards in 5-6 junior Shanelle Lone Dog and 5-7 phenom Caelyn Valandra-Prue. The one quality double-tough bull riders admire most in each other is “try,” and Lone Dog is full of try. Valandra-Prue is perhaps the finest athlete in the state of South Dakota, at any level, given her over-all quality in every sport she participates. She has the talent to excel as a sprinter from 100-400 meters, plus finish in the top fifty running 3.1 miles in cross country. No other athlete comes close to such versatility. All of that, and she is only a freshman. Her body is a competition machine, lean and precise, but strong and explosive, and Coach Boyd had two words to describe the bow that ties all those gifts together—“highly coachable.”

Although they made the final last year at LNI, the Lady Thorpes were taken apart by Little Wound. They were 5-0 on the young season before that loss, including wins over St Francis and Red Cloud. After LNI, they lost to McLaughlin, 71-47, Little Wound again, 76-62, narrowly to Mobridge, 49- 45, and then to Todd County, 87-60. But Coach Laura Big Crow righted that ship, by beating Crow Creek and Little Wound, back to back, getting revenge against the Lady Mustangs, 58-57.

All of this means it was a helter-skelter kind of season for Coach Big Crow, but the slate is wiped clean, she returns with a talented squad and, behind her, a season of hard lessons learned. And who should be her first opponent, but the team that ended her run last season, St Francis.

Jazmine Thompson is a point guard with a wealth of experience. She has been to the front lines and operated under fire. Danielle Walking, Katerri Weston, and Taysha Big Crow have the potential to form a tight unit that knows how to compete and win. But the heart and soul of Pine Ridge will be Duka Thompson. The 5-8 junior can be small and quick or she can be big and powerful, and she has a competitive fire in her belly second to none. A year older and wiser, if she can equal her talent and determination with leadership to fuse the disparate parts of the Lady Thorpes into a single weapon on the court, Pine Ridge can beat any team in the bracket.

St Francis lost one player to graduation, and so they will definitely improve on last year’s 9-13 mark. This is the toughest game of the opening round in the entire LNI, boys or girls. Pine Ridge should prevail, but it is far from a given. Game begins at 1 p.m. at Ice Arena.

Most would probably think McLaughlin or Red Cloud should be the fourth team considered, but Crow Creek has earned this spot by already defeating defending champion Little Wound, 73-61, on December 9. They are 2-0 on the young season and Coach Vilas Fallis has a Pine Ridge transfer in junior Sarah Hunter. Audrey and Rozee Drapeau are precocious Eighth Grade guards and at the other extreme are two seniors Traelene Fallis and Lillian Flying Hawk.

Sometimes a year makes a big difference, and this Lady Chieftains team could be hot just when they need to be, early in the season, before the other teams have meshed into the competitive units they will be.

They will be a tough test for the Lady Chieftains, and this is the second best game of any opening bracket at LNI. Game time is 8:30 p.m. at Ice Arena.