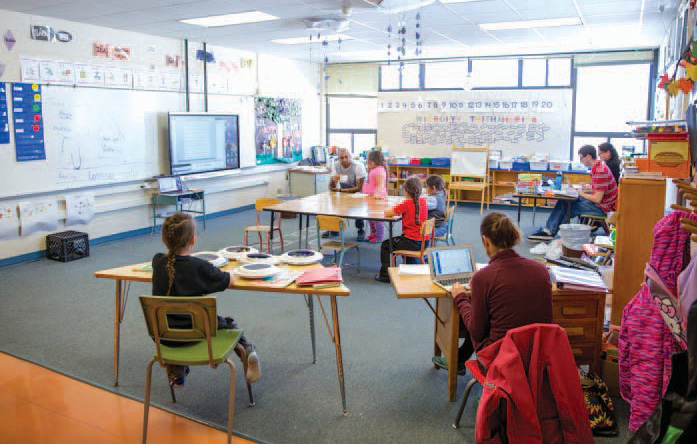 On a crisp morning this winter, a group of kindergarteners at Red Cloud Indian School gathered around their teacher to listen to the classic story Where the Wild Things Are. But the teachers in this particular classroom did something different: they read the book entirely in the Lakota language. When a student wasn’t familiar with a word from the book, the teachers used gestures or movements to act out the meaning and help students understand. And once the story was over, the teachers then launched into a math lesson in Lakota – with students joyfully chanting new sets of numbers – without once breaking into English. 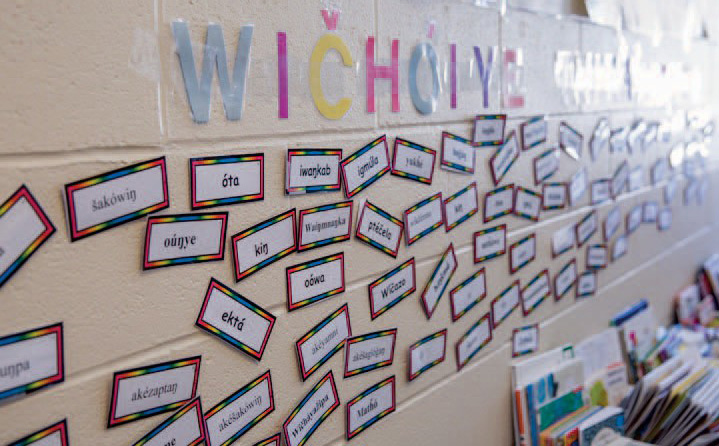 These kindergarten students are the first to take part in the Lakota Language Immersion Classroom (LLIC) – one of the reservation’s first elementary-school tracks that allows students to learn entirely in the Lakota language. A program of Thunder Valley Community Development Corporation and housed on Red Cloud’s main campus, the LLIC is poised to advance language education by allowing students to learn in a completely new way, using Lakota as their primary tongue.

For Matthew Rama, Initiative Director of Thunder Valley CDC’s Lakota Language Initiative and the lead teacher of the LLIC, this immersion approach is a key to helping Lakota students succeed. 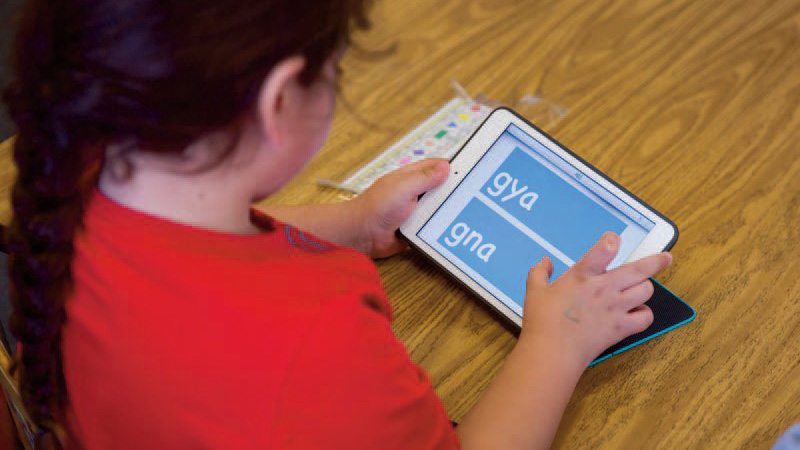 “Across the reservation, our dropout rate is still close to 70 percent. Our approach to education in Indian Country has continued to fail our kids – and we all need to ask why we keep doing the same thing over and over and sticking to the same ineffective model,” says Rama. “We need to make a change for the kids coming up now. We know that building their confidence in who they are as Lakota children – giving them pride in their culture and heritage – can make a powerful difference in their educational achievement. And that can begin by helping them claim their ancestral language as their own.” 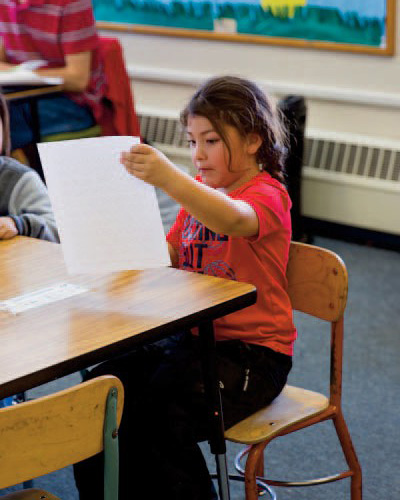 For years, Red Cloud and Thunder Valley CDC have been dedicated to educating and nurturing a new generation of Lakota language speakers. The survival of the still-endangered language is a central part of both organizations’ missions—and both have launched major efforts to encourage both children and adults to speak Lakota in their daily lives. Since 2008, Red Cloud has been working to develop the first comprehensive K-12 Lakota language curriculum, so that all of its students – at every grade level – will have progressive Lakota language learning integrated into their general education. Thunder Valley CDC has focused on expanding access to the language through the programming of its multifaceted Lakota Language Initiative. One of these efforts, the Lakota Immersion Childcare Program, provides prekindergarten aged children with the rare opportunity to learn Lakota as a primary language. Without a language immersion elementary school to attend, however, the children risk losing their language fluency.

Now, for the first time, Thunder Valley CDC and Red Cloud have embarked on a journey to make Lakota immersion education at the elementary school level a reality on the Pine Ridge Reservation. Through a new partnership forged this year, Red Cloud’s campus serves as the physical home of Thunder Valley CDC’s immersion classroom.

“We are truly proud to be a partner to Thunder Valley [CDC] in its groundbreaking work on Lakota immersion education. Both of our organizations are deeply committed to sustaining the Lakota language for future generations. It’s a privilege to be working together toward that goal,” said Robert Brave Heart Sr., Red Cloud’s executive vice president. “From our experience here at Red Cloud, we know that learning Lakota helps our students excel, both inside the classroom and out. We are committed to giving more students the chance to learn in that environment.”

This collective pathway, according to Thunder Valley CDC Executive Director Nick Tilsen, is the type of collaboration that will halt language loss and ultimately contribute to ensuring Lakota children are poised to be successful in the 21st century. “The partnership between Thunder Valley CDC and Red Cloud,” shared Tilsen, “is focused on putting the wellbeing of the children and the Lakota Language at the center of every decision.”

Since the academic year began, Matthew Rama has watched his students interact with each other more and more without breaking into English. For him, it’s been nothing short of inspiring. Having spent the last several years directing Thunder Valley CDC’s immersion childcare program, he understands the power of the immersion experience, particularly for very young children. But this classroom, he explains, represents the next step in what immersion education can do. It’s giving students a chance to learn more advanced concepts in every subject – from math and science to reading – using Lakota as their first language. And he is already seeing their skills expand exponentially.

“They are learning and exploring everything they would in a standard, English classroom, but at the same time they are engaging so much more in Lakota,” said Rama. “Their skills sets and vocabularies have grown so much; they are using longer, more complex sentence structures when they speak. Their understanding of the language has improved an incredible amount. It’s really exciting to see that progress in them.”

To provide learning materials for the LLIC, Rama and other staff members from Thunder Valley’s Lakota Language Initiative have translated Red Cloud’s entire Kindergarten curriculum into Lakota. It includes a science component, a reading program called Learning AZ, and a Houghton Mifflin Math program. In addition, Thunder Valley CDC’s Lak.ótiyapi Press has created a multitude of Lakota multimedia tools, including books and videos that are used in lessons. Rama and his fellow teachers are also incorporating some of the Lakota language materials developed by Red Cloud’s Lakota Language Program staff.

While a sound curriculum is essential, Rama explains that providing a true immersion experience is also a critical component of this program. LLIC teachers want to challenge students to truly engage with the language in every context. And so when they are in the LLIC classroom, they make it a practice never to break into English. Even when students aren’t there with them, the teachers speak to one another only in Lakota. When a student doesn’t understand a word in Lakota, a teacher will point to objects around the room or mimic an activity to get the idea across without using English. After only a few months in the classroom, the practice is already making a difference. Students are becoming more and more confident in their language skills – and in themselves.

During this initial phase of the program, the LLIC is limited to five students, all of whom attended the Lakota Immersion Childcare Program and have a baseline knowledge of the language. Thunder Valley CDC is now translating Red Cloud’s first grade curriculum, and next year this group of students will progress in the immersion track while a new group of graduates from the Lakota Immersion Childcare Program begins kindergarten in the LLIC. Over the next five years, a new grade level will be added as students move through the program. By 2020, the plan is to have a group of at least 25 students from kindergarten to fourth grade studying in the LLIC program. But staff at both Thunder Valley CDC and Red Cloud hope that there will be room and resources to expand enrollment and provide immersion opportunities for more students.

For now, though, Rama is focusing on his current students and learning what works best to support their command of the language. And every day, he has a chance to celebrate their successes.

“They are just a regular group of kindergarteners – so at this age, they have such a sense of wonder about the world,” shared Rama. “The other day we were walking outside, returning to the classroom from Physical Education, and it started to snow. They were all so excited, running around and shouting together. But instead of speaking in English, they were calling out to each other, saying “Wá hi.hé!” which means “It’s snowing!” And the fact that they were expressing that wonder in Lakota was really great to see.”

For more information about this strategic program and partnership, contact Robert Brave Heart at Red Cloud Indian School at (605) 867-5491 or Cecily Engelhart at Thunder Valley at (605) 455-2700.