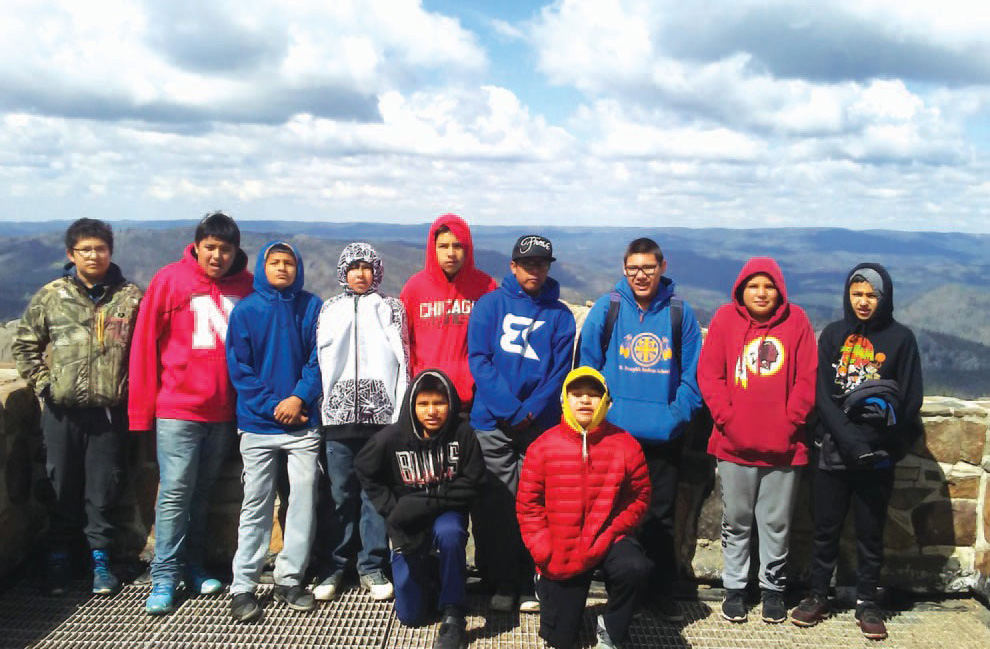 CHAMBERLAIN — Every Lakota life begins with a struggle, not a battle to be won or lost, but an identity to be reconciled in a world rife with diametric underpinnings. A Lakota child must be many things at once. He will be seen as Lakota, but he is probably also Wasicu; he must learn about his culture, their beliefs and heritage, but he is probably also baptized Christian; and he must learn proper conduct for both worlds, because they are not the same, and yet, he has internalized detailed aspects of both, and each part of his world will expect conduct from him by its dictates. 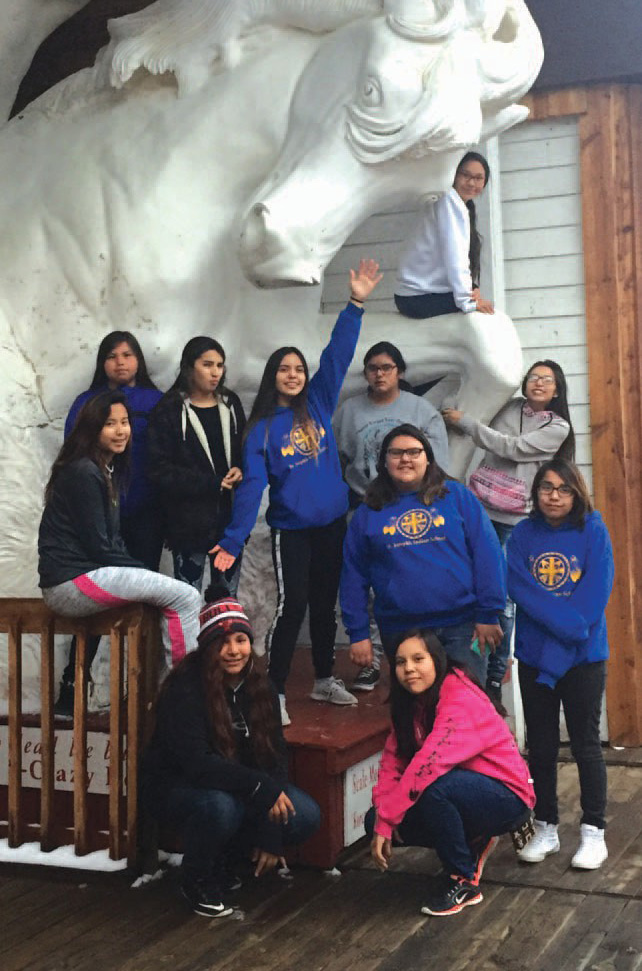 Lost in all of this can be the simple fact that this is a child. We generally assume they know much of what we know, quickly forgetting how different we are as adults, from when we were children, and that we had to painstakingly learn everything that constitutes that difference.

A signature sculpture blending elements of the past and present greets visitors at the entrance to St. Joseph’s Indian School in Chamberlain.

Many Lakota never journey far from the reservation, never get a chance to visit sacred sites, historical places, where the beliefs and traditions of Lakota formed, where their history was played out. But this journey can be essential to understanding who you are, where you came from, and why your world is shaped the way it is.

Every spring since 2009, four vehicles have set out from St Joseph’s Indian School in Chamberlain, and split into two groups of about a dozen Seventh Graders, girls and boys, on a six-day field trip to visit the roots of their Lakota heritage, to stand in legendary places where ancestors stood, to learn who these ancestors were and how they became legend.

“We went all the way out to Little Big Horn,” said Mark Schoenhard, Rec Center Specialist, a supervisor for the boys group. “We decided this year to get all our big driving done the first day. We did Greasy Grass on the second day.”

Other chaperones were Stefen Monteau and Allen Wilson. The journey began with an inipi, or sweat lodge ceremony, on campus on Wednesday, May 17. The group set out at 8:30 the next morning, expecting to make Devil’s Tower, Wyoming, by noon.

The girls group had just the opposite schedule. LaRayne Woster, Native American Studies Teacher, April Fallis, School Librarian, and Frankie Willard, chaperone, decided to head to the nearest stop possible, in this case the Wounded Knee memorial site, after a scenic drive down through the Badlands.

“We went to Fort Robinson in Nebraska,” Frankie Willard said. The girls were on the trail of Crazy Horse, Fort Robinson being where he was murdered in 1877: “We kind of followed him backwards in time.”

Frankie is the daughter of LaRayne Woster, and for her, one of the best parts of the trip is being with her mom and April, because she said “they’re elders.”

LaRayne said, “I tell the girls we have Gramma April, and then we have me, and then Frankie, and then you guys, and so we have all four ages.”

Frankie enjoyed watching the girls change from the start of the trip to the end, as they met people and learned things that better define the role Lakota women had in the traditional tiospaye: “It’s really good to learn about their purpose as Lakota women, and that they are sacred.”

“Every night we’d do like a prayer circle,” Frankie said. “Everyone would share their favorite part of the day and what they had learned.”

April is a balanced product of both worlds. Her mother is from Standing Rock and she was raised on Crow Creek, and she was raised to be a “strong Catholic,” but she melds her Catholic faith in with her traditional perceptions: “It’s okay to carry a Bible in one hand, and a chanunpa (sacred pipe) in the other.”

April is a story teller in the school library, and she tells traditional tales to keep the imagination of the young alive with the creative inspiration of the past. Bear Butte. Mahto Paha, is April’s favorite spot—“The prayers, the flags, the trees…”—the final stop for both groups, and the one time they crossed paths, and it was because she was sitting on a trailside bench that this feature story even happened.

“Some (of the girls) stay back with me,” April said, about hiking up Mahto Paha. “I carry my chanunpa with me. When I first went up, I would take my chanunpa and I would stop four times. Pray, ask the grandfathers for strength. This breeze just came over me, and something happened different every time I went.”

“When it comes to things like that,” April said, “I get really emotional when I take the kids to some sacred spot. Should we pray together, or do you want me to pray, and they say they wanted to pray. They felt something they had never known before about it.”

Mark had a different perspective on the boy’s trip: “For me, I always tell the boys, I am the only Non-Native on the trip—I always get to see the boys experience what I can never get to experience, to see where they come from. It’s very powerful for me. You get to the memorial at Greasy Grass and every year one or two of the boys will see their (sur) name on that wall. It’s always really humbling to go on this trip.”

Such a trip can rack up expenses. “In the beginning we used to have contests to see who could spend the least,” LaRayne said. “We try to buy most of our food here. We ate out at Crazy Horse and it was $200, stopped at Taco John’s and it was $60.”

But beyond the managing expenses, LaRayne has a deeper responsibility: “It’s my job to motivate the kids so they want to go. Every place we go we do a preteach about it. We have a paper with a column for what they knew, a column for what they want to know, and when we get back we use that paper for the power point presentation (each student must give about their experience).”

“Some of them are planning to go back to those places and take their families,” LaRayne said. She refers back to her input into the prayer circle: “I pray that our culture goes on, I pray that we don’t lose it.”

LaRayne points out that the Native American Studies Program, that she and Allen Wilson oversee, “has really encompassed all parts of what’s happened here (on the trip). You really can’t separate culture.” LaRayne sums up her approach to mentoring her charges spiritually: “I am going to give you all the information, you have to choose what works for you, body and spirit. Pray however you want, and end it with an amen, mitakuye oyasin, or ‘I am done.’ This group of girls that we had, just got it. I tell them, just because I am a teacher and a Rosebud tribal member, doesn’t mean I know everything.”

Allen Wilson stresses the change of focus in recent years that the preservation of Lakota language preserves more than traditional modes of communication, it contains cultural meaning, and perspective, another language cannot express. There are over 170,000 enrolled Lakota in the world, but Allen points out, when it comes to the language, “there are only about 2000 fluent speakers left.”

It was more than the trip that separated the boys from the girls. When asked what the trip would be like before they left, all the girls answered, “Boring.” When asked the same question, the boys said they were excited to be going. And yet, despite the diametric perception of the trip before going, they were all on the same page after the experience.

Lyle Zephier said: “It’s important to learn about our culture and our people.”

Joy Estes said: “I learned a lot more about my culture, how everything formed and stuff.”

LaShawn Thompson said, “It was fun and I didn’t want to come back. I wanted to go back and do it again. It made me wanna live like that.”

Despite the fact most every place they visited was a tragic place, a place where Lakota people died, where their culture was violently torn from them, the Seventh Graders at St Joseph’s did not come away dwelling on the dark past. They got to see where their ancestors lived, see the places where they died, and they grew to understand them as individual human beings. By trip’s end, they only wanted to meet them, and live like they had lived.