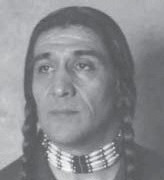 WALNUT CREEK, CA –– Before the American Indian Movement, back in the socially turbulent 1960’s, a powerful voice for Indian rights arose in the larger-than-life activist, Lehman Brightman. The first to focus issues, galvanize protest, and conceive strategy, Brightman spent a half century in the trenches battling for Indian people and the principles of social justice.

What most will remember about the 6-foot-6, physically imposing Brightman, was not his size and strength, but his passion and the quality of his mind. Yes, he was considered profane and irreverent, but in his words was intelligent, informed and always principled perceptions of the Indian plight versus dominant culture duplicity.

He was raised in Oklahoma and on the Cheyenne River Sioux Reservation, where his mother was an enrolled member. The things he saw in the reservation world, the poverty, the misery, the injustice, would shape his conscience and his activism.

Brightman excelled in sports, participating in track and as a running back at Oklahoma State University. He was All American in Football, playing in the Canadian professional league before forced to retire with an injury. When Korea came about, Brightman enlisted in the Marines, served in Korea, and was wounded in combat. He was awarded the Purple Heart, and returned home with a renewed sense of mission and purpose.

Brightman earned his Bachelor’s degree at Oklahoma State, and then received a Master’s degree and completed the coursework for his doctorate at UC Berkeley.

In 1968, Brightman founded the United Native Americans, an Indian nonprofit organization to promote the progress and general welfare of Indians. A year later, he established and coordinated the first Native American studies program at UC Berkeley. He continued his education career at the UC San Diego, Sacramento State, DQU and Contra Costa College.

As an activist, he served as director of the San Francisco American Indian Center. He was involved in the Alcatraz Occupation in 1970, and the takeover of Wounded Knee. He also led the takeover of Mount Rushmore in 1970. Following Wounded Knee, Brightman offered sanctuary to AIM fugitive Dennis Banks.

The type of activism Brightman engaged in got results, and the target of his protest was not always the big picture, but the everyday struggle for quality of life. For example, when the racist Rapid City School District claimed Sioux Edition children lived outside their two-mile limit, and so the city did not have to bus them, Brightman walked the distance to prove it was less than two miles, and as a result the city was forced to bus these children.

Brightman was also a journalist, the former editor of the first national Indian newspaper, Warpath. In 2009, KQEDSan Francisco, honored Brightman during American Indian Heritage Month for his outstanding work in the Indian community.

“Every mile of this country,” Brightman once said, “is stained with Indian blood, and every mile contains the bones of our ancestors. They fought and died that we may be here. The least we the living can do is continue that fight. We are the American Indians.”

The life of Lehman Brightman could fill a book, and someday it will fill a book, but for now, all of Indian country has lost one of its greatest warriors and principled intellectuals.

He had a perception of Indian activism that belied his seemingly aggressive persona: “They’re defending themselves, not with violence. But all of sudden you have a new Indian emerging who is developing a new way to fight—the way of the tomahawk and the bow and arrow are long gone.”

Brightman said that Indians must become their own doctors and lawyers and teachers, and help themselves.