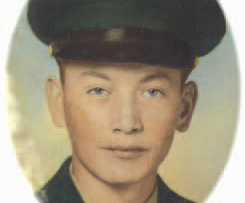 When Joe was 17 years old, he joined Company A 81st Medium Tank Battalion, with the 5th Armored Victory Division in 1956. On July 29, 1957 he had completed his courses and became a Tank Commander, Operator and Mechanic to the Seventh Untied States Army Tank Training Center in Germany. During his time in the service, Joe had traveled around the United States and various other countries, including Europe.

In 1958, Joe had been discharged from the United States Army. He then settled down in Rapid City where he met and married the love of his life, Myrnette Fern (Apple) Janis. Later, they had four children; Ronald Janis, Gregory Janis Sr., Craig Janis Sr., and Joseph Loyola Janis Jr. “Lil Joe”. Joe then moved to Kyle with his family where he was self employed, owning and operating Son’s Construction with his sons. He spent his life building homes and businesses, including Pine Ridge Hospital and the Civic Center in Rapid City. After ending Son’s Construction in 2002, he was employed with the Oglala Sioux Tribe TERO Board in 2003; serving the Oglala Sioux Tribe for 15 years.

Joe was a loving and caring father, grandfather, uncle, and brother. He loved his family very much, always talking highly of them, especially his grandkids. He was so proud to see how much they grew into young adults with kids of their own. He always said, “I never thought I’d be able to see this day”, every time a great-grandbaby was born. Joe was always happy he would bring a joke out of nowhere and have you laughing even on your saddest day. He made a great impact on many of our lives. He was like a father to many of us. For that, he will be greatly missed and forever in our hearts.