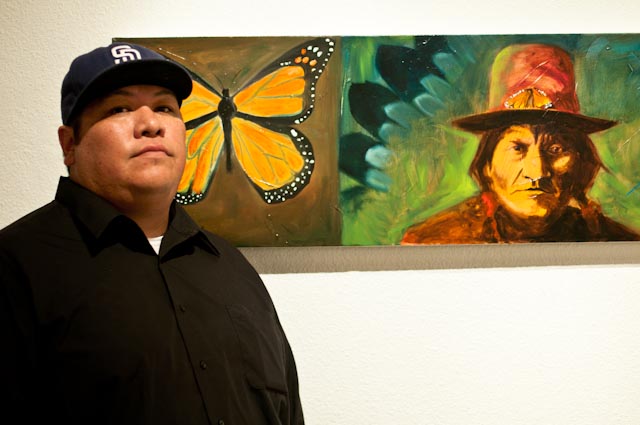 RAPID CITY –– Cloud Medicine Crow “made some really bad decisions” as a young man. Decisions that could have cost him his livelihood – or worse, his life. Instead, he’s parlaying that “slip into darkness” into a beautiful world of art and education.

Born in Sturgis, South Dakota, Medicine Crow grew up the youngest of three brothers in a household without television. So after school, “we’d draw war,” creating their armies from pencil and paper. All three were natural talents, he asserts, and he “was always one of those kids everyone comes to, asking you to draw something.” After High School he was accepted into an art school program in Santa Fe. The curriculum itself was valuable for him, of course, but perhaps the greater impact came from the education he received from the other artists. “Everybody is always at a different level,” he explains. He learned how they were making a living creating, and while it took him awhile to gain his own level of discipline – “I’m the world’s worst procrastinator” – he eventually began working as an artist himself. 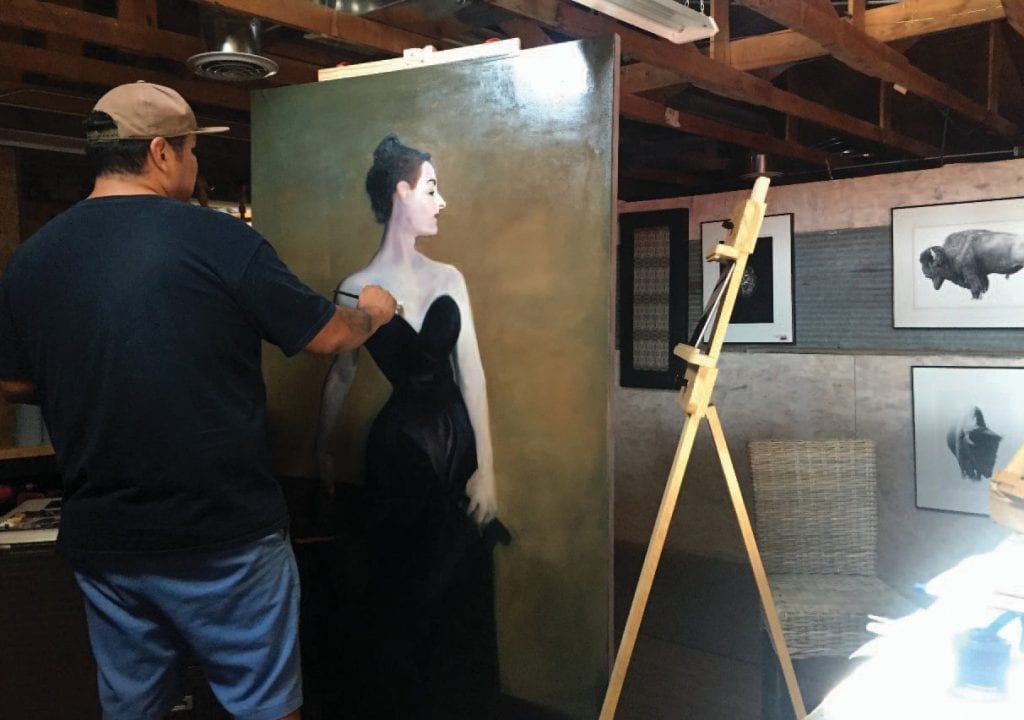 Cloud Medicine Crow at his easel.

His career began in Alaska where he painted images from his child myself hood on the reservation; violence, abuse, alcoholism. It was there, too, where his own life grew dark and he began using hard drugs. He witnessed terrible things; drug use, addiction, and death among them. When he finally asked himself “Do I really need to lose everything from this?” he found the strength to heal and used his art to help him on his journey. While he faced some of the darkest moments of his life there, Medicine Crow still speaks fondly of his time in Alaska. He confesses it wasn’t his most productive, but has tremendous gratitude for what he learned about the business of life as a professional artist. His journey out of darkness also led him out of Alaska and back stateside. Since then he voluntarily completed a treatment program that helped him understand what was at the core of his drug use. “It took me 30 years to understand why I had to go through all that stuff.”

Back in Rapid City, “back where I kind of left off I guess,” Medicine Crow likens his journey to another kind of art; “ceramics – I was shaped and molded and fired through the kiln… I’ve made it through the worst things.” For Medicine Crow, his life and his work are now “about lifting people up. I’m not looking for that dark stuff anymore. If I come across someone who’s struggling, hurting, I’m quick to say something.”

He’s also using his art to embolden others on their own journeys. On a recent trip through South Dakota, he passed a group of inmates on the side of the road. “Seeing all these young men in their jumpsuits,” Medicine Crow wondered if perhaps “art could allow them to express their anger and do something better. It doesn’t make you any better or stronger to do violence to other human beings.” Releasing those feelings, though, is deeply healing, and art can be a wonderful outlet.

Understanding artistic resources are unavailable to many – and often those who need them the most – Medicine Crow recently partnered with First People’s Fund to bring some of those resources to the people who need them. “[First People’s Fund] are really setting the pace for how we bring the arts to these particularly rural communities. They are getting artists to teach, and that is a great model for other communities.”

Through the last week in August Medicine Crow will himself be teaching life drawing in Pine Ridge. He designed the class to cover all the basics, like helping youth discover ways to use the tools at their disposal – a pencil, for instance, instead of a specialty measuring tool – to help them recreate whatever they see. To draw from life. “I’m at that age where I’m starting to teach more,” he says of his professional career. “It’s good, it helps me with my own work.”

Too, he credits his studio space at Racing Magpie – the gallery / creative space in Rapid City – with positively impacting his artistic career. “Being here at Racing Magpie – everybody does something different, everybody has their style. It is important not to isolate in your own medium,” he explains. “I know artists on burnout because they’re pandering to the customer, to the market,” creating the same thing over and over because it sells. “You don’t have to paint arrows and feathers to be a native artist,” he asserts. A sentiment reflected in the piece he’s currently working on; an elegantly dressed, alabaster skinned woman with dark hair swept up in a tight bun. It is the underpainting for the front piece of his upcoming solo show, Alaskgahnistan;

Life in Slow Motion, a multi-media exhibit touching on the dark things he’s seen in his life. “Now I’m at a place where I’m starting this production as a way to complete that [dark] part of my life,” he reflects, and in the process, bringing hope, and light, to others.