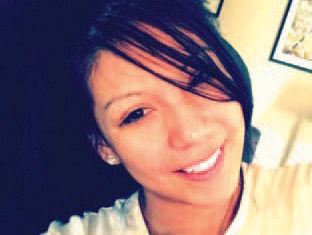 EAGLE BUTTE – Megan High Bear, 23, made her journey to the Spirit World on Jan. 2, near On The Tree.

Funeral services were held Jan.11, at the Old Agency Building, Eagle Butte, with Sister Addie Morris presiding. Burial followed in the Eagle Butte Cemetery. A wake service was held Jan.10, at the hall.

Megan was a very social person and loved experiencing new things in life. She decided to enlist in the U.S Marines Corps, eventually graduating from basic training at Parris Island, SC in mid-2012. Megan really enjoyed the traveling and learning of different cultures. This opportunity showed her the positive in life and taught her to see the good in everyone.

Eventually, Megan was separated from the military lifestyle and returned home to Eagle Butte. This is where she decided to take a little break to enjoy her friends and family. Megan was always laughing and was known to help others when needed, no matter the situation or circumstances. If she had the means to do it, she did. She made sure to put a smile on your face with her modest and witty personality before she left your presence.

After a while, Megan decided her little break needed to come to an end and that she needed more in life, she needed to find that special someone. So, in the beginning of 2016 she finally found the man that made her feel happy and complete. Megan and Tom T. Traversie (Eagle Butte) fell in love and became engaged in July of 2016. They planned to be married in the summer of 2017. Megan and Tom T. adored and doted on all her nieces and nephews and loved them with all their hearts. They dreamed of having a baby of their own in the future. T would say, a baby girl that looked just like Megan and they would name her Tommi.

My sweet baby girl, your mama and daddy are going to miss you so much. Rest easy in paradise. Save a spot for me and daddy. Go fly with the Angels.

Luce Funeral Chapel of Eagle Butte has been entrusted with Megan’s arrangements. (www.familyfuneralhome.net)