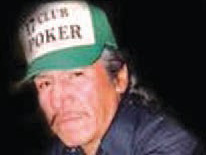 Visitation and gathering of family and friends was held at Seven Dolors Lutheran Church, Fort Totten on Dec. 14. A Rosary and prayer service was held with Deacon Tony McDonald officiating. Mass of Christian Burial was held Dec. 15 at the church with Father Charles Leute, OP celebrating the Mass. Michael be laid to rest in St. Jerome’s Cemetery in the spring of 2017.

Michael Joseph TwoHearts Jr., son of Rachel (Smith) and Michael J. Two- Hearts Sr. was born on New Years Eve, Dec. 31, 1943 at Devils Lake, N.D. He was raised in the Fort Totten area and graduated from Maddock High School with class of 1960. He knew the importance of education and learning and later attended the Hanson’s Mechanical College and Lake Region Junior College.

Michael worked for the potato industry in East Grand Forks, Minn. And lived and worked in Indiana for a time. After suffering permanent injuries, he was not able to work again and living independently became very challenging so in 1994, he moved to Heartland Care Center in Devils Lake.

As a younger man, Michael enjoyed a game of horse shoes with friends and family and was a talented mechanic, working on cars whenever he could. He was often seen doing crossword puzzles in his spare time.

Michael looked to his faith and his family to bring him strength in times of adversity. The love and support of his dear family brought him much joy.

Michael is in the care of the Gilbertson Funeral Home, Devils Lake.