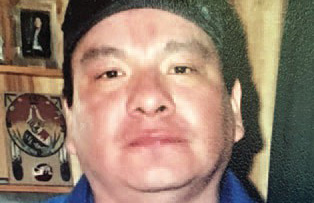 EAGLE BUTTE –– Michael Jason Moran, 49, made his journey to the Spirit World on Sunday, July 2, 2017 at the Rapid City Regional Hospital.

Michael Moran was born on December 5, 1967 to Aldina Moran and James Cloud Eagle. He grew up in the Eagle Butte area, often speaking of his childhood years spent out in the country at On The Trees, where he rode horses, went fishing and swimming and camped by the river with his cousins and spent time with his aunts, uncles and grandparents at the Timothy Red Dog place. He lived in Rapid City with his mother and he was actively into baseball where he won many league games and tournaments and received many awards for his athletic abilities. Michael also lived in California when he was young.

Michael entered the military, serving in the US Army, from which he was honorably discharged. He attended SDSU in Brookings for a year and a half, and then he returned to Eagle Butte where he spent the rest of his time.

He worked for the Cheyenne River Sioux Tribe after college. He was a security guard at the Bingo Hall, and a laborer for the Sanitary Landfill. His last employment was as an Environmental Technician for the Tribe’s Environmental Protection Department; where he worked for many years in different areas including the Radon Testing Program, Air Quality Program, Gunnery Range and Tribal Brownsfield Grant. Michael learned the aspects of grant writing and monitoring his programs closely and keeping them in compliance.

Mike met many friends and family along the way, and once you became acquainted with him, he knew you for life. He liked to joke and tease, and he always had a smile, a hug or a handshake for everyone no matter where he would see you. Mike was great at coming up with nicknames for all of his friends. He loved children and was always respectful to the elderly. Michael will be greatly missed by all who knew and loved him.

A one night wake service was held on Monday, July 10, 2017. Funeral services were held on Tuesday, July 11, 2017 at St. John’s Episcopal Church in Eagle Butte with Mother Mikayla Dunfee presiding. Burial followed in the Eagle Butte Cemetery with military honors.

Luce Funeral Chapel of Eagle Butte has been entrusted with Michael’s arrangements. (www.familyfuneralhome.net)