More to Rogers than meets the eye

Cobbler junior has a unique history 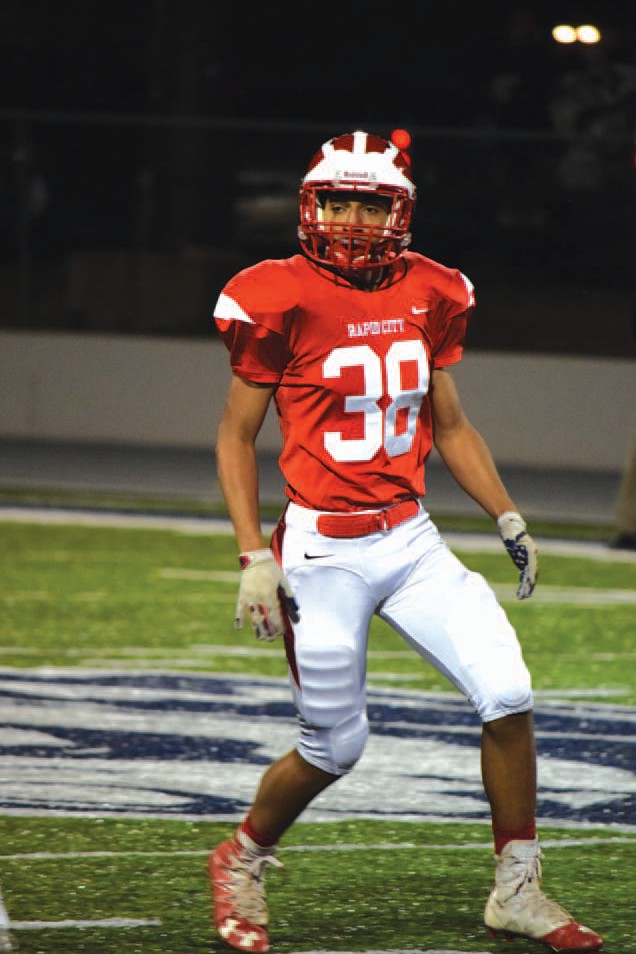 RAPID CITY— One signature aspect of Rapid City Central Cobbler Red has always been the high percentage of Lakota athletes compared to other high schools. This heritage started with basketball coach Bill Mitchell back in the 1950’s, and the legendary Vince Whipple, and then continued for several decades with Mitchell’s protégé Dave Strain, and his best ballplayer, Marty Waukazoo.

Many Class A schools had standout Lakota athletes, but no school except Central seemed to have just average Lakota athletes, guys who had the tools to help the team and make good plays, guys every team needs to be a success. Mitchell and Strain no longer influence anything at the school, but the present football Head Coach, Erik Iverson, maintains that Lakota tradition. The battle cry of the Cobbler football team is “Hoka Hey!”

One of the players on this year’s roster is a soft-spoken 5- 11, 155-lbs junior named TeJon Rogers. People see number 38 on the field, and covered by shoulders pads and football helmet, he’s just another Cobbler. Underneath his gear, there is a unique history worth sharing.

Rogers is White, Black, Hispanic, and Lakota. He is the grandnephew of Native Sun News Today publisher Tim Giago, and there are very few Lakota on this planet overall, fewer still with a background like Rogers.

This would be the place to include a great quote from Rogers, but he is not the quotable type. He tends to address the matter at hand and leave elaboration to other people.

You ask him about his football, he says, “I been playing since Eighth Grade. I mainly play cornerback on defense. I sometimes play wingback on offense, but that’s for JV.”

You can ask him where he went to school: “I went to General Beadle (Elementary). I went to North Middle School, and now I am at Central.”

You can ask him what his strengths as a ballplayer are, but he can’t answer. He is not comfortable bragging on himself. If you ask him his weaknesses, he does have a quick answer: “Being more of a leader.”

Rogers tends to mind his own business. He is a well-mannered kid, doesn’t get into trouble, and has few hobbies outside of football and track and Play Station 4. If he lacks leadership, it is because he is not the type to get worked up or over involved in things.

His mother, LaTasha Rogers is Black, and his father, Chris Jennings, is an enrolled member of the Oglala Lakota Tribe. Jennings is a veteran of Iraq, and while he was serving there, his vehicle ran over an Improvised Explosive Device (IED), which blew Jennings straight up out of the machine gun turret. Luckily, he was tethered, and he snapped back down into the turret but caught the edge and badly damaged his back. Partially paralyzed, Jennings was still able to regain his senses, and level his .50-caliber machine gun at the van that had set off the IED. That is why he is still here today.

Back and shoulder surgery followed in Germany. Steel mesh braces his spine. He is on permanent disability and suffers from PTSD. Even after a decade, Jennings struggles to adjust to civilian life.

Rogers is not especially close with his stepfather, Antoine, and although he spends time with his biological father, part of the PTSD struggle is to maintain responsibilities and relationships. Jennings does not attend many of his son’s football games or track meets.

Rogers sometimes goes and spends time with his dad: “Mostly he stays in his room. We don’t really go out and do anything.”

While he is at his dad’s, Rogers does what he does at home, he plays video games.

This glass may seem half empty, but it is critically half full. Despite having every dysfunctional indicator is place, multiple minority disadvantages, parents no longer together, no consistently positive male authority figures, Rogers is a surprisingly gentle, respectful and well-adjusted kid.

His days are divided into “Red and White.” On Red days he has English, Math, US History, and Spanish II. On White days, he has Chemistry, Weight Lifting, Math and US History. He gets just under an hour for lunch and usually takes off somewhere to escape the cafeteria menu with his buddies.

Rogers has a 14-year-old sister, Pares, who plays volleyball for Central. He has two older sisters, Danielle, 22, and Cache, 21, who are both in the Army. After he is graduated, Rogers wants to get more education: “I want to do something that involves cars. I like working on cars.”

It’s a fairly modest objective, but it is a practical, do-able thing, and that is how Rogers tends to look at life. His social life doesn’t involve partying, chasing girls, and despite living in what many have characterized as a racist community, Rogers says it has never been much of a problem: “I’ve gotten through pretty easily. I haven’t encountered much racism. Some kids, out of anger, will say something. I’ve been called the N-word a lot. It doesn’t bother me.”

Coach Iverson feels Rogers has talent and potential but that “he missed a lot of off-season workouts.” He says Rogers “is very relied upon for special teams.”

Rogers says: “Yeah, I should have went to more football workouts. I kinda messed up. I wanted to hang out with my friends.”

Rogers plans on doing better over the summer, getting ready for his senior year of football. He is also involved in track, runs the 100 and 200 meters: “I’m doing indoor track meets starting in February.”

Most successful athletes have a big support network. Despite having none of those advantages, Rogers continues to plug away, to focus on long term objectives and contribute where most others in his circumstance will never even bother to start.