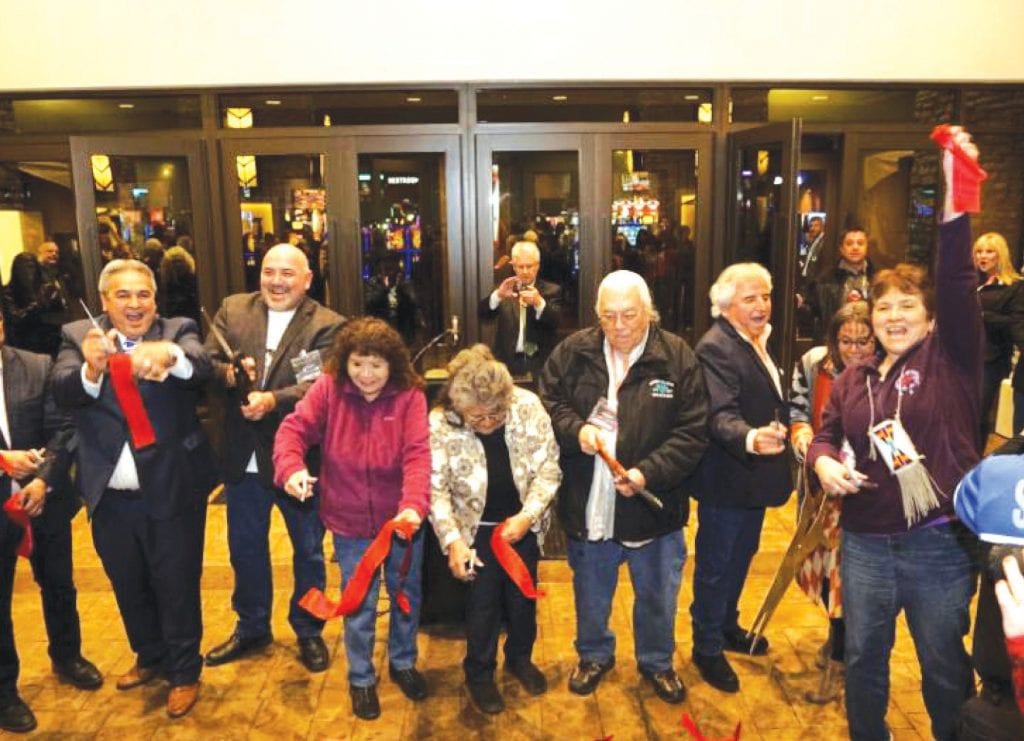 Ribbon cutting at the Grand Opening of the Spokane Tribe Casino.

The Spokane Tribe casino is 38,000 square feet and includes 450 slot machines, 12 table games, a full-service restaurant and bar, and an express deli. The new casino is part of long-term plan to expand the development, which includes a $400 million master plan to add a hotel, cultural center, entertainment venue and retail shops on the 145-acre site.

According to press statements,

Spokane Chairwoman Carol Evans said, “We want to provide opportunities, we want to give our young people the tools to help them succeed.” She added, “many supporters of the Spokane Tribe Economic Project helped with our efforts to make the casino become a reality, and we are grateful to share this celebration with them.”

The grand opening represents a multi-year process to make the opening of the casino a reality. After a nine-year study, in 2015, the U.S. Department of the Interior announced its approval of the casino June 15, 2015, and Washington State Governor Jay Inslee gave final approval on June 8, 2016, making way for the construction. The tribe hosted groundbreaking ceremonies in November 2016. The tribe says the built-out casino complex will support more than 5,000 jobs with an annual payroll of about $66 million.

NIGA Vice Chairman David Bean said, “It is an honor to celebrate this grand opening with the Spoke Tribe. The Spoke Tribe are the pioneers of gaming in the Northwest, and this grand opening is an example of their perseverance, persistence and their ability to overcome many obstacles that have made this celebration a reality. Bean added, “It also represents more than a grand opening of another tribal gaming operation in Indian country; it represents a catalyst that will provide additional critical revenues to build upon the tribal government services beyond gaming. I congratulate the Spoke Tribe on this outstanding grand opening event.”

Vice Chairman Bean provided shared the national impacts that Indian Gaming has on the American economy. Indian Gaming Operations generated $31.2 Billion in revenues and $4.21 Billion in ancillary revenues through hotels, restaurants, shopping malls, resorts/ spas and other spending. Total Revenues generated from Indian Gaming was $35.41 Billion in 2016. This represents a 4.4% increase over 2015. In 2016 Indian Gaming provided almost 308,713 jobs throughout the Country plus an additional 4,000 Regulatory Staff are also employed for a total of 312,719 jobs generated by Indian Gaming. 332,417 indirect jobs are created through Indian Gaming, totaling 679,417 direct and indirect jobs. These jobs equate to improved quality of life for those employees and excellent benefits for healthcare, disability, and retirement. Indian Gaming is proud to be a partner in enhancing and improving our communities.