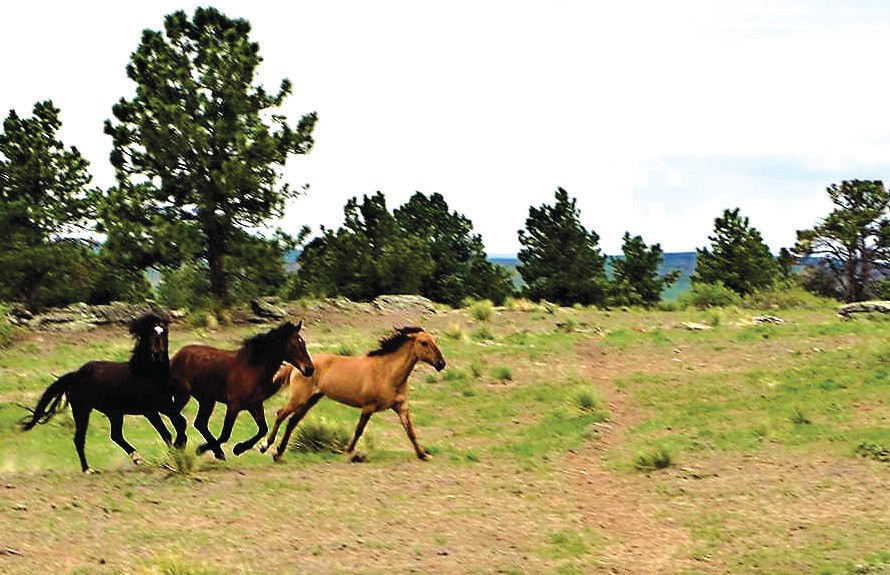 Black Hills Wild Horse Sanctuary, near proposed uranium mining and milling site, supports the Oglala Sioux Tribe in its argument for inclusion in heritage studies regarding the project.

“The NRC staff must conduct a study or survey of tribal cultural resources before granting a license,” the federal Atomic Safety and Licensing Board (ASLB) ordered at its headquarters in Rockville, Maryland.

Ever since the company began seeking permits eight years ago, the tribe has insisted on government-to-government consultation with regulators and involvement of tribal specialists in a thoroughgoing survey of artifacts at the site, said Oglala Sioux legal counsel Jeffrey Parsons.

“Given the public interest and the potential impacts of this project, they can do better, and they should do better,” Parsons told the Native Sun News Today on Oct. 27.

The proposed minefield and processing plant would be located on a 10,000-acre project area near Edgemont, in Custer and Fall River counties, adjacent to the Pine Ridge Reservation on unceded Lakota Territory lands illegally taken from the Great Sioux Nation in violation of the 1868 Ft. Laramie Treaty with the U.S. government.

“The discovery of an Indian camp and prehistoric artifacts in the tribe’s treaty and aboriginal territory at issue in this application implicates important tribal interests such that the tribe’s rights are threatened by the applicant’s mining activity,” former Oglala Sioux Tribal Historic Preservation Officer Wilmer Mesteth testified in permit hearings.

He complained of “the failure to involve the tribe in the analysis of these sites, or to conduct any ethnographic studies in concert with a field study.” The tribe requested “that additional comprehensive and meaningful surveys be conducted and that other tribes should also be involved.”

The NRC staff based its licensing on studies by Augustana College contracted by the South Dakota State Archeologist’s office under a 2008 Memorandum of Agreement with the permit applicant. The studies identified 217 sites, 81 of which were yet to be evaluated, according to state records.

The open-site survey methodology that staff proposed to tribes in February 2013 meant tribes could participate by sending representatives to examine any site area during a one-month period. The offer included per diem for three representatives from each tribe, mileage reimbursement, and a $10,000 no-strings-attached grant from Powertech (USA) Inc. to each tribe.

The appeals board found the results of this offer insufficient to uphold the agency’s responsibilities under the National Environmental Protection Act, or NEPA, “to protect and preserve cultural, religious, and historical sites important to the Native American tribal cultures in the Powertech project area.”

It said, “The staff failed to fulfill this obligation because the Final Supplementary Environmental Impact Statement (FSEIS) for the project “does not contain an analysis of the impacts of the project on the cultural, historical, and religious sites of the Oglala Sioux Tribe and the majority of the other consulting Native American tribes.”

It determined that staff “must conduct a study or survey of tribal cultural resources before granting a license.”

Like staff, Powertech (USA) Inc. blames the Oglala Sioux Tribe for failure to obtain any information on the Native American cultural resources missing from the FSEIS. According to Powertech, “The pivotal reason that no amicable solution can be reached . . . is that the tribe will not even participate in the identification phase of this process.”

The Oglala Sioux Tribe maintains the “NRC staff has in its possession but has not provided in monthly reports, emails, letters, invoices and other documents addressing Powertech’s refusal to pay for NRC staff time spent complying with the board and commission orders.”

The staff has been “trying to ask the board and judges to let them off the hook, instead of doing the work they should have done eight years ago,” Parsons said. “We’ll continue to press this until they do it right.”

The ruling dispenses with all but the last of the seven contentions the ASLB admitted from the tribe and allies, including Oye Aku (Bring Back the Way), Black Hills Wild Horse Sanctuary owner Dayton Hyde, and cattle rancher Susan Henderson.

The allies, known as the Consolidated Intervenors, concur with the tribe’s objections to the open-site inspection approach, listing the paucity of site visits, tribal elder involvement, ethnographic studies, scientific methodology, and government-to-government consultation.

In the Oct. 19 ruling, the panel bowed to staff and applicant’s petitions to dismiss the tribal complaint violation of the National Historic Preservation Act requirements for tribal consultation. The ASLB stated:

“To be sure, the record before the board once more presents a close call as to whether the NRC staff provided a meaningful opportunity under the NHPA for the Oglala Sioux Tribe to consult concerning the Dewey Burdock project site.”

Nonetheless, a set of three recent instances of communication between the staff and tribe “satisfies, at a bare minimum, the NHPA’s requirement that the NRC staff consult with the Oglala Sioux Tribe,” it ruled.

The instances, which responded to board stipulations, spread over the past two years and consisted of “multiple attempts at direct correspondence, a May 19, 2016 face-to-face meeting, and a Jan. 31, 2017 teleconference,” the ruling states.

“Arguably, much of the rest of the NRC staff’s consultation efforts, whether by email or letters to the Oglala Sioux Tribe, were focused on form over substance, or quantity over quality,” the board said.

The staff and applicant had moved for dismissal of the NHPA complaint, arguing that after seven years of consultation, “opportunities for the tribe have passed the point in time where the ‘reasonableness’ of continuing the process no longer exists.”

The board concluded, however, that several remaining tribal NEPA arguments may have “reasonableness,” specifically, the challenge to the scientific integrity of the open-site survey method, lack of a trained surveyor or ethnographer coordinating it, the number of tribal members invited to participate in the survey; the length of time provided for the survey; and the range of tribes invited to participate in the survey.

The overseers chided both parties in the dispute for foot-dragging over survey methodology, which has “produced a hopeless impasse…. No one party is singularly to blame,” they said, adding:

“The record before us also suggests that neither the NRC staff nor the Oglala Sioux Tribe could be considered highly responsive as the consultation process has unfolded over the past two years.” In fact, they said, both parties “have appeared unwilling and/or unable to step away from their original negotiating position and move toward compromise.

“Both parties appeared to be reluctant to be the first to make a concession and offer a proposal that varied in any substantial degree from its original bargaining position.

“At a minimum, when counsel for any party specifically requests that it be included as a recipient to a communication with its client, that request should be honored,” they said.

The ASLB recognized that the staff had repeatedly kept tribal legal representatives out of the loop after the lawyers had requested notification.

In addition to litigating the administrative appeal, the tribe is suing the Nuclear Regulatory Commission in U.S. District Court for granting the radioactive materials-handling permit before resolution of charges on NEPA and NHPA violations,

To prod the parties’ progress toward reconciliation in the appeal, the panel set up a monitoring schedule, with the first date for a conference call set Nov. 13.

The panel offered the parties the options of: filing a joint motion for a settlement judge to help find a resolution that would justify dismissal of the remaining contention, or conferring with one another to reach an agreement that would justify dismissing it, or leaving the staff to select a method for addressing FSEIS deficiencies on its own before again filing for dismissal, or “prepare for and participate in” an evidentiary hearing on the reasonableness of the staff’s open-site survey site terms.

“The question of what constitutes an appropriate methodology for identifying Sioux tribal cultural resources on the Dewey-Burdock project site is now on a course to be resolved before the board in 2018,” panelist G. Paul Bollwerk III said in “Additional Views” regarding the ruling.

Noting that “the NRC staff ultimately is responsible for shaping the cultural resources survey,” Bollwerk suggested “important components in such an effort may well include” obtaining and applying ethnographic data from tribal elders or other knowledgeable sources to identify culturally sensitive areas, as well as logistical support, drone technology, light detection and ranging.

Bollwerk warned that the parties should be considering the costs of the options to either concur on dismissing the final appeal item, reach a survey methodology satisfactory to both, or proceed to an ASLB evidentiary hearing process scheduled to start June 11, 2018 and result in an initial board decision four months later on Oct. 12.

Azarga Uranium Corp. announced that it intends to have the final contention resolved by the second quarter of 2018.

The decision “provided a clear path towards resolving the only other remaining contention for the NRC license,” said Azarga Uranium Corp. President Blake Steele.

“The company will continue to work with the NRC staff and other stakeholders to ensure that the only remaining contention is resolved in a timely manner,” he said in a media advisory.

“We’ll see what they do now,” Parsons responded.